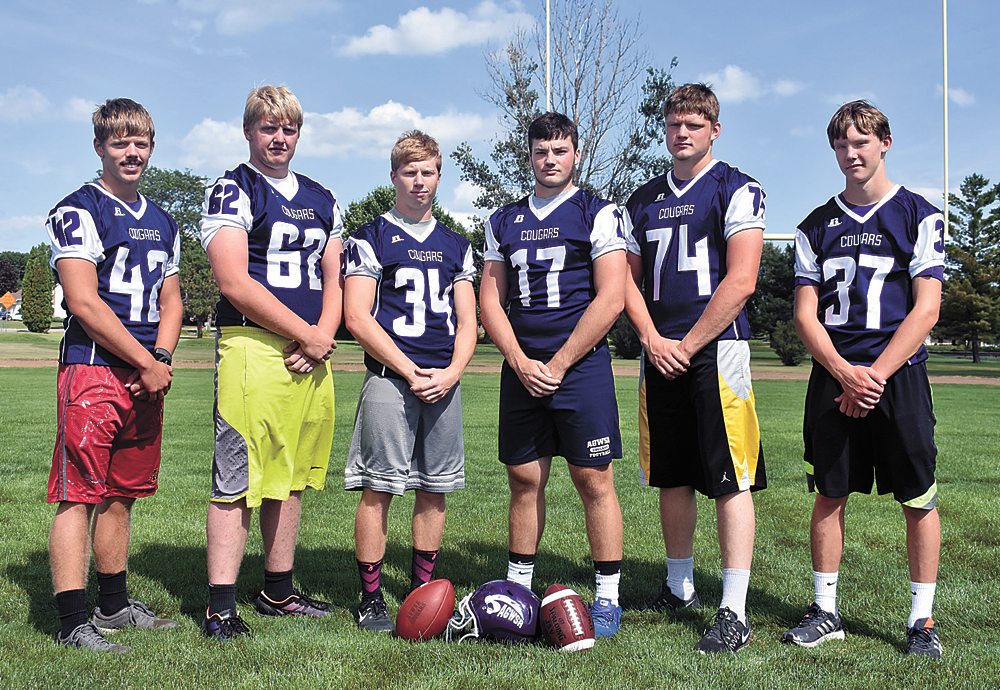 ACKLEY — Last year the AGWSR football team experienced a lot of success in their first year at the 8-man level, going 7-2 in the regular season and reaching the playoffs. However, after a first-round postseason exit, Cougars head coach James Koop said the team isn’t satisfied with how its season ended and wants to play better against quality opponents.

“All the teams we lost to last year were high-caliber teams, but we didn’t lose well,” Koop said. “We weren’t competitive in those games, and that is something we need to fix. Yeah it’s been great to be in the playoffs the last five years but you also want to get out of the first round. That is our goal, but we as coaches have to put the kids in positions to be successful.”

AGWSR only lost three times in 2016: once to eventual state champ Don Bosco, once to 8-man District 2 champion Turkey Valley and once in the first round of the playoffs to Central Community of Elkader.

Heading into 2017, the Cougars know the game better than they did before last season and they boast a number of returners who will help their cause, like first-team all-district running back Liam Stubbe and second-team selections Joe Wiarda and Aaron Roelfs.

Koop said Roelfs is primed to take over at quarterback for AGWSR, though he could see some time in other positions as well. 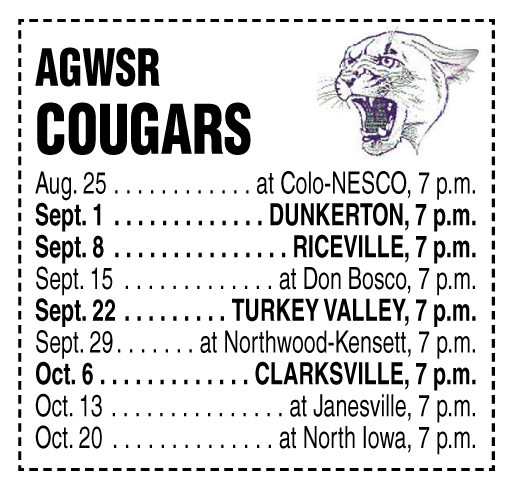 “Aaron has the experience and played some last season, but to their credit, I tell the kids to know more than one position and Aaron played tight end and fullback for us last year too,” Koop said. “He was on the field on offense, he just didn’t take the reps at quarterback.”

As for the skill positions, Stubbe will be the feature back and he will be surrounded by players who Koop said have a marked difference in speed compared to last season.

“We incorporated speed and agility training before weights three days a week last April, so I am hoping that pays off,” Koop said. “Liam looks quick and another year stronger. Luke (Starr) is quick. Alec Stahl, if you’ve followed our track team over the years, he has speed. We are hoping we can put those people in key positions and certain formations to make us more competitive in those big games against those teams that had more speed than us last year like Turkey Valley, Don Bosco and Central Elkader.”

As for the offensive line, in 8-man you only play with three linemen and the Cougars bring back two starters from last season in Ethan Ubben and Sawyer Heitland. Koop said those two should continue their progress this season, and he could see a couple other guys getting in the mix up front as well.

“Austin Aukes is a senior and he has put a lot of hard work in, he could factor in somewhere or be a quality sub,” Koop said. “Center is a toss-up between junior James Macy and Tanner Weichers, a sophomore. Both of those are quality kids who have worked hard in the weight room and done everything we ask. That is just going to work out in practice to see who starts.”

Defensively, Koop said guys like Stubbe, Wiarda, Roelfs and Starr will play a big role in what they are trying to do, but they are also looking around the roster for some other guys to step up and earn some playing time.

“Aaron will be a linebacker, but that’s hard too because a lot of coaches don’t like to play their starting quarterback at linebacker,” Koop said. “We have Starr and Stubbe as corners, Auckes will hopefully sure up the middle as nose guard but he has been out of football two years. We hope there are some kids who haven’t had experience but want it that will step into some roles for us too.”

Given the spread-out nature of 8-man football, teams tend to score more points. Koop said it is nearly impossible to keep teams from putting up numbers in this level, but what you can control is how quickly they score said points.

“We work on turnovers and stuff like that, but the biggest thing in 8-man is trying to eliminate the big plays,” he said. “That is a lot harder in 8-man than it is in 11-man, but if you can eliminate those quick-scoring plays you are better. Someone asked me last year what’s a safe lead in 8-man, and I told them it isn’t 21 points in the fourth quarter because of the potential of the big play happening. If you can eliminate those big plays and make them grind and make a mistake happen, that’s a good goal to have.”

Though they made the playoffs in their first year in 8-man, Koop said that definitely doesn’t mean they are guaranteed a spot in this year’s postseason, especially given the competitive nature of their district.

“Do we want to make the playoffs? Absolutely, but with us I think there are four teams that have a legitimate chance to win the district title or be district runner up,” he said. “It is going to come down to injuries and how the ball bounces in those games.”