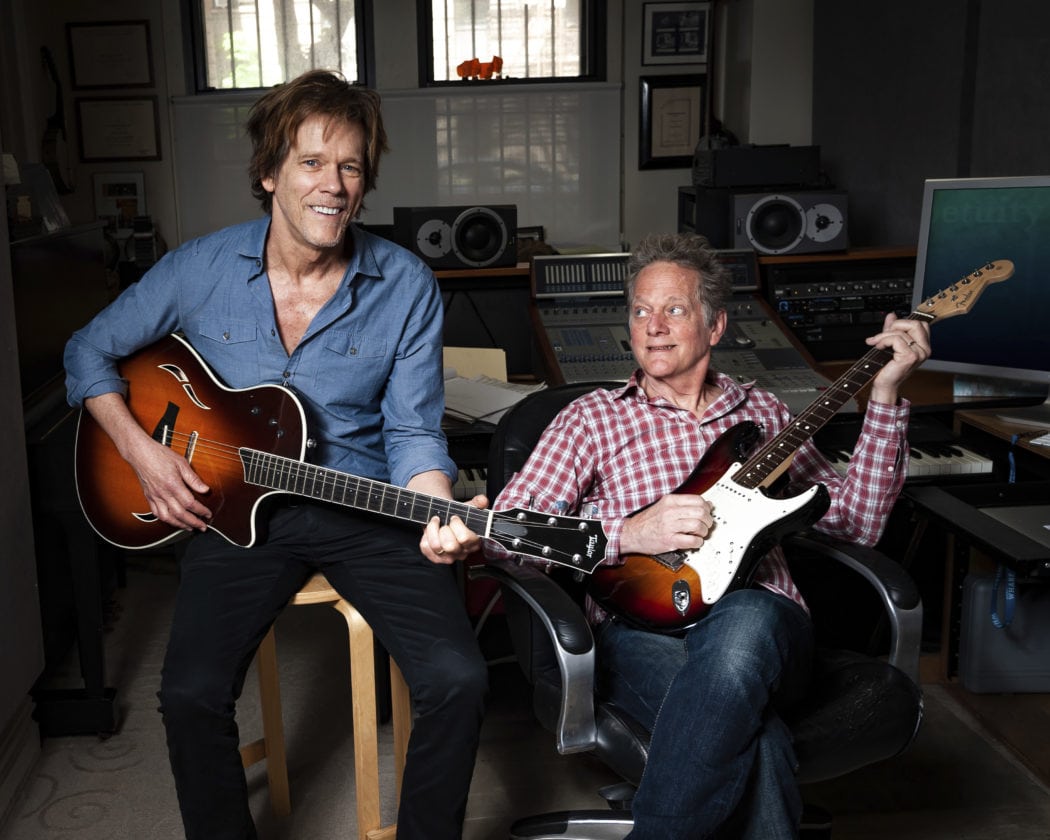 In this May 28, 2018 photo, brothers Kevin Bacon, left, and Michael Bacon pose in New York to promote their self-titled album out Friday. The pair will also launch a three-month concert tour. (Photo by Christopher Smith/Invision/AP)

But releasing music for those well-known for their roles in movies haven’t always been accepting or a breeze.

“It’s crazy how actors bring out some kind of hostility from a rock music crowd that rock (fans think), ‘We have our idols and we don’t want you to try to share that.’ That kind of hero worship drives me crazy. I just find it such nonsense,” Michael Bacon, Kevin’s older brother and bandmate, said in an interview this week.

“I will say though that resistance to that idea comes from rock press and rock radio, but not from rock musicians. In my experience, when we play with musicians, musicians are incredibly welcoming of us. That’s not just studio guys, guys we’re paying, it’s like big musicians,” Kevin, 59, added.

“And the other thing is you’ve been accepted as a professional musician,” Michael, 68, said looking to his brother. “It takes a while to do that.”

The Bacon Brothers have been on the music scene for over two decades, releasing their debut album, “Forosoco,” in 1997. Their latest, a self-titled 10-track set, comes out on Friday, the same day they’ll launch their three-month U.S. tour. (On Friday Johansson will release an EP with Pete Yorn and Miller’s band, Sons of an Illustrious Father, will drop its sophomore album).

Kevin and Michael recall years ago using another name for their band when releasing music to see what attention they would get.

“What happened is they started distributing the record to FM radio and didn’t say who it was and people really were playing it,” Michael said. “We got a little traction from it but it’s a lot of work to do that, too.”

“The Bacon Brothers” was produced by G.E. Smith, the former “Saturday Night Live” music director and guitarist of Hall & Oates. It starts off with “Tom Petty T-Shirt,” written shortly after the rock icon died.

Kevin said he wrote the song based off wanting to fix a problem in marriage, relationship or friendship.

“You want to make it better. You want to step in and make everything right. Sometimes that’s a little out of your skill set, at least I find for myself when it comes to me and my relationship with my wife, or even with my relationship with my kids,” he said. “I don’t always say the right thing and do the right things exactly, to fix whatever that situation is. So it’s a little bit like, ‘Well, I don’t know if I can help, but here’s my Tom Petty T-Shirt.'”

The album doesn’t only feature the Bacon brothers: Kevin’s famous wife and daughter — actresses Kyra Sedgwick and Sosie Bacon (“13 Reasons Why”) — sing on the album.

The Philadelphia boys say because the band isn’t their first priority — Kevin has been a successful actor since his 20s and Michael is an Emmy-winning composer and teacher — they are able to flourish as a musical group.

“It works out better that way then if we said, ‘This is the only thing that we’re going to do.’ When we started the band, it was a very small thing,” Michael said. “The band was originally put together for one gig in Philadelphia.”

The duo’s tour starts in Rocky Mount, Virginia, on Friday. They wrap on Aug. 11 in Glenside, Pennsylvania.

“What’s unique about our band is most bands that have been around playing for 25 years are playing off hit singles from 20 years ago. We don’t have anything. We have never had a record come off.