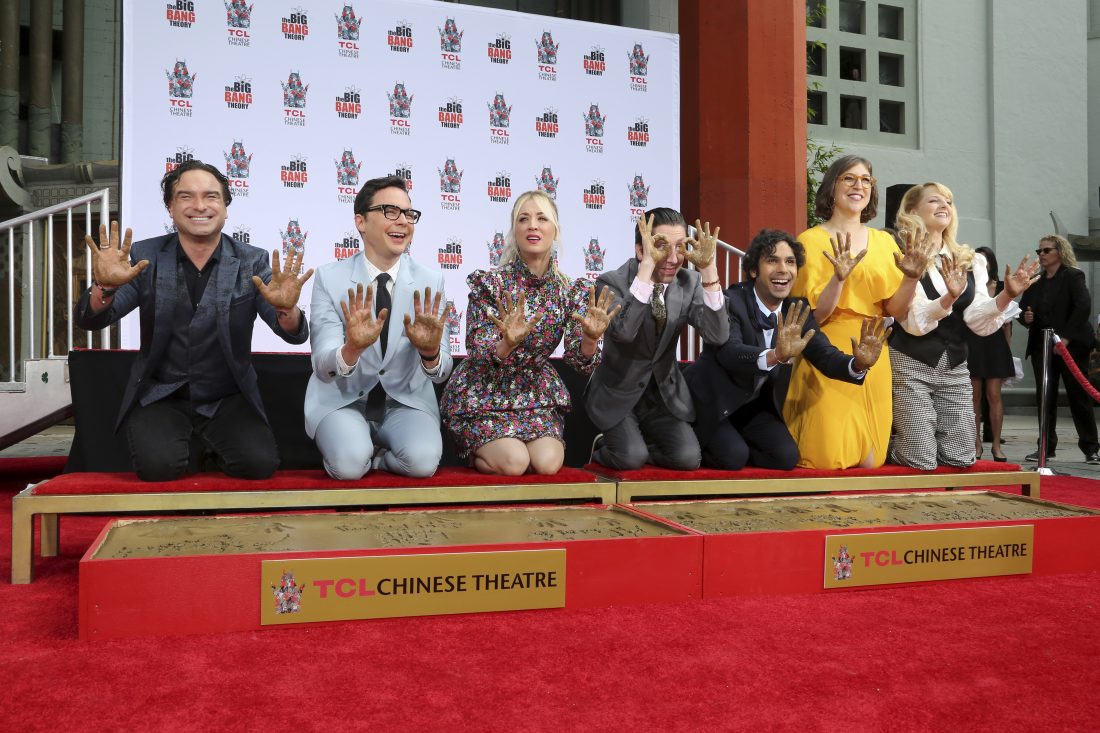 Johnny Galecki, from left, Jim Parsons, Kaley Cuoco, Simon Helberg, Kunal Nayyar, Mayim Bialik and Melissa Rauch members of the cast of the TV series "The Big Bang Theory," show their hands after placing them in cement during a hand and footprint ceremony at the TCL Chinese Theatre on Wednesday, May 1, 2019 at in Los Angeles. (Photo by Willy Sanjuan/Invision/AP)

BURBANK, Calif. — Hugs and tears punctuated the final taping of “The Big Bang Theory,” a lovefest for its stars, crew and audience alike.

There were plenty of punchlines as well, as the true-to-form hit comedy about scientists and those who love them wrapped the two-part, hour-long finale that will air in mid-May on CBS.

“This show has touched so many hearts,” an emotional Kaley Cuoco told the fans who filled a Warner Bros. soundstage Tuesday. She shared a comment made by series creator Chuck Lorre at a reading of the final script: ” ‘The Big Bang Theory’ will live on in our hearts forever.”

Johnny Galecki, who plays husband Leonard Hofstadter to Cuoco’s Penny, thanked the audience and called the top-rated comedy’s 12-season run “a dream come true for all of us.”

It was definitely a pinch-me moment for those lucky — and persistent — enough to be on hand for episode No. 279. Some, urged by audience warm-up comedian and emcee Mark Sweet, paid tribute to the series that turned the really smart set into unlikely crowd-pleasers.

Malerie Shakter of Oakland, California, who works in the tech industry, said she’s been inspired by the powerful female characters portrayed on the sitcom. She waited in line for 14 hours to get a seat, she said, adding, “I would do it all over again.”

Jim Parsons, who stars as awkward genius Sheldon Cooper, had a key fan in attendance: His mother, Judy Parsons. The actor, a four-time Emmy winner for the role, looked relaxed and even broke into a few dance moves between shots.

Parsons is keeping ties to his character, as an executive producer of “Young Sheldon,” the CBS spinoff about the future physicist’s childhood in Texas that stars Iain Armitage in the title role.

The cast, including Simon Helberg, Kunal Nayyar and Melissa Rauch, lingered after taking their final bows. Mayim Bialik, who plays neuroscientist Amy Farrah Fowler, hugged Lorre tightly on the stage that was named after the series last February. A plaque outside the building commemorates other projects filmed there, from movie classic “Casablanca” to the TV series “Cheyenne” in the 1950s and 1960s.

The celebration continued Wednesday, as the stars put their handprints in cement at the TCL Chinese Theatre, a nearly century-old Hollywood salute to its famous citizens.

The “Big Bang Theory” episode taped Tuesday will air as the last half of a two-part finale on May 16.