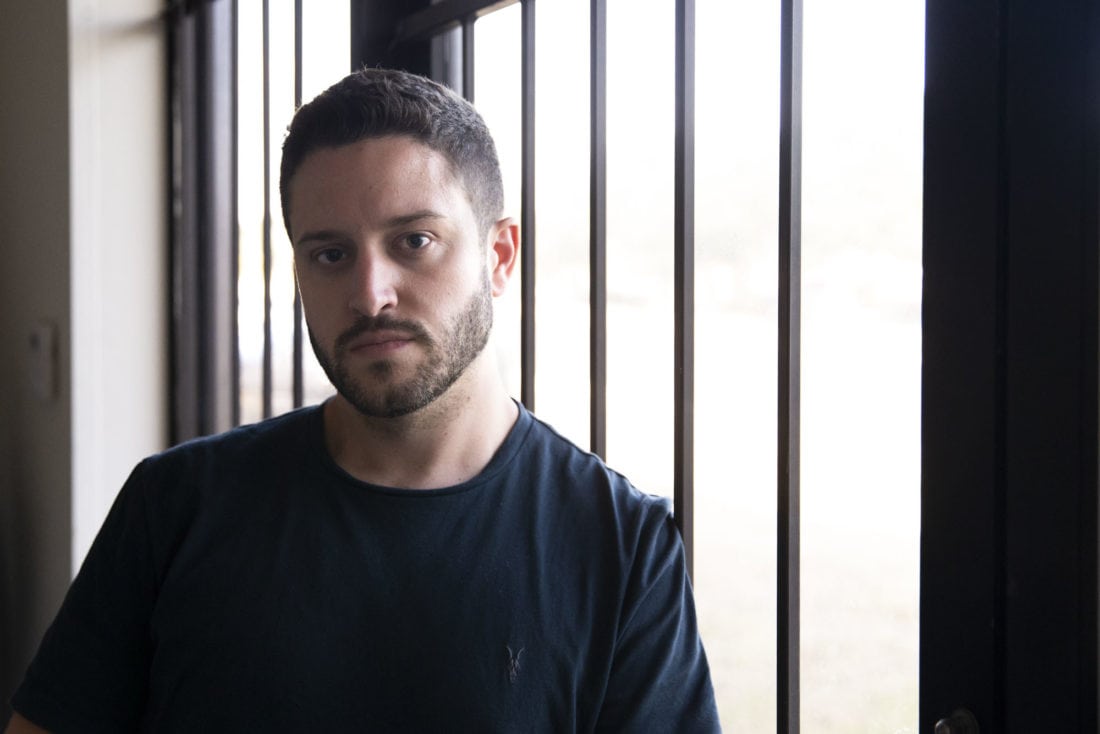 Cody Wilson poses for a portrait in the Defense Distributed office in Austin, Texas, on Tuesday, Aug. 7, 2018. The founder of Defense Distributed, Wilson has been in a long legal dispute regarding his ability to post the instructions to create 3-D printed firearms on his website. (Lynda M. Gonzalez/Austin American-Statesman via AP)

AUSTIN, Texas — Cody Wilson found his calling when, in 2013, he successfully fired the first gun made on a 3D printer.

The Austin American-Statesman reports that very week, he dropped out of his second year at the University of Texas Law School, which wasn’t much of a sacrifice because he’d pretty much stopped attending classes as his interests were captured by a revolutionary idea: The internet was more powerful than governments, gun-control advocates and regulations limiting the ownership of firearms.

“I chose to print the gun. That’s a choice that you can’t back away from,” Wilson, 30, said from the North Austin office and manufacturing center of Defense Distributed, the company he founded to expand the availability of do-it-yourself weaponry. “When you’ve got a better idea, you can’t just stay in class all day.”

Wilson posted how-to plans for his gun online and said he wanted to do the same for future 3D-printed firearms, launching a national debate — and a still-raging legal battle — over the wisdom of creating largely plastic weapons that would be difficult to detect and impossible to trace without serial numbers required for most other manufactured weapons.

But for Wilson, do-it-yourself guns were a logical extension of crypto-anarchy, a philosophy he embraced that seeks to use a free internet and encryption technology to reduce government influence over people’s lives.

“I will continue to fight anyone who will try to sue me and say that I can’t do this,” he said.

Wilson’s manufacturing plans for his 3D-printed gun, a single-shot pistol he called the Liberator, were downloaded more than 100,000 times before the U.S. State Department ordered the blueprints removed, saying they violated federal law on exporting military weaponry.

Wilson sued the State Department with the goal of letting everybody with a computer and access to a 3D printer decide for themselves whether to create and own a self-made pistol.

Attention waned while the legal battle ground on, but the bubble popped this summer when the State Department reversed course and chose to settle, giving Wilson a license that allows him to distribute 3D-printer gun blueprints.

Suddenly, Wilson was back in the national spotlight, a role he doesn’t shy away from.

Wilson and Defense Distributed were sued in four states by officials and gun-control groups hoping to stop the publication of gun designs.

Those efforts now focus in Seattle, where 19 states and the District of Columbia persuaded a federal judge to temporarily block Wilson’s settlement with the State Department. A hearing on the matter is set for Aug. 21, with a decision expected by Aug. 28, when U.S. District Judge Robert Lasnik’s temporary restraining order expires.

Wilson also has given interviews to most major newspapers and TV networks.

Reporters frequently ask how he would feel, and whether he should be blamed, if his downloaded plans produced a weapon used in a fatal shooting or other crime. Wilson shrugs off the question.

“I suppose it depends, doesn’t it? What type of 3D-printed gun? Whose 3D-printed gun? I’m blamed, then, for all 3D gun deaths because, what, I inspired the genre of activity? I wouldn’t put it past someone,” Wilson said. “Also, it’s beside the point. I didn’t invent the idea of the gun.”

Wilson said he is fighting to protect his free-speech right to publish information on a matter of public concern, filing a lawsuit in Austin federal court accusing two officials — with more to be added soon — of violating his rights by dragging Defense Distributed “before all manner of far-flung criminal and civil tribunals in an effort to silence the organization.”

“People come to me and say, ‘Cody, tell us why you want to do it.’ No, no — more like all these authorities, all these powers, they will have to justify why they should have the right to stop me,” he said. “I won’t be shamed out of it or legally spoiled out of it. I’ll sue them all — sure, whatever.”

For Wilson, the public danger of 3D-printed guns is far outweighed by the danger posed by a government strong enough to block the free flow of information in the name of safety.

Wilson, an English major from Arkansas who moved to Austin to attend law school, did not grow up shooting guns and began his quest for a 3D-printed weapon with very little knowledge about firearms.

“I was a Boy Scout, sang in choir. I was class president of my high school,” he said.

A major influence, and a turning point in his life, came with the advent of WikiLeaks, a website and movement founded by Julian Assange, a leading crypto-anarchist, that specializes in publishing sensitive records acquired from governments and public officials.

Wilson proposed the Wiki Weapon Project, an effort to build the first 3D-printed gun, but a crowdsourcing website froze his account for violating its policy on raising money for weapons sales. Attention from the media and bloggers, however, allowed him to reach his $20,000 goal.

A pattern was born.

Wilson said efforts to block him only fuel his movement, noting that before the Seattle judge stepped in on July 31, gun blueprints were available on his website for five days and were downloaded and spread to other internet sites.

“A judge in Washington state can say, ‘Cody Wilson, take down your website.’ Of course, to some degree this information can be contained. But simultaneously, that order makes the information much more interesting and valuable to people who otherwise wouldn’t even care,” he said. “In a sense, being shut down like I’ve been every five years ensures that the information stays relevant, stays in the internet.”

The idea behind Defense Distributed was to create a nonprofit that distributed its intellectual property for all to use.

“The law had never considered such a thing,” Wilson said. “This is why it’s had such a problem grappling with me. Everyone always assumed that defense contractors contracted with the state, give their technology to the state. What happens when a defense contractor just gives its technology to the people? The state doesn’t have an answer. It struggles for one, embarrassingly, in the courts.”

Blocked from publishing plans for the Liberator, Defense Distributed began selling the $2,000 Ghost Gunner, a desktop mill that allows owners to complete the lower receivers for AR-15 and AR-10 rifles — that’s the portion of the weapon that attaches to the stock and carries the weapon’s serial number.

The income helped finance his recently settled lawsuit against the State Department while paying wages for 15 to 18 employees, Wilson said, though he also solicits donations from supporters.

The transition to small businessman has been interesting, he said.

“To run this lawsuit, I had to build a real company. It’s kind of tedious,” Wilson said. “All these guys have payroll. Some anarchist, huh? Pretty good capitalist for an anarchist.”

Wilson believes that guns, whether purchased or made on a 3D printer, are a benefit to society.