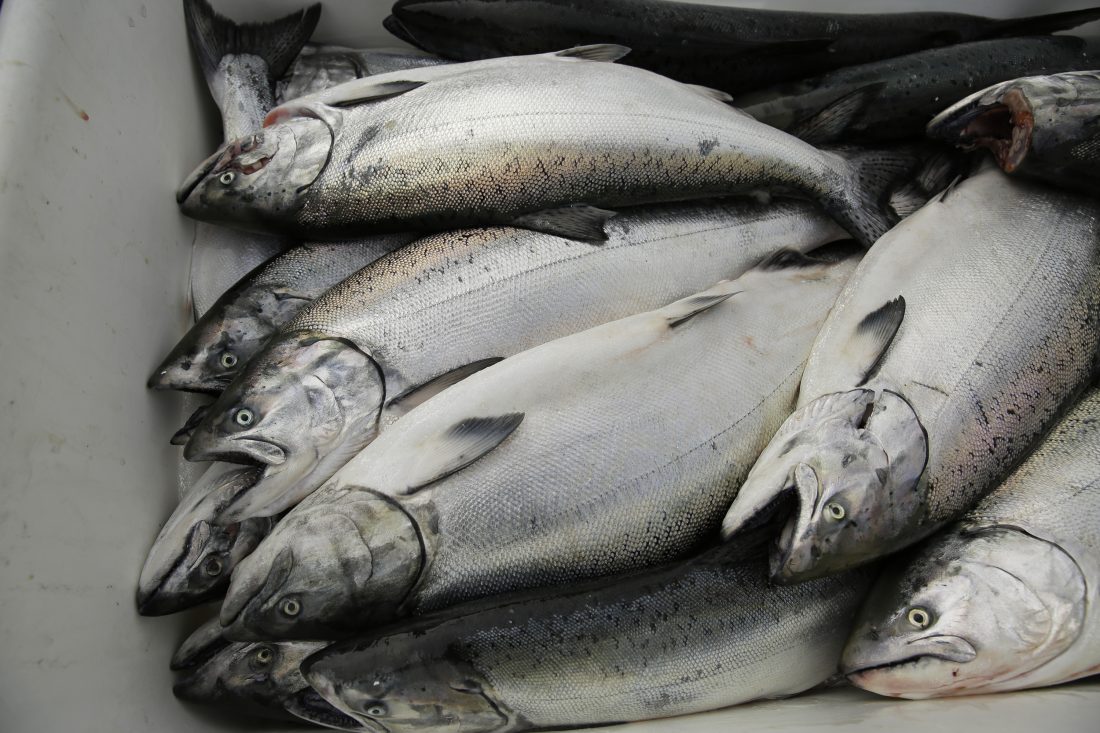 Salmon is seen after being unloaded at Fisherman's Wharf in San Francisco. California fishermen are reporting one of the best salmon fishing seasons in more than a decade, thanks to heavy rain and snow that ended the state's historic drought. It's a sharp reversal for chinook salmon, also known as king salmon, an iconic fish that helps sustain many Pacific Coast fishing communities. (AP Photo/Eric Risberg)

SAN FRANCISCO — Trolling off the California coast, Sarah Bates leans over the side of her boat and pulls out a long, silvery fish prized by anglers and seafood lovers: wild king salmon.

Reeling in a fish “feels good every time,” but this year has been surprisingly good, said Bates, a commercial troller based in San Francisco.

She and other California fishermen are reporting one of the best salmon fishing seasons in years, thanks to heavy rain and snow that ended the state’s historic drought.

Commercial salmon catches have surpassed official preseason forecasts by about 50%, said Kandice Morgenstern, a marine scientist with the California Department of Fish and Wildlife. Harvests have been particularly strong in Morro Bay, Monterey and San Francisco, but weaker along California’s northern coast.

“We’re really surprised to be seeing this many fish being landed so far this season,” Morgenstern said.

The salmon rebound comes after three years of extremely low catches that resulted from poor ocean conditions and California’s five-year drought, which drained the state’s rivers and reservoirs.

Over the past several years, regulators imposed severe fishing restrictions to protect chinook salmon, and officials declared federal fishery disasters in 2018 to assist fishing communities in California, Oregon and Washington.

This year’s adult salmon are the first class to benefit from record rainfall that filled California rivers and streams in early 2017, making it easier for juvenile chinook to migrate to the Pacific Ocean, where they grow into full-size fish.

Chinook salmon are also being helped by improved ocean conditions that have produced an abundance of anchovies, krill and other feed. Several years ago, an El Nino event brought unusually warm water to the Pacific Coast and disrupted the marine ecosystem.

“For the salmon fishermen who’ve been dealing with disaster for so long, this is an incredible boon to their livelihoods,” said Noah Oppenheim, who heads the Pacific Coast Federation of Fishermen’s Associations.

Anglers in the Pacific Northwest have not been so fortunate. A dearth of chinook returning to the Columbia River and Puget Sound are a major factor in the plummeting population of the region’s endangered killer whales.

In Alaska, state wildlife officials who oversee salmon are monitoring reports of fish dying in warm rivers. The state in July recorded its warmest month, and heat stress is suspected in the deaths of pink and chum salmon in rivers that empty into the Bering Sea, including the Yukon and Kuskokwim rivers.