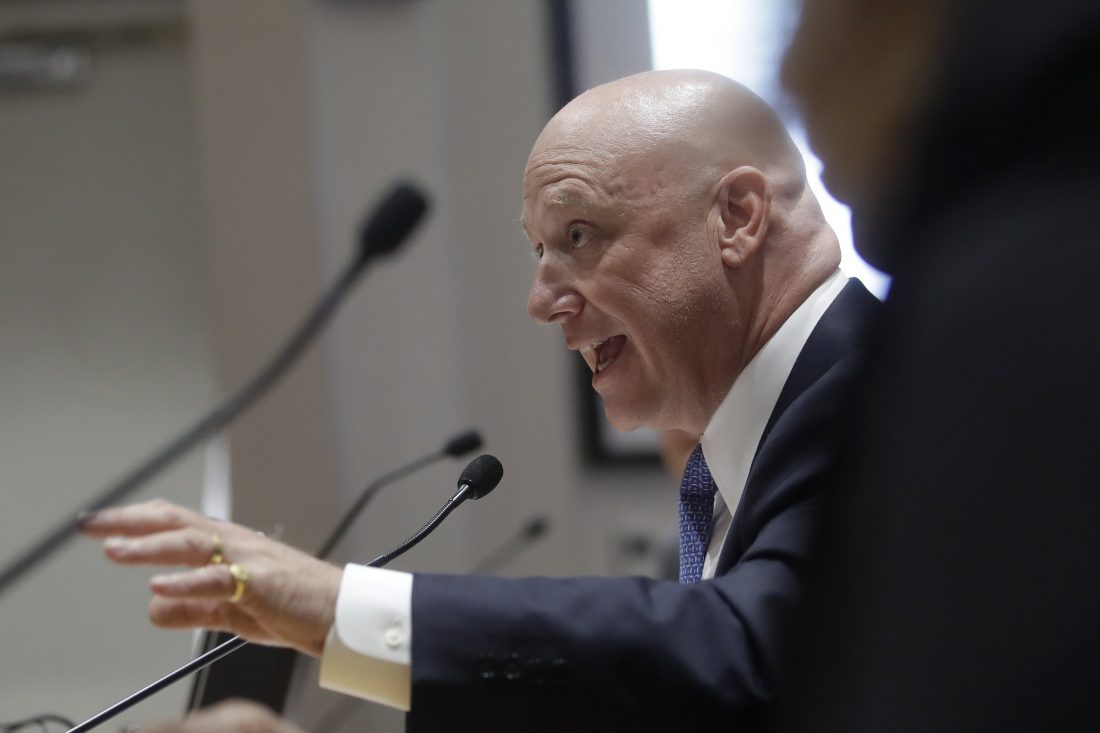 Marybel Batjer, president of the California Public Utilities Commission, called the emergency meeting Friday and ordered the executives to attend and explain themselves. She said she was “absolutely astounded” by what she thought were simple preparedness steps the utility could have taken.

“You guys failed on so many levels on pretty simple stuff,” Batjer said.

PG&E officials, even as they repeatedly apologized for their shortcomings in execution, defended their decision to cut power to more than 700,000 customer accounts in advance of dangerous winds that could have sparked wildfires.

“We actually didn’t have any catastrophic fires in northern and central California; that was the sole intent,” said Bill Johnson, CEO of PG&E Corp.

Gov. Gavin Newsom has blasted the San Francisco-based utility for what he called decades of mismanagement. Critics of the for-profit utility renewed calls to break up the company.

For much of the meeting, which lasted more than four hours, PG&E executives insisted they only had the public’s safety in mind when they cut off power. They promised to do better.

The company’s website had 1.7 million user requests an hour when it normally logs 7,000, officials said.

Andy Vesey, a PG&E executive, added that they did not think broadly enough and underestimated the needs of their customers and local governments. “We have to develop a mindset, or culture, of anticipation,” he said.

PG&E announced around 2 p.m. on Oct. 8 that it would be shutting off power at midnight to parts of northern and central California, saying that high wind forecasts could damage equipment and spark wildfires.

Panicked residents stood in long lines at supermarkets, hardware stores and gas stations, rushing to buy ice, coolers, flashlights and batteries to make sure their cars had gas.

The outages paralyzed parts of a state that has the fifth-largest economy in the world. Schools and universities canceled classes, and some businesses closed. Customers complained of overloaded call centers and a website that kept crashing.

“It’s not enough to do better in the future, when the harms were predicted and known,” said Melissa Kasnitz, legal director of the Center for Accessible Technology. “Real people experienced real fear.”

Wildfires in California caused by downed power lines and other utility equipment sparked fires in 2017 and 2018, including the Camp Fire last year that nearly wiped out the town of Paradise and killed 85 people.

PG&E said Monday that its systems were damaged in more than 100 places, and that those were spots that could have been a potential source of ignition for a wildfire.

Johnson, the CEO, said the utility will get better with each new pre-emptive outage as it works to upgrade its equipment so blackouts affect fewer people.

On Friday, Johnson suggested to Gov. Gavin Newsom in a letter that state leaders may want to consider having a state entity decide whether to shut off power in the future. Johnson said at the PUC meeting that he was not trying to offload responsibility, but that Californians may want to have the discussion given deep skepticism of the utility’s motives.

As for Newsom’s call for rebates to customers, Johnson said they are considering the idea but that could set “a dangerous precedent that any time the power goes out you might have some rebate or other thing.”

Berkeley resident and disability rights advocate Marg Hall said Friday before the meeting that the outages are more than an inconvenience for some people with disabilities and the elderly.

“Friends, that even if their power wasn’t shut off, suffered health consequences from the stress of knowing that they were going to be abandoned,” she said.

On Friday, Newsom appointed Caroline Thomas Jacobs as the first director of the state’s new Wildfire Safety Division, which was created earlier this year and tasked with approving utilities’ wildfire mitigation plans and connecting them with independent experts to assess the safety of electrical equipment.