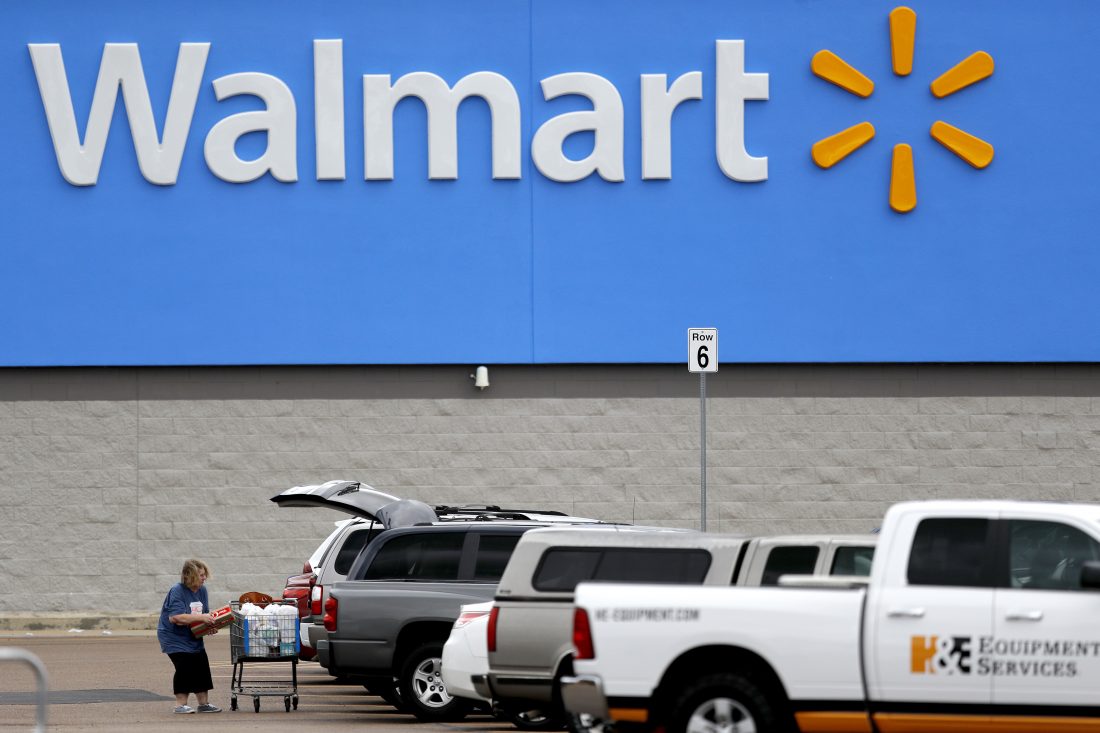 ap photo In this March 31 file photo, a woman pulls groceries from a cart to her vehicle outside of a Walmart store in Pearl, Miss. Walmart became a lifeline to millions of people as the coronavirus spread, and its profit and sales surged during the first quarter, topping almost all expectations.

NEW YORK — Walmart emerged as one of the few lifelines to millions of people as the coronavirus spread, leading to surging profit and sales for the world’s largest retailer.

Online sales in the U.S. jumped 74 percent for its fiscal first quarter that ended April 30, which captured the brunt of the pandemic’s outbreak. Same-store sales rose 10 percent at U.S. Walmart stores on strong sales of food, health and wellness goods.

At a time when a huge swath of stores that sell non-essential merchandise temporarily shut down, Walmart has the natural advantage of carrying the very items that consumers need during a pandemic.

But unlike its online rivals like Amazon, Walmart enjoys an extensive network of nearly 5,000 physical stores and a variety of delivery and pick-up options that it ramped up to meet crushing demand for essential items, from paper towels to canned food. Walmart’s reputation for low prices also helped as the unemployment rate has spiraled to the high level since the Great Depression.

“Having a wide range of fulfillment options, including delivery to home, collection from store — and by using stores for fulfillment — allowed Walmart to ramp up capacity in a way that many other players struggled to do,” said Neil Saunders, managing director at GlobalData Retail. “We also believe that by using stores effectively, Walmart mitigated some of the higher costs associated with the online channel.”

Walmart shoppers did not limit their purchases to just essential items, using their federal stimulus checks to buy clothing, TVs and video games, which helped boost sales in April. Walmart also said it’s seeing gains in new customers from across all income brackets.

At the same time, company, which is based in Bentonville, Arkansa, had trouble keeping its shelves stocked and its inventory fell 6.1 percent. Costs soared as well, to the tune of $900 million — all of it related to the pandemic.

Cash bonuses were issued to all hourly workers and Walmart upped pay by $2 per hour at its warehouses. It rolled out an emergency leave policy and spent money on shields at checkout lines. Still, it reported a higher operating profit.

Walmart pulled its guidance for the year, citing the chaos of the pandemic. It also pulled the plug on Jet.com, an online startup that it bought for more than $3 billion in 2016 as it sought to ramp up online operations to compete with Amazon.

Before the pandemic, there was already a broadening gap between big box stores and mall-based chains that had struggled to follow customers online. The crisis has accelerated that trend, pushing clothing chains further into peril.

J. Crew, J.C. Penney, Neiman Marcus and Stage Stores have all sought Chapter 11 bankruptcy protection this month. Pier 1 Imports, Inc., which filed for Chapter 11 in February, said Tuesday that it’s winding down its business after stores are able to reopen and it can conduct liquidation sales.

The earnings picture is looking dismal for the fiscal first quarter.

Ken Perkins, president of research firm Retail Metrics, said he expects earnings will be down 36.6 percent for the 103 retailers he tracks compared to the year-ago period. Excluding Walmart, that figure would be down 45.5 percent. That would mark the worst earnings performance since at least 1998 when he started tracking the figures, and deeper that the 26.6 percent drop during the fourth quarter of 2008, the trough of the Great Recession.

Home Depot and Kohl’s on Tuesday also joined Walmart to report the full impact of COVID-19 on financial operations, and revealed the vast disparity between those allowed to keep their doors open during the outbreak, and those that were not.

Home Depot, another critical supply line for those sheltering at home and focusing on outdoor and indoor projects, reported strong sales and $850 million in additional costs related to COVID-19, mostly to compensate its workers.

Kohl’s, with it stores temporarily closed, swung to a $541 million loss and revenue tumbled more than 40 percent.

Target and Macy’s will release their financial results this week as well.

Online behemoth Amazon reported last month soaring sales in the first three months of the year, but profits slumped 29 percent because of extra costs related to the pandemic like paying workers overtime to keep up with a surge in orders and disinfecting its vast warehouses where orders are packed and shipped.