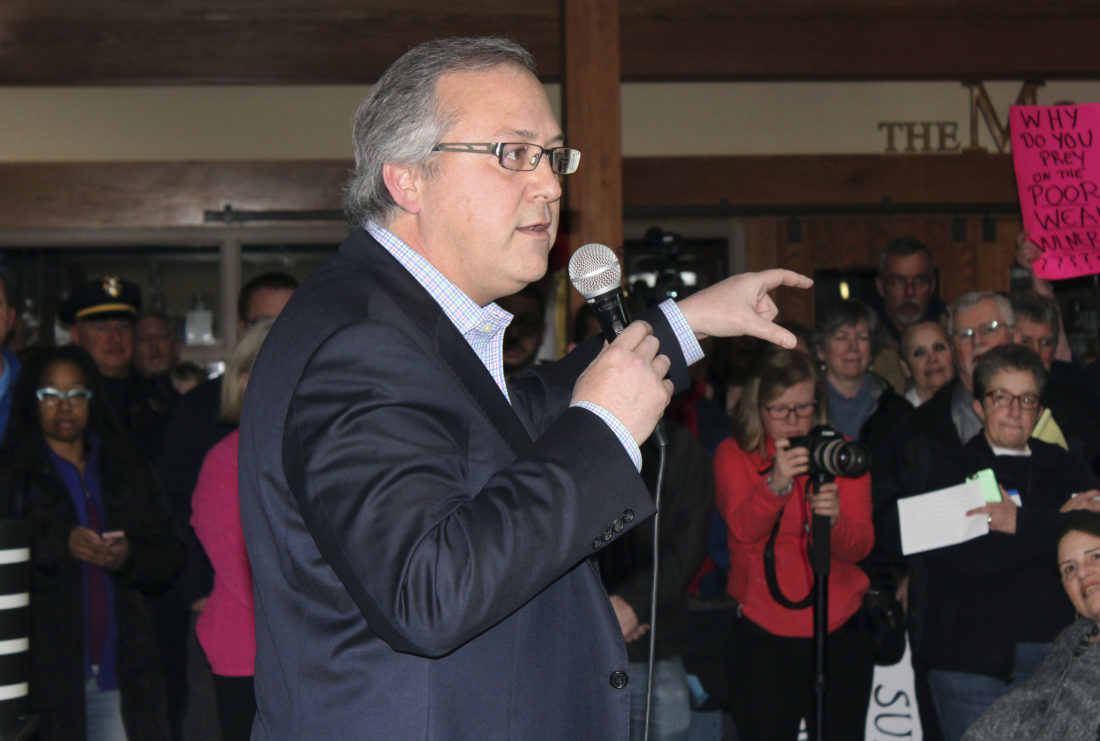 Conservatives praised Young for his opposition to the bill that would have undone much of former President Barack Obama’s health care law, casting the GOP measure as far short of a full repeal. Democrats welcomed the legislation’s demise, fearful that the measure would have been devastating to the poor.

The Republican bill would have eliminated tax penalties for people who don’t buy policies, provided tax credits that would be smaller than the law provides for many lower-earning and older recipients, and cut Medicaid, which helps poorer people afford medical care. In a major setback for the GOP last month, Ryan abruptly withdrew the bill after Trump and the House leadership failed to convince enough Republicans to back the legislation.

With Congress on a two-week break, Young faced his constituents in his competitive district and told them the bill’s drafting was its key liability. He steered clear of discussing specific provisions he opposes.

“A bad process makes a bad policy. We have to slow down. We have to air this out,” he said.

Patrick Spencer, a 54-year-old farmer from far southeast Iowa, agreed with Young. “They rushed it through. They did it in the dark,” Spencer said. “I wouldn’t be very happy if I were in his position and I’d been left out of it.”

Democrat Dale Doudna thanked Young for opposing the bill. “I appreciated your stand on the health care act,” said the 69-year-old retired teacher from a north Des Moines suburb.

Trump, Ryan and other top Republicans nevertheless maintain that they want to fulfill the promise they repeatedly made to GOP voters over seven years to repeal and replace the health care law, but agreement in the GOP remains elusive.

“We’ve not been able to get ourselves together to keep our commitment,” Senate Majority Leader Mitch McConnell, R-Ky., told reporters in Louisville on Wednesday. “I haven’t given up.”

David Roberts, a 50-year-old farmer from Sidney, told Young in the Fremont County Courthouse on Monday the Obama law has “completely failed” and “needs to be repealed completely.” Monthly insurance premiums for Roberts’ family of six have already doubled to $1,500 under the current law, he said.

“I don’t know who to fault (for the House bill failure), but they kept changing it toward the end. I was just hoping for a clean repeal,” Roberts said. “I just wish they had made it simple.”

For Young, it’s a balancing act in a politically diverse district and a presidential battleground state that Democrat Obama won in 2008 and 2012, and Trump easily captured in 2016.

Young wants to avoid angering Iowa’s older-than-average population and his district’s disproportionately low-income residents, both of whom could be hurt by the GOP bill. Thirty-seven percent of Iowa’s population is 50 years or older compared to the U.S.’s 34 percent, according to AARP.