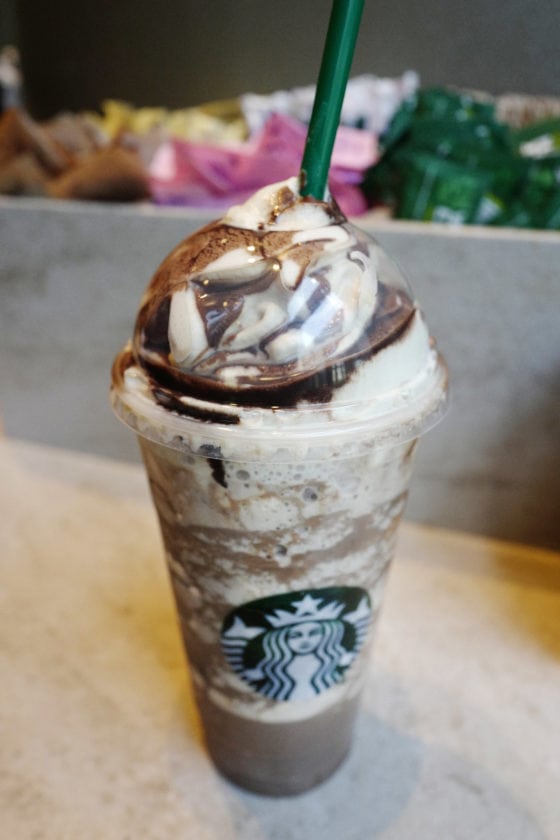 A Venti Mocha Frappuccino is displayed at a Starbucks, Wednesday, June 20, 2018, in New York. The 24 fluid ounces drink has 520 calories, according to Starbucks. Starbucks says sales for its frozen coffee drink are down, and is blaming concerns about sugar and calories. (AP Photo/Mark Lennihan)

NEW YORK — Starbucks will eliminate plastic straws from all of its locations within two years, the coffee chain announced Monday, becoming the largest food and beverage company to do so as calls for businesses and cities to cut waste grow louder.

While the straws account for a small percentage of the pollution that ends up in the ocean, they’ve become a flashpoint because they’re seen as an easy way to reduce waste.

“There are several of these single-use items the public is realizing, hey, we don’t actually need these,” said Denise Hardesty, a scientist with Australia’s Commonwealth Scientific and Industrial Research Organisation who studies plastic pollution.

A week after its hometown of Seattle banned plastic drinking straws and utensils, Starbucks said Monday that by 2020, it will use straws made from biodegradable materials such as paper and specially designed lids. The company already offers alternative straws in Seattle.

Straws often become trash because their small size makes them difficult to recycle.

Other cities, like Fort Myers Beach in Florida, have banned plastic straws, and similar proposals are being considered in New York and San Francisco. The push to ban the straws gained traction after a viral video in 2015 showed rescuers removing a straw from a sea turtle’s nose in graphic detail.

The issue of waste more broadly is coming up in company boardrooms.

In February, Dunkin’ Donuts said it would eliminate polystyrene foam cups from its stores by 2020.

McDonald’s said it would switch to paper straws in the United Kingdom and Ireland by next year and test alternatives to plastic straws in some U.S. locations. The burger chain also said this year it would use only recycled or other environmentally friendly materials for its soda cups, Happy Meal boxes and other packaging by 2025.

Plastic drinking straws make up only about 4 percent of plastic trash by number of pieces, and far less by weight. Straws add up to about 2,000 tons of the nearly 9 million tons of plastic waste that ends up in waters around the globe each year.

Other plastic items have also been targeted in recent years.

Several local governments have enacted bans and fees on plastic bags. Reusable water bottles have also gained popularity as a way to reduce use of plastic water bottles, with refilling water stations popping up on college campuses and elsewhere.

One reason big chains say it will take time to change practices may be the difficulty in securing adequate supplies. Imperial Dade, a food service and janitorial supplies distributor based in New Jersey, says it’s seen a huge spike in demand for alternative straws in recent months.

“Our biggest challenge is trying to locate alternative sources so we can satisfy the demand,” said Laura Craven, the company’s director of marketing.

Craven also said she’s starting to see more awareness about the need for exemptions for straws that bend, which people with disabilities and others may need. Starbucks says it expects an alternative it has to work in that regard.