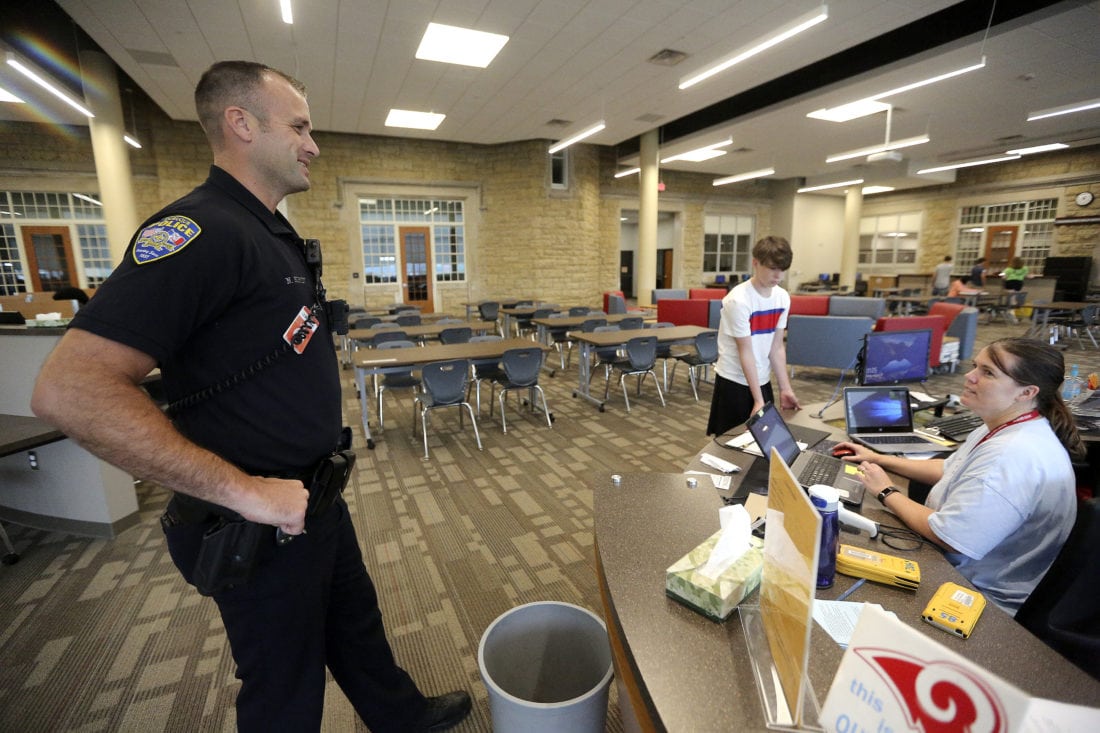 ADVANCE FOR USE SATURDAY, SEPT. 1 - In this Friday, Aug. 24, 2018 photo, Dubuque Police school resource officer Nate Schmidt stops to talk with teacher/librarian Jean Bontemps and 10th-grader Riley Jurisic as he makes the rounds at Dubuque Senior High School in Dubuque, Iowa. School-based officers in Dubuque seek to maintain a focus on curbing inappropriate behaviors before they occur. (Dave Kettering/Telegraph Herald via AP)

They help school employees handle a variety of student-related issues, such as thefts, assaults, drugs and fighting. They join school officials when they need help with an investigation and when serious behavioral issues arise.

However, school-based officers still seek to maintain a focus on curbing inappropriate behaviors before they occur. And when problems do present themselves, the age of students plays a role in how they respond.

“Your goals are different,” said Dubuque police Lt. Joe Messerich, who oversees the district SROs. “You’re still to serve and protect, but oftentimes you approach it more from a social worker’s point of view than from the point of view of a street cop that needs to make an arrest because someone broke the law.”

They also filed 225 police reports stemming from 445 incidents that year for issues such as assaults on staffers, harassment, theft, drugs and fighting. There were about 11,000 students in the district last school year.

The data cover every Dubuque district campus except for Sageville Elementary School, which is covered by the Dubuque County Sheriff’s Department. Deputy Sara Kamm, an SRO for the sheriff’s department, said five reports and no charges related to incidents in Sageville were filed last school year.

“If there’s something that has happened, it’s a case-by-case thing,” Burns said. “But generally speaking, if we’re getting them involved, there’s a certain potential that a student is going to be charged.”

Charges are much more infrequent at the elementary level. Those incidents accounted for just two SRO-filed charges last school year.