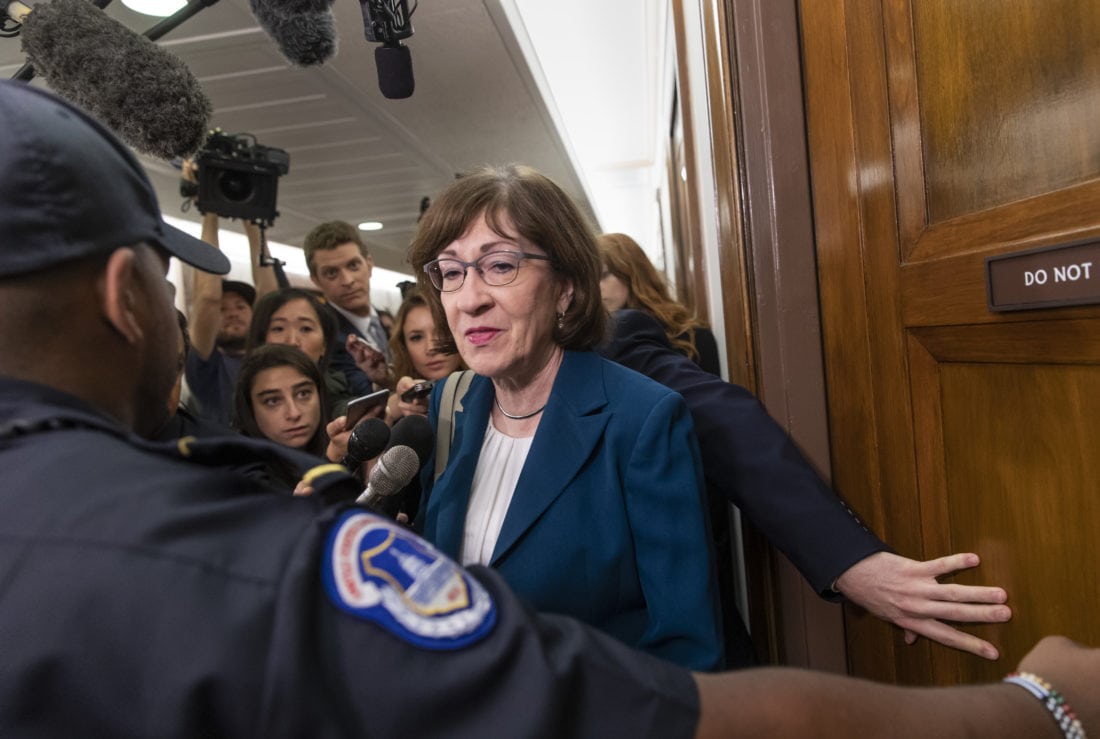 WASHINGTON (AP) — The Trump era has, at times, been uncomfortable for Republican women, especially the six senators who will be asked to vote for Brett Kavanaugh’s Supreme Court confirmation by week’s end.

Recent polls show a majority of women think the Senate should not confirm Kavanaugh. But Republican women, like GOP men, are overwhelmingly sticking with the nominee.

Here’s a look at how it’s playing out for female Republican senators:

In the Senate, the savage national debate over power and who to believe has above all been about the math. Two GOP votes against Kavanaugh’s confirmation sinks it if every Democrat votes no.

Neither has said how she will vote. Each wants to see the results of the FBI investigation.

Added Murkowski a few hours later: “I thought the president’s comments yesterday mocking Dr. Ford were wholly inappropriate and in my view unacceptable.”

Neither senator is up for re-election this year.

Two on the ballot

Sen. Cindy Hyde-Smith was rushing to a vote Wednesday when a woman shouted at her: “Do you believe survivors?”

Hyde-Smith didn’t answer. The Mississippi Republican, appointed only two months ago to a seat the GOP needs to keep, hopped on a Senate subway that sped her toward the Capitol. But she’s left no doubt where she stands on Kavanaugh. In her first speech on the Senate floor, she announced that it was her “duty” to support Kavanaugh. She made time to appear at Trump’s rally Tuesday night in Southaven, Mississippi.

Also on the ballot is Sen. Deb Fischer of Nebraska, who is campaigning for a second Senate term. Protesters shouted at her on the way in and out of a hearing Wednesday.

Fischer has said she intends to support Kavanaugh, but added, “We’re going to see what the investigation brings, and let’s get the vote.”

The two other Republican female senators say victims should be heard, but they want Kavanaugh confirmed.

West Virginia Sen. Shelley Moore Capito — like Ford, a graduate of the Holton-Arms School — has said she supports Kavanaugh.

The bad news for Republicans: Recent polls show that a majority of women do not think Kavanaugh should be confirmed. The good news: Republicans, women and men, are overwhelmingly sticking by the nominee.

A Quinnipiac University poll conducted in the days after Ford and Kavanaugh testified showed that public opinion had started to tilt against Kavanaugh, with 48 percent of voters opposed to his confirmation and 42 percent in favor. A September Quinnipiac poll found a nearly even split in opinions on the confirmation.

Women were far more likely than men in the poll to oppose Kavanaugh, 55 percent to 40 percent. But 84 percent of Republicans said Kavanaugh should be confirmed.