‘Running in their shoes’ slated for Oct. 13 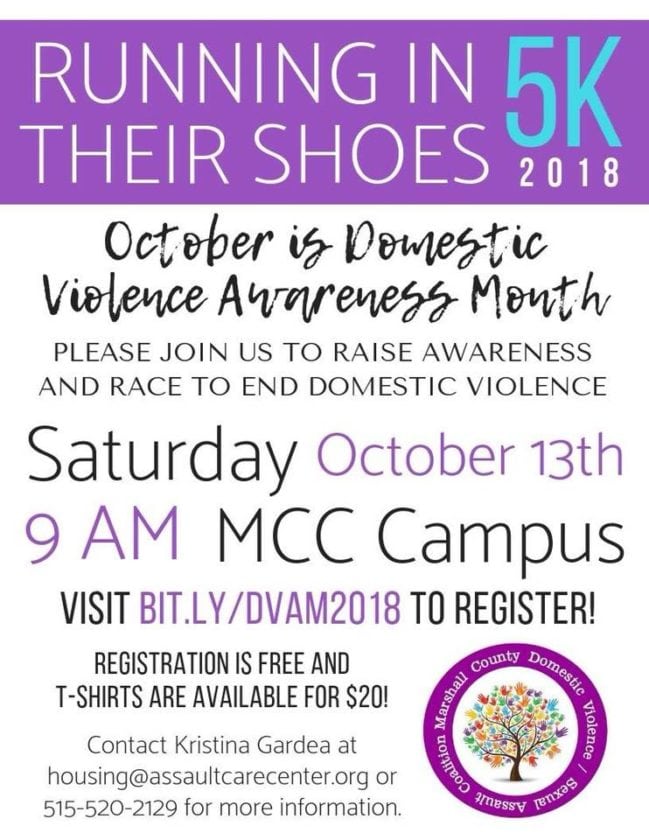 October is Domestic Violence Awareness Month and one Central Iowa organization is tackling the issue head-on sponsoring a 5K run aptly named ‘Running in Their Shoes.’

Admission is free of charge and participation is open to the public.

T-Shirts in all sizes will be sold for $20 each, Coordinator Kristina Gardea of ACCESS said.

“Please join us to raise awareness and race to end domestic violence,” she said.

One may register online by visiting BIT.LY/DVAM2018.

“ACCESS consistently provides prompt, professional, and courteous service to victims of domestic violence and abuse,” Marshalltown Chief of Police Mike Tupper said. “I urge anyone who feels strongly about domestic violence or abuse to participate, or support ACCESS with a donation.”

The organization provides assistance confidentially, and free-of-charge for residents in their service area dealing with domestic abuse, shelter, sexual abuse and violent crimes.

ACCESS’ mission is to address the roots and impact of domestic and sexual violence through services enhancing safety, empower survivors, and promote understanding and social justice within our community, according to its website.

Domestic violence crosses all class, race, lifestyle and religious lines. The only clear distinction is gender, according to the ACCESS website. Though same sex battering occurs about as often as in other couples, 95 percent of the victims of domestic violence in heterosexual couples are women battered by male partners.

For more information about the 5K contact Gardea at housing@assaultcarecenter.org or 515-520-2129.