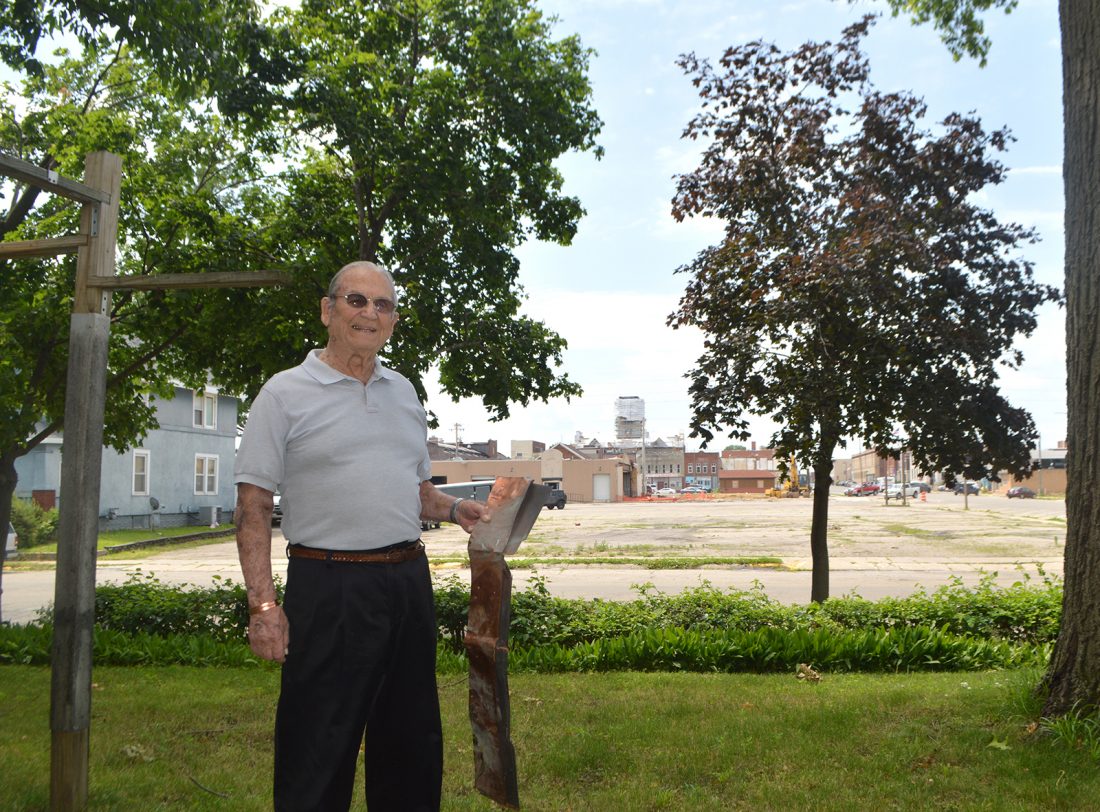 T-R PHOTO BY ADAM SODDERS – Former Marshalltown Mayor Howard Stegmann holds a piece of copper from the Marshall County Courthouse roof, visible in the background. He and his father worked with the copper in the 1930s to provide water protection for slate in the courthouse roof area.

Former Marshalltown Mayor Howard Stegmann is known by many for his career in local government – before those days, he was a teen working with his dad on the Marshall County Courthouse roof and dome.

That was back in the late 1930s, when Stegmann was about 13 years old. Now, the 93-year-old said he looks back fondly on those summers looking over Marshall County from high above the ground.

“I would sit up on the floor of the (roof) lantern and I would look around the countryside. It’s really beautiful seeing all the corn and everything,” he said.

Stegmann had two main duties as he helped his father Sylvester Michael Stegmann – a metalworker, mechanic and shop owner – work on the courthouse.

“One is holding rope for my dad over the dome … we didn’t have a crane or any of those things. We had a rope and a sling,” he said.

His other job was getting supplies up to his dad at the very top of the courthouse. No easy feat.

“He would replace slate, they were about 10 inches wide and about 18 inches long, the slate on the roof, and we didn’t have any cranes then, so I’d carry them all the way up, about five of them at a time,” Stegmann said. “They’re heavy and they’re sharp, and I’d cut my shoulder, and my old man would not feel sorry for me a bit.”

While he initially got sliced up by the sharp slate, Stegmann got ahold of a piece of leather to provide a cushion between the rock and his shoulder.

Stegmann said copper was used to protect the slate from water. A piece of slate would be slid into a folded-over piece of copper.

Most of the time, Stegmann said the pieces of slate came with nail holes pre-punctured to make the process of attaching them to the roof easier. However, sometimes he and his father had to make the holes themselves. They had a special tool with which to make such punctures.

“Unfortunately, when I learned to do that I shattered too many and my father was not too appreciative of that,” Stegmann said with a laugh.

He said he learned fast.

Many years after he worked on the historic building’s roof, Stegmann was elected first a city councilor then mayor of Marshalltown during the 1970s and 80s. He said he wasn’t able to see part of the courthouse roof ripped off in the July 19 tornado even though it was within in sight from his home, but he has high hopes for the repair process.

“I didn’t get to see the darn thing blow off. I turned my head a little bit and it was gone,”

“I didn’t get to see the darn thing blow off. I turned my head a little bit and it was gone,” he said of the dome cupola the day of the storm.

The dome was removed in May and a new dome will be constructed to replace the old one. In the meantime, a watertight temporary roof has been installed to keep rain out of the building.

“I think it’s great that they’re replacing it. That’s an heirloom, it’s an antique, it should be replaced,” Stegmann said. “I hope they try to replace it as close as they can. I hope it looks like it always did.”

Whether he was carrying sharp slate up to the roof or overlooking the sunset and cornfields of Marshall County from his high vantage point, Stegmann said it feels like the intermittent eight decades passed in a flash.

“There is a nice memory to all those summers working up there,” he said.