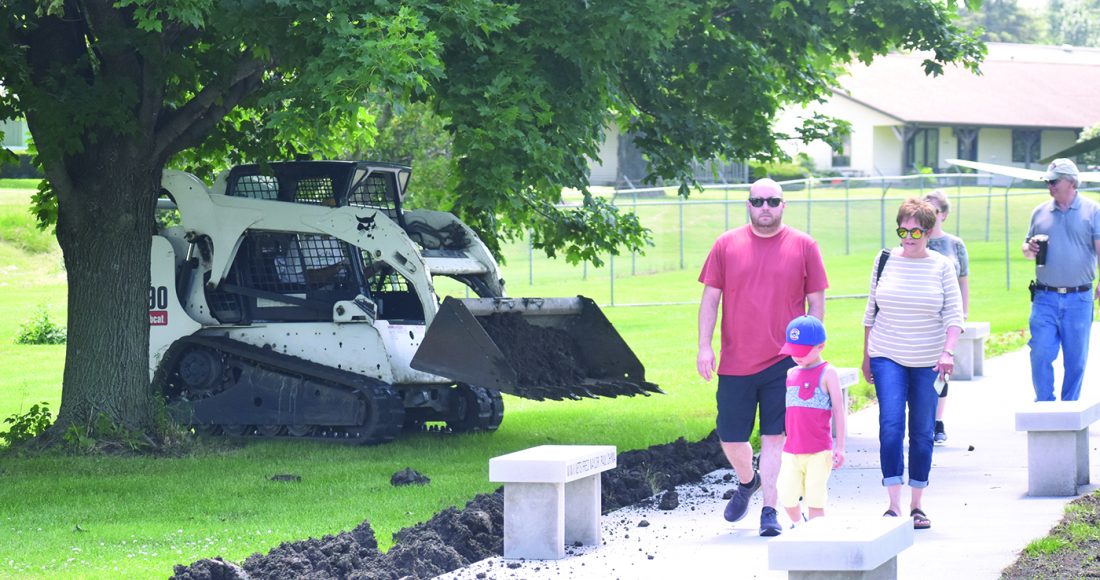 T-R FILE PHOTO
From this June 30 photo, residents walk along a recently installed sidewalk connecting a Phantom F-04 jet with the Marshall County Freedom Rock, both on the grounds of Frank Lewis Glick American Legion Post No. 46. Project coordinator Kevin Huseboe of Marshalltown is accepting orders for 20 more memorial benches of which several are shown.

The dust had hardly settled on a successful July 4 dedication ceremony celebrating the installation of a sidewalk connecting the Marshall County Freedom Rock to the F-4 Phantom Jet when project coordinator Kevin Huseboe knew there was an opportunity to do more.

A number of residents who saw distinguished memorial benches along the sidewalk asked Huseboe, of Marshalltown, if more could be installed. Yes, but only 20 can be ordered due to space limitations.

Huseboe, a U.S. Army and Vietnam veteran said all orders must be placed by Aug. 31. He and other Legionnaires invested more than two years of planning, coordination and fundraising to make the project a reality.

“We are grateful for the contributions received from the business community and individuals,” Huseboe said.

Huseboe said the need to install a sidewalk grew from many comments made by residents and visitors.

“For example, Iowa Veterans Home residents and other disabled visitors to the Freedom Rock could not take wheelchairs over the grass to the F-4 jet.”

American Legion Commander Randy Kessler said he is excited and praised Huseboe and committee for their dedication and persistence.

The Freedom Rock was dedicated July 4, 2016. Fellow veteran Ron Estabrook worked at fundraising more than two years before the project was complete. The jet was flown by local attorney Joe Latham during the Vietnam War.

A group of volunteers maintain the jet’s exterior and fencing surrounding it.