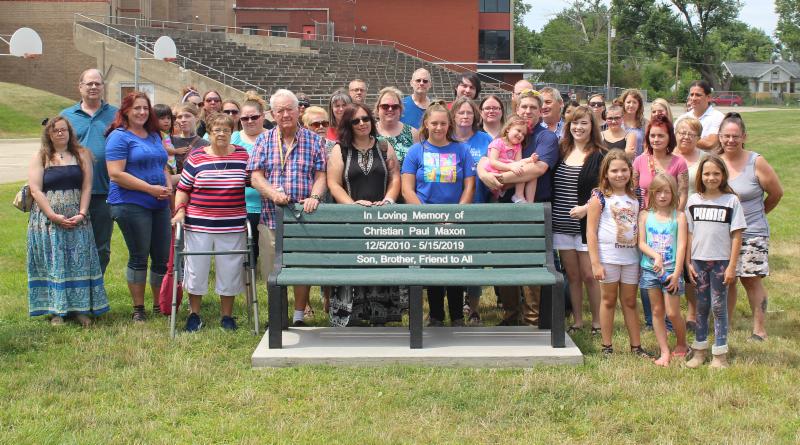 Contributed photo Family and friends of the late Christian Maxon gather for photo around the bench that was dedicated to his memory.

A large group of family, friends and Franklin Elementary School staff honored the memory of Christian Maxon during a bench dedication in his honor on August 10 at the school.

Maxon was the 8-year-old who passed away after an accident after school in May. The Marshall County Landfill donated the bench, which is made out of recycled plastic bags, and Dick’s Concrete donated the concrete base it rests on.

The bench is located just steps from the Franklin playground and is called a “buddy bench” to be used by students who are in need of a friend to play with. To name a “buddy bench” after Christian is very appropriate, according to Christian’s father, Timothy Maxon.

“Anybody that knows Christian knows that he would be the first to grab somebody (who needed a friend),” Timothy Maxon said.

Christian’s father thanked the crowd and community for its support during this trying time for the family.

“I want to extend a thank you to everybody,” he said.

Christian’s mother, Brittany, was also at the event along with dozens of other family members and friends.