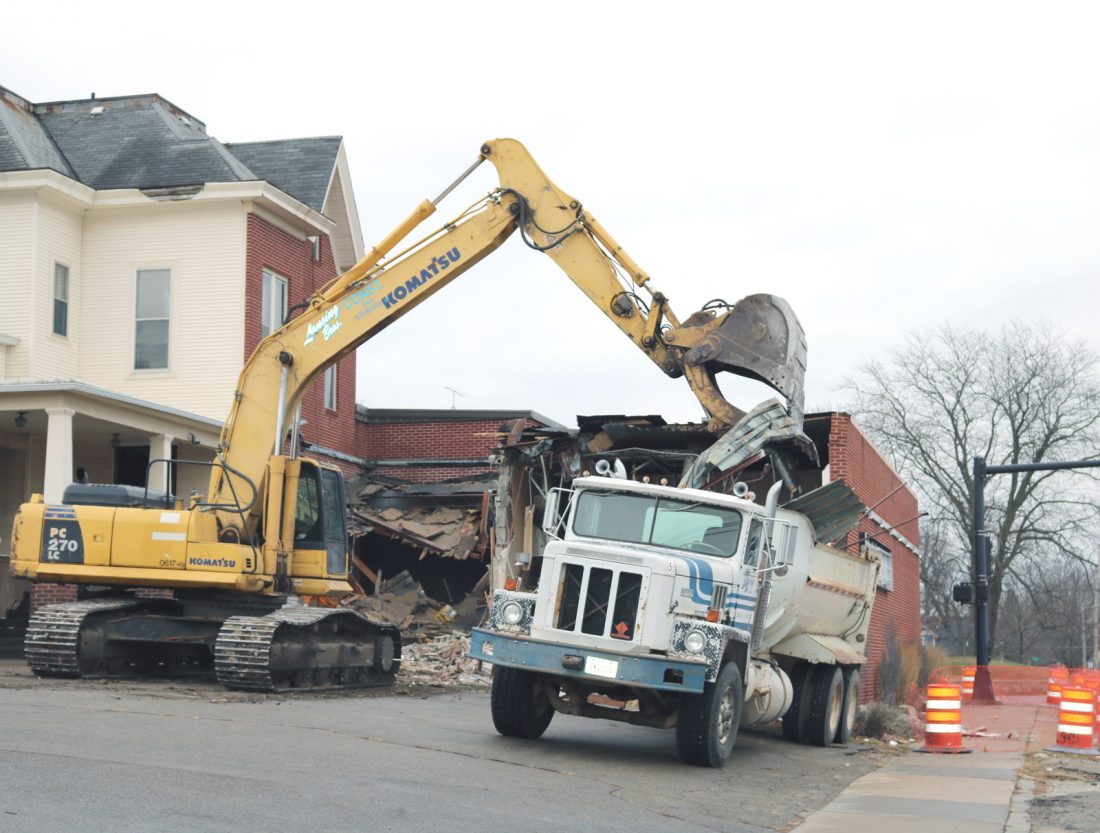 Councilors voted unanimously at Monday night’s regular council meeting in awarding a demolition contract to Lansing Brothers Construction of Luxemburg. That company submitted the lowest and most responsible bid of $138,650.

Funds for demolition will come from the city’s Dangerous and Dilapidated program created several years ago and modeled after Newton’s successful and popular program.

City Administrator Jessica Kinser said several of the nine had been extensively damaged by the July 2018 tornado while others had been on the D&D list.

The company will disconnect and seal all utilities. In addition, any basements will be filled in and lots graded and seeded.

The company was previously awarded a contract earlier this year by council to demolish 20 E. State St., the former Senior Citizen Center.

Councilors also approved a contract with Caliber Concrete for the Anson Park project in the amount of $175,911.95. Parks and Recreation Director Geoff Hubbard told the council his department is comfortable with the contractor’s bid and timeframe.

The project had been started last year by Iowa Valley Community College’s Leadership Class. In addition to concrete, new playground equipment accessible to handicap residents will be installed among other features.

• Councilors voted unanimously to approve the hiring of a full-time city planner. Housing and Community Development Director Michelle Spohnheimer said salary and benefit package would be $80,200. Spohnheimer told councilors the position had been vacant for approximately four and one-half years due to budget concerns. However, she said it was important the position be filled because of extra duties thrust upon the department since the tornado and related factors. Spohnheimer and Kinser said the position would be paid for by a combination of federally-funded Lead Abatement Program and Local Option Sales Tax funds for the remainder of the current fiscal year which expires June 30, 2020.

Councilors compliment Spohnheimer and staff for amount of work accomplished since tornado despite being short-staffed.

• Resident Gary Thompson asked the council’s help in convincing Alliant Energy to repair non-working street lights damaged in the July 2018 tornado. Thompson said in the city hall neighborhood he recently counted six lights out. On July 29, two downtown businesses – Odds & Ends and Wax Static Record Auto Stereo store in the 100 block of West Main – were the victims of a break-in. Business owners said they had complained to the city several times about the dark back alley behind the store, which they believed made it easier for thieves to escape detection as they worked to gain entry to a heavily secured door.

“We have had no streetlights back there since lights were knocked out by the July 2018 tornado,” he said. “Downtown is dark. I walked people home from Fiddle & Whistle the other night … I walked them to their cars because it is so dark.”

It’s unclear whether fixing those lights is the responsibility of Alliant or the city.

The next meeting of the council is 5:30 p.m. Aug. 26 in council chambers, 10 W. State St. Visit the city’s website for the meeting’s complete agenda packet and to subscribe to agenda notices and department news at marshalltown-ia.gov.