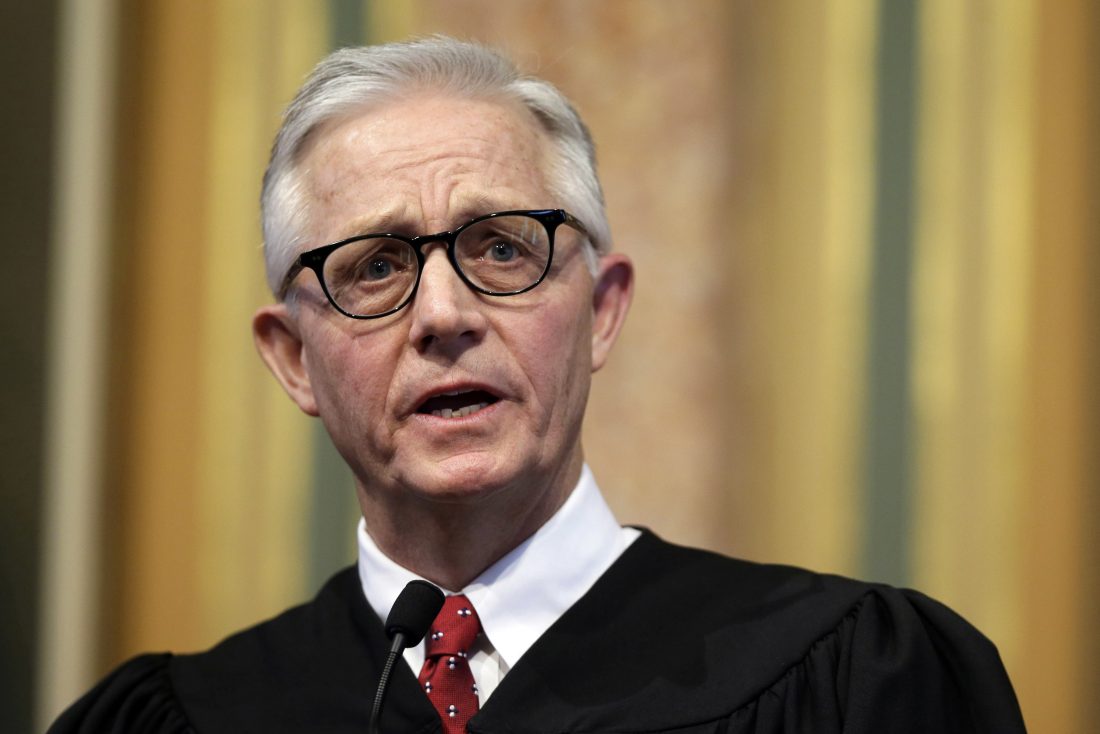 DES MOINES — Mark Cady, the soft-spoken chief justice of the Iowa Supreme Court who wrote key decisions on gay marriage and abortion access that rankled social conservatives, has died at the age of 66.

Cady died unexpectedly Friday night from a heart attack, his family said in a statement posted on the court’s website.

In an accompanying post, the court described him as an exceptional judge who was respected and beloved by his fellow jurists.

“His passing is a great loss to the court and the state he so loyally served,” the court wrote.

A court spokesman, Steve Davis, said Cady was in Des Moines when he died.

Cady had been a key swing vote on the court in recent years, as Republicans took control of the Legislature and governor’s office and passed new laws aimed at expanding gun rights, restricting abortion and barring gay marriage.

Cady wrote the 2009 unanimous opinion that made Iowa the nation’s third state to permit same-sex marriage. The ruling came years before the 2015 U.S. Supreme Court decision that struck down gay marriage bans throughout the country.

“We are firmly convinced the exclusion of gay and lesbian people from the institution of civil marriage does not substantially further any important governmental objective,” Cady wrote for the court.

The ruling led to a backlash from conservatives, who voted out three of the justices in 2010, though Cady wasn’t up for a retention vote that year.

Last year, Cady led a 5-2 majority of justices who concluded that a law requiring women to wait 72 hours before a doctor could perform an abortion was unconstitutional because “autonomy and dominion over one’s body go to the very heart of what it means to be free.”

The ruling angered conservatives and led to passage of a law this year that gave the governor more control over nominees to put on the courts. The law also reduced Cady’s eight-year term as chief justice by three years, forcing him to step down as chief in 2021, which would have cut his pay by about $8,000 a year.

A legal challenge to the law will be heard by the Iowa Court of Appeals.

Cady sided with the majority in a 4-3 decision three years ago that barred sentences of life without parole for teenagers, finding it cruel and unusual punishment. And he worked to limit a 2017 law that allowed guns to be carried in courthouses throughout the state. After issuing an order banning guns from courthouses, he compromised with a revised order allowing county supervisors or other local government officials to file written requests to allow guns in their buildings.

Gov. Kim Reynolds ordered on Saturday all flags in Iowa to be lowered to half-staff and to remain that way until a memorial service is held. She said she was heartbroken to learn of his death.

“He loved the law, the judiciary, and the state we call home. He leaves behind a legacy of service and dedication that we should never forget,” she said.

Governor for just over two years, Reynolds, a Republican, already has appointed two justices — one due to illness and another retirement — and now will fill another vacancy.

Although Cady was one of five Republican appointees to the court, he often sided with the two justices appointed by Democratic governors.

Cady, of Ft. Dodge, was appointed to the Iowa Supreme Court in 1998 by Republican Gov. Terry Branstad. The members of the court selected him as chief justice in 2011.

Branstad, now U.S. ambassador to China, said in a statement that accompanied Reynolds’ that he was proud to have appointed Cady to the district court, appeals court and state Supreme Court.

“He was a dedicated jurist who was liked and respected for his strong work ethic and fairness,” Branstad wrote.

He was chairman of the National Center for State Courts Board of Directors and served as president of the Conference of Chief Justices.

Cady is survived by his wife, Becky, two children and four grandchildren.