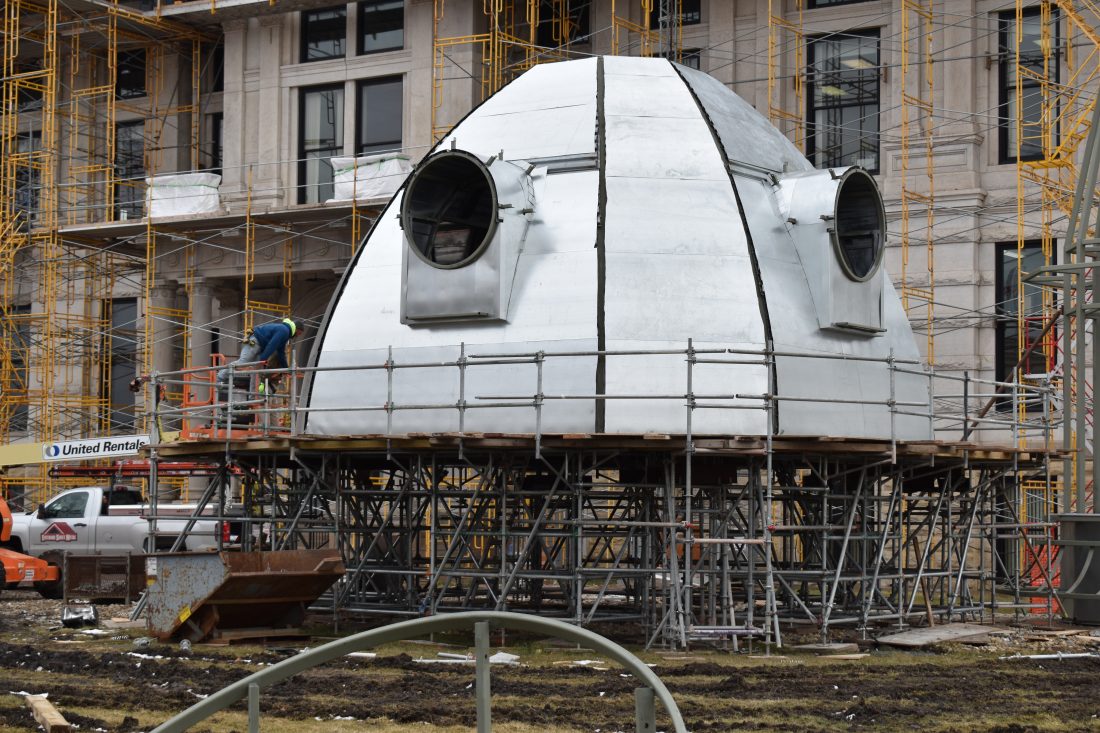 T-R PHOTO BY LANA BRADSTREAM Construction workers on Thursday prepare the Marshall County Courthouse dome for application of a water proofing coating, which will turn the dome black. Some workmanship issues has delayed the placement of the dome on top of the courthouse, but the hope is to get it placed in 2019.

The dome of the Marshall County Courthouse is still sitting on the front lawn waiting to be placed at the apex of the building.

Buildings and grounds director Lucas Baedke said the initial plan was to get the feature placed before the end of November. However, some setbacks prevented that.

“Some rework had to be done that we did not expect,” he said.

Some of the metal was of a thinner gauge than was necessary. That metal had to be welded to heavier gauge metal and Baedke said the thinner metal was burned right through.

“There was an issue with workmanship so the subcontractor had to redo it,” he said.

Baedke is hoping to get the dome placed before Christmas but knows that might not happen. However, he is being optimistic. If Christmas does not happen, another hope is getting it placed before 2020. Baedke said that is more likely but it is still difficult to determine.

One way for the public to keep an eye as to when the dome will be placed is to pay attention to its color.

“When you start to see it turn a different color there will be a lot of progress,” Baedke said.

The color change will be attributed to the water proofing coating to be added to the dome. Baedke said it is a liquid, rubberized substance that sets up quickly in the cold temperatures, so large batches cannot be mixed. When the substance sets it will be black.

“When that happens we will be a lot closer,” he said.

While progress happens on the exterior or the courthouse not much is happening on the interior.

Baedke said almost everything is at a standstill at this point because workers are waiting for discussions on layouts with the insurance company to finish. After everything is approved, there might be even more waiting. The architects working on the courthouse had other projects to work on while caught in the waiting game.

“It will probably be after the first of the year when something is happening inside,” Baedke said.

Despite the setbacks and the waits, he said everyone is still optimistic. Construction projects are always difficult to work on and accomplish during the winter months.

Fortunately, the people of Marshalltown have shown great patience with the process.

“I think everybody understands there is a lot going on here,” Baedke said. “The hard part is getting solid dates. There needs to be some fluidity on that as there are too many variables to consider.”