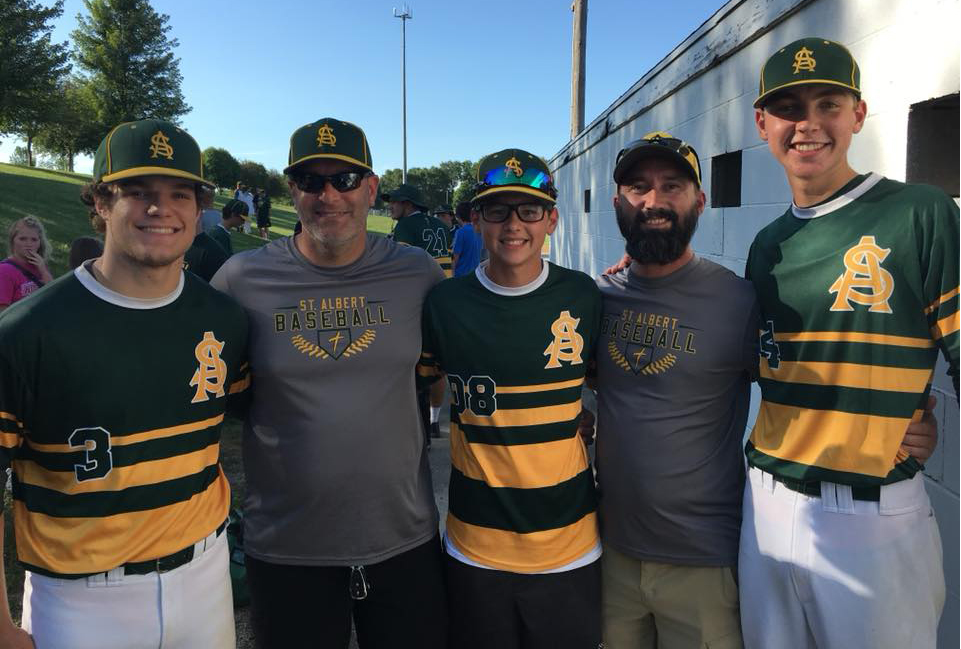 CONTRIBUTED PHOTO Marshalltown Parks and Recreation director Geoff Hubbard has actively participated in a variety of sports including softball and volleyball in Marshalltown, Council Bluffs and Sioux City. Here, Hubbard is pictured recently with softball teammates.

Marshalltown Parks and Recreation director Geoff Hubbard could not contain his excitement talking about his first year on the job.

Hubbard, a Marshalltown native and 1989 Marshalltown High School graduate, said accepting the position was one of the best decisions he ever made.

“I am excited to be back in my hometown,” he said. “This year has flown by. It has been a tremendous year.”

He thanked the ‘fantastic’ Parks and Recreation staff, city department heads and city council for making him feel welcome and supportive of his ideas.

“I was thrilled at a December city council meeting when the council approved an $8-million dollar general obligation bond issue, of which $1.2 million was reserved for three parks and recreation department project,” he said. “In my 20 years in parks and recreation, I had never seen this amount of projects funded at one time.”

“She has been a great resource to guide me in the right direction,” he said. “She has been excited about, and supportive of projects.”

In the last month, contractors were busy with demolition work – removing the chimney and other items from the historic structure.

The VMC was extensively damaged from the July 2018 tornado.

Fortunately, insurance is allowing the city to not only repair tornado damage, but make other badly needed renovations identified by a committee made up of city staff, parks and recreation staff, veterans and local residents.

That study was completed before the tornado.

Improvements include making the mammoth facility Americans with Disability Act compliant, and installing two basketball and three volley-ball courts among other items.

Also leveraged as part of project financing improvements is nearly $1.35 million in grants and donations garnered from an aggressive fund-raising campaign.

“We are only $24,000 short of the $1.35 million goal, Hubbard said. “The estimated completion date is October. It would be great if we can have a grand re-opening yet this year. And I know our recreation supervisor Jenny Hart would like to move her programs back into the Coliseum instead of holding them at various venues around town.”

Third ward city councilor Mike Gowdy, who was on the selection committee which hired Hubbard, said he is pleased with his work.

“Geoff hit the ground running,” Gowdy said. “I have worked with him on the Coliseum fund-raising committee too, and he has generated a lot of income for the renovations. I am looking forward to working with Geoff and his staff on the parks and recreation strategic plan.”

“I have been impressed with Geoff’s work on the Coliseum,” he said. “That facility means a lot to me as a veteran and it holds high-school related memories too. Geoff is an aggressive fundraiser.”