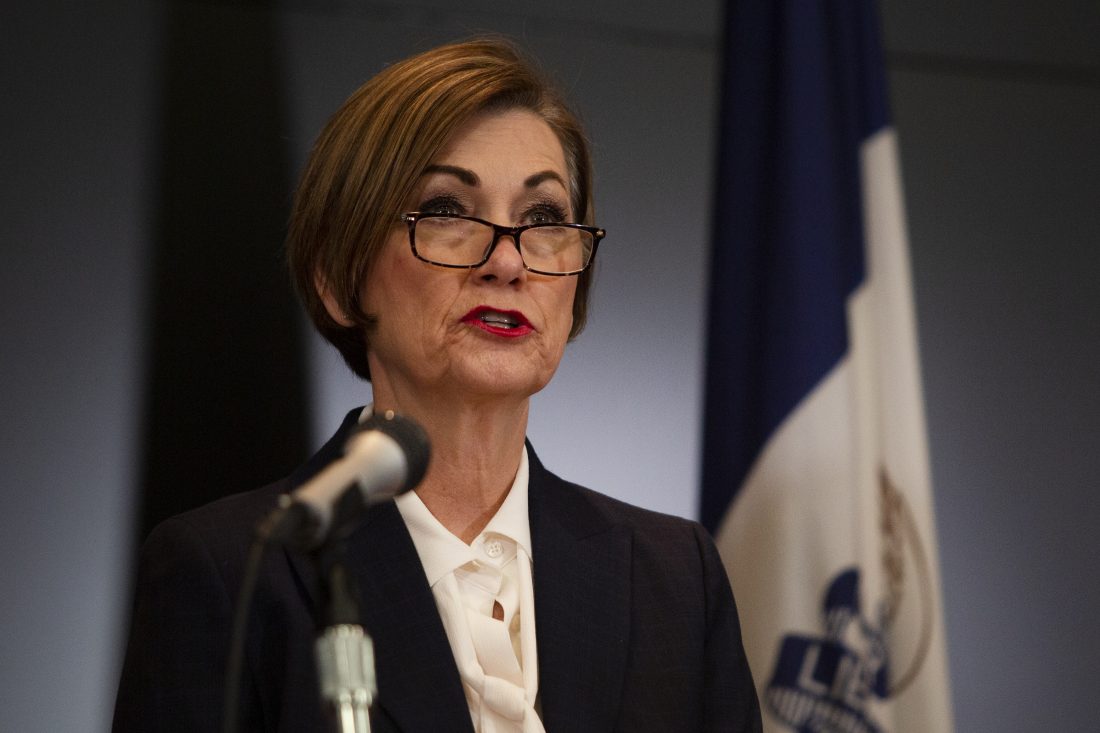 IOWA CITY — Gov. Kim Reynolds on Monday expanded business closures to include malls, bowling alleys and playgrounds and instructed police to enforce her order prohibiting gatherings of more than 10 people as the coronavirus pandemic intensified across the state.

Outbreaks of the virus were confirmed at two more Iowa nursing homes, a major meat processing plant was temporarily closed after scores of workers were infected, and a beloved Iowa City educator was confirmed to be among the dead.

Iowa Department of Public Safety Commissioner Stephan Bayens said the governor was issuing guidance this week to police officers to enforce her orders limiting non-essential public gatherings. He said violators would first be educated and warned — but could also be charged with simple misdemeanors for non-compliance.

“Law enforcement has no desire to cite or arrest anyone. Most Iowans are being responsible and doing their part. It is only a small segment that is throwing caution to the wind and ignoring the limitations on social gatherings,” he said.

The more aggressive moves come after Reynolds faced intense criticism in recent days for refusing to order a statewide stay-at-home order and as the number of cases in Iowa continues to grow.

Tyson Foods suspended operations at its pork plant in Columbus Junction after more than two dozen workers tested positive for the virus. A spokesman said the plant, which employs 1,400 workers, would stay closed this week before revisiting its status.

Twelve of the state’s 25 coronavirus deaths have been linked to outbreaks at three long-term care facilities, state officials said. Overall, 10% of the 946 state residents who have tested positive for COVID-19 have been either residents or staff at those facilities.

The outbreak at Heritage Specialty Care in Cedar Rapids has grown to 71 cases, or nearly one-third of the roughly 225 residents and employees there.

Reynolds said the other care facilities with outbreaks were in Washington and Tama counties, rural areas that have seen rising cases and deaths in recent days. Public health officials didn’t identify those facilities, citing privacy concerns.

In Washington County, public health director Danielle Pettit-Majewski said some infected patients have been transferred out of the affected nursing home. She said most, though, have simply been isolated in individual rooms away from others.

Hospitals are caring for 99 people confirmed to have the virus in the state.

Among those dead from COVID-19 is John DeMarco, 73, a longtime physical education teacher and coach at Iowa City Regina, a Catholic high school. The school said that DeMarco, who had been a fixture at Regina since 1981, died Saturday.

Regina senior Rowen Udell said DeMarco was a fun gym teacher who gave students nicknames and was “always good at making everyone smile.”

DeMarco is survived by his wife Diane, the former University of Iowa gymnastics coach.