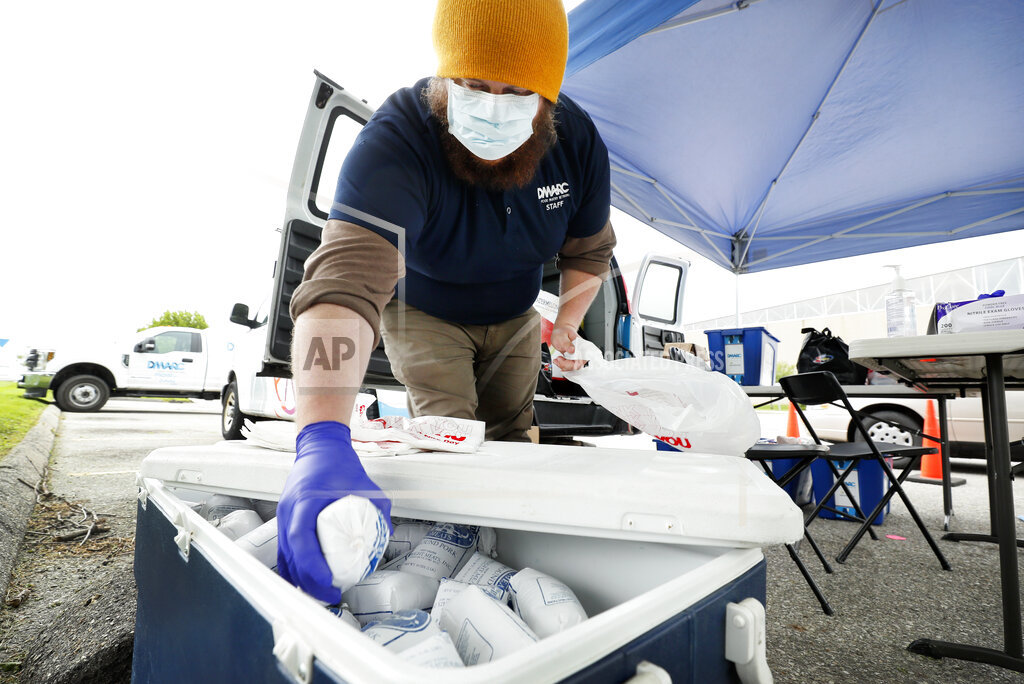 Des Moines Area Religious Council Food Pantry worker Patrick Minor pulls a package of ground pork out of a cooler during a pantry stop, Wednesday, May 20, 2020, in Des Moines, Iowa. As food banks have struggled to meet soaring demand from people suddenly out of work because of the coronavirus outbreak, it has been especially troubling to see farmers have to bury produce, dump milk and euthanize hogs. Now some states are spending more money to help pay for food that might otherwise go to waste, the U.S. Agriculture Department is spending $3 billion to help get farm products to food banks, and U.S. senator is seeking $8 billion more to buy farm produce for food banks. (AP Photo/Charlie Neibergall)

OMAHA, Neb. (AP) — As food banks have struggled to meet soaring demand from people suddenly out of work because of the coronavirus pandemic, it has been especially troubling to see farmers have to bury produce, dump milk and euthanize hogs.

Now some states are providing more money to help pay for food that might otherwise go to waste, the U.S. Agriculture Department is spending $3 billion to help get farm products to food banks, and a senator is seeking $8 billion more to buy farm produce for food banks.

“Obviously nobody likes to see waste of good food,” said Mark Quandt, executive director of the Regional Food Bank of Northeastern New York. “And to know that farmers put so much work and money and energy into producing the product. That’s got to be breaking their heart to then have to just dump product like that or just throw it away or plow it under.”

Farmers were left with little choice after the closure of restaurants and schools abruptly ended much of the demand for the food they produced.

Thousands of acres of Florida fruits and vegetables and California’s leafy greens have been plowed over or left to rot. Meanwhile, dairy farmers in Vermont, New York and Wisconsin have had to dump millions of gallons of milk. Hog farmers were hit by a drop in demand and the temporary closure of some slaughterhouses, forcing them to euthanize pigs that couldn’t be processed into bacon and pork chops.

This has coincided with a spike in demand at food banks, with nearly 39 million people suddenly out of work. In Florida, for example, 12 food banks have had to scramble to increase deliveries from 6 million pounds of food per week to 10 million pounds.

A U.S. Census Bureau survey found that more than 10% of U.S. households reported not being able to get enough food some of the time or often, and a survey for the Data Foundation found that 37% of unemployed Americans ran out of food in the past month.

Thanks to various government and private efforts, at least some of the food that would have been wasted is now being delivered to the people who need it.

New York state created a $25 million program this spring so that food banks can purchase locally made agricultural products. Quandt said he is already planning to use the $4.3 million his food bank will receive to buy milk, cheese, yogurt, applesauce, grape juice and other products.

“It will be a tremendous help,” he said.

Chris Noble, who has a dairy farm about 30 miles (50 kilometers) south of Rochester, said the Nourish New York program gave him an outlet for some of the milk his coop was dumping and provided money to cover his costs. He worked with other farmers in western New York to send dairy products to a food bank in New York City.

“It doesn’t feel good to see our life’s work go down the drain like that,” said Noble. “To be able to meet the needs of our community with the food we produce and not see it go to waste is really impactful.”

In Iowa, state officials and the Iowa Pork Producers Association have raised more than $130,000 to help pay for the processing of pigs to supply meat for food banks. The effort gives hog farmers such as Kevin Rasmussen an outlet so they won’t have to euthanize their animals but it doesn’t compensate them. So far, 364 pigs have been donated.

“The last thing we want to do is waste anything,” said Rasmussen, who donated seven pigs from his northern Iowa farm to the program this month. “Everybody is doing everything they can to keep from euthanizing animals and throwing product away.”

Other states, such as Florida and California, had existing programs to help get donated crops to food banks by paying part of the cost of harvesting them. Those programs are getting a boost from donations now and California is adding $2 million to its state budget for its program.

The biggest effort is a $3 billion federal program aimed at buying fresh produce, dairy and meat and delivering it to food banks. That program has been slowed by questions about some of the companies that received the initial $1.2 billion contracts.

“Some of the companies that got bids, people are kind of scratching their heads like ‘wait this isn’t a food distributor, why are they winning the award?'” said Celia Cole, of the Feeding Texas association of food banks.

One of the companies that has received the most scrutiny is a San Antonio wedding and event planning company called CRE8AD8 that received one of the biggest contracts, worth roughly $39 million. Several large, well-known food distribution companies were passed over in the bidding in favor of smaller companies.

Brent Erenwert, CEO of Brothers Produce, a Houston-based produce distributor that applied but didn’t get a contract, said he is concerned the USDA program will fall short of its goals because of the companies awarded contracts.

“We’ve got a fiasco on our hands right here,” Erenwert said. “There’s just no way or shape this will help the farmer or the end user that’s going to need this product.”

USDA officials said they are confident the selected companies can complete the job.

Separately, Sen. Kirsten Gillibrand of New York has proposed spending $8 billion on fresh produce grown in 20 states and providing the crops to food banks. That proposal would provide money to food banks to purchase fruits, vegetables and nuts directly from farmers.