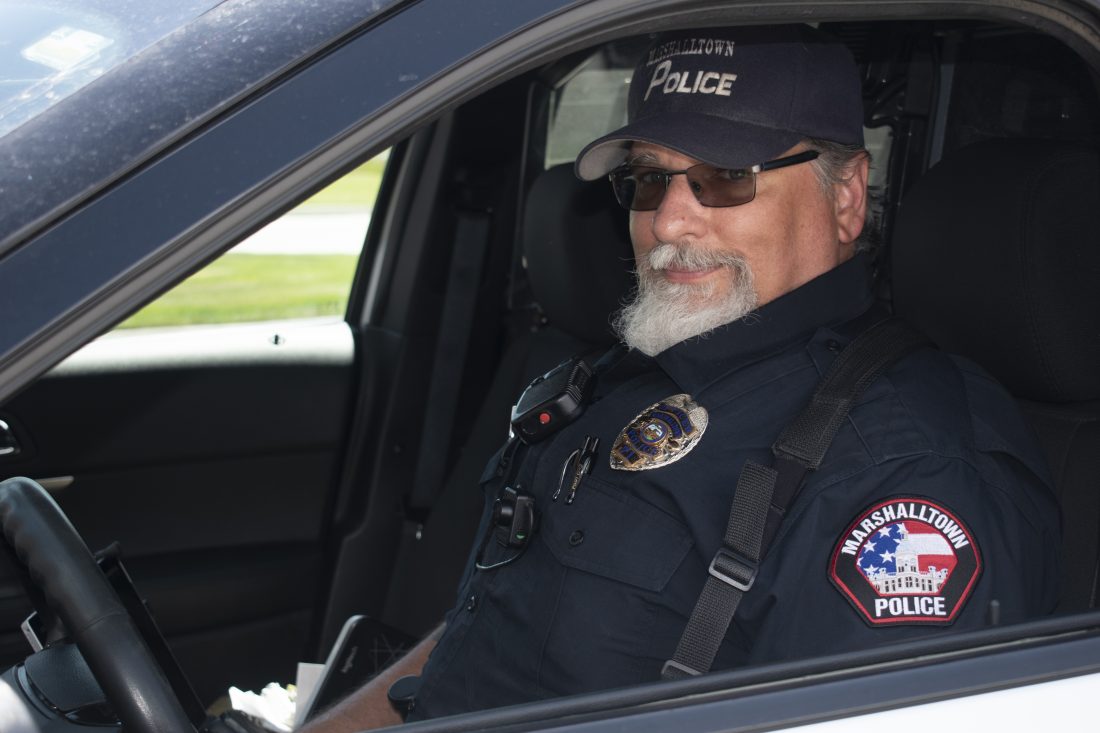 T-R PHOTOS BY LANA BRADSTREAM — Marshalltown Police Department officer Randy Kessler’s last day on the job was Thursday. He retired after more than 31 years on the job.

After more than 31 years on the job, Kessler, 55, decided it was time to retire.

“It is time to go,” he said. “Maybe I will get a part-time job. I will get weekends and holidays off and I won’t have to work late.”

Kessler does not have any immediate plans for his retirement other than doing a lot of camping with his wife, Karen.

They have a son, Jake, 23, who is a police officer in Tama. However, Kessler was the one who started the law enforcement path in the family. 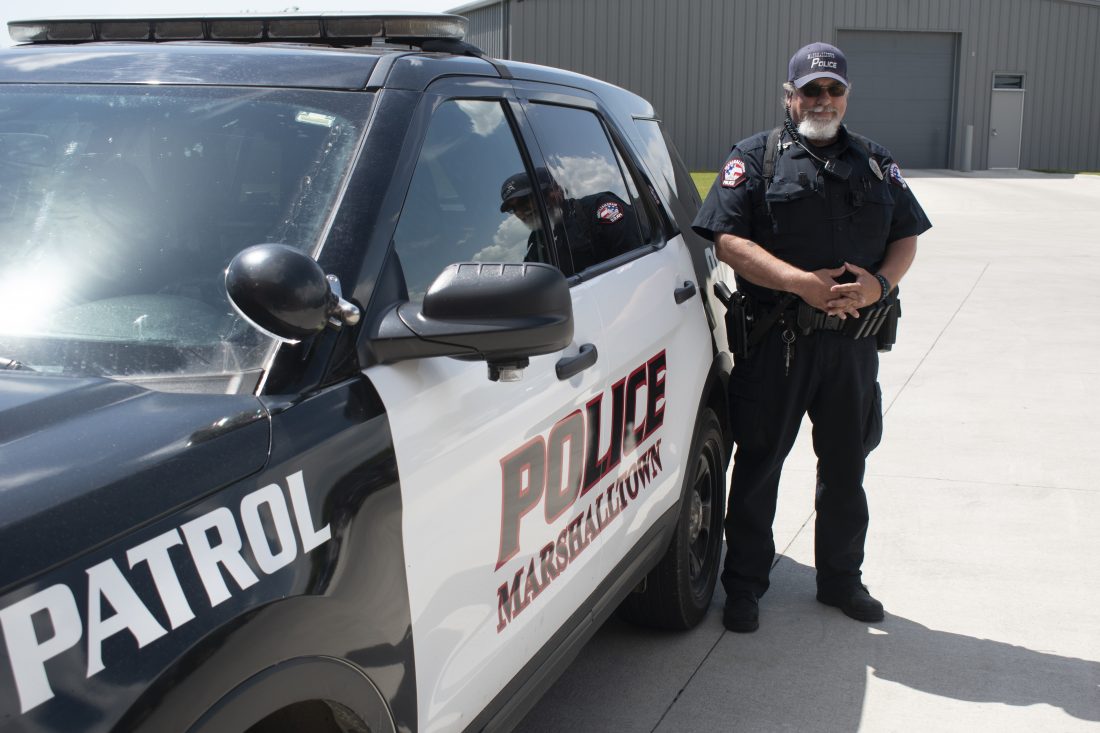 T-R PHOTOS BY LANA BRADSTREAM Officer Randy Kessler next to his patrol vehicle.

When he was a senior in high school in Iowa City, he joined the Air Force and wanted to serve as a member of the military police. Kessler was active in the military branch for four years and was stationed in the United States and Europe. While stationed in Florida, he rode with some auxiliary police and decided then and there that he wanted to make law enforcement his chosen career. Kessler returned to Iowa and got his first law enforcement job in Marion, which is where he met his wife. The couple moved to Marshalltown not long after where Kessler had a varied career.

One of his best memories was serving as a K-9 officer. He was able to travel all over the country for the United States Police Canine Association.

“I was a national officer in that and a judge,” Kessler said. “I love it. I got to meet people from all over the country and it was a lot of fun. I got to work with a lot of good dogs.”

His work with police canines was so impactful Kessler helped write an Iowa law to get protection for the dogs.

“There was no law protecting K9s at all,” Kessler said. “I got a hold of some state legislators and we reworked an Iowa law which increased penalties.” 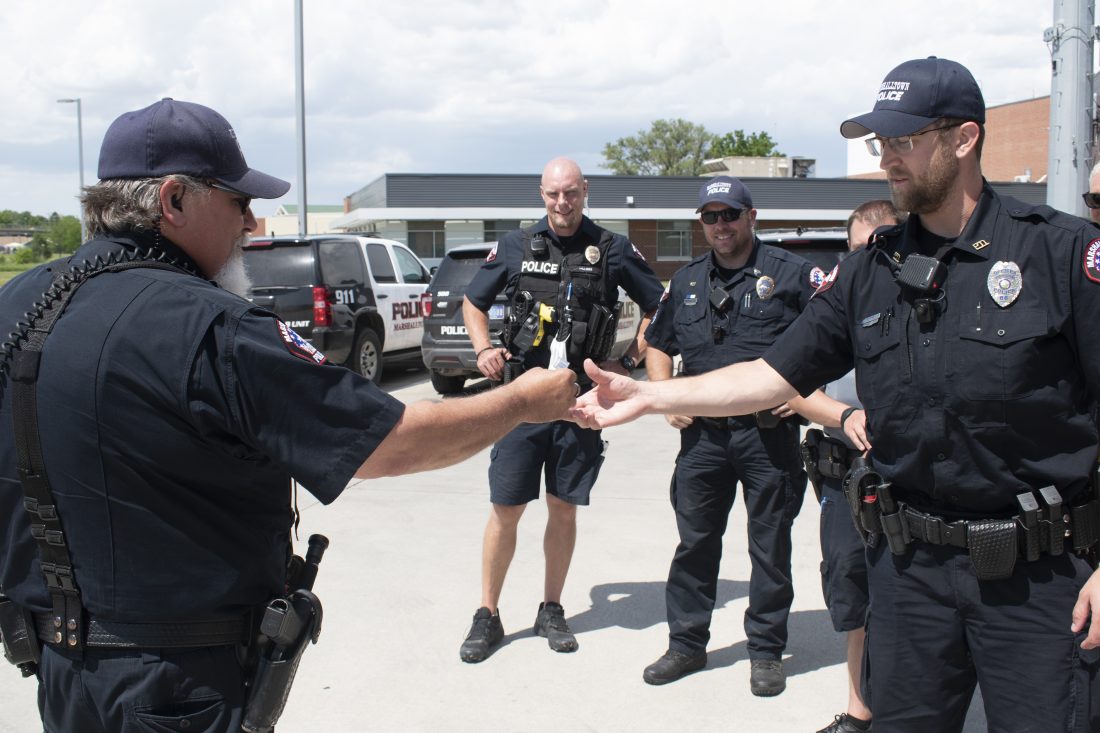 Marshalltown Police Department officers who share a shift with Randy Kessler give him a token on his last day of work on Thursday before his retirement.

One of the biggest challenge Kessler faced was as a detective on the Iowa Internet Crimes Against Children team. He was required him to learn a lot about computers — something he was not fully accustomed to.

Even though the computer proved to be Kessler’s biggest challenge, what he was able to accomplish was very fulfilling.

One case in particular stood out to him. Someone with a mentoring agency in Des Moines managed to work himself into a family with three children and he abused them all.

The excitement of the job is what he will miss the most.

“A lot of police work is boring – you drive around and respond to calls,” Kessler said. “But then something really exciting happens. I will miss that and miss working with the guys I work with. There are fantastic officers on my shift. They are some of the best. I will miss them a lot.”

Chief Mike Tupper said Kessler will be missed, as well. The three words he would use to describe Kessler are, “Experienced. Respect. Dependable.”

Tupper has worked with Kessler during the last nine years and hates to see him leave but is excited that Kessler gets to start a new chapter of his life.

T-R PHOTOS BY LANA BRADSTREAM Officer Randy Kessler next to his patrol vehicle.

Marshalltown Police Department officers who share a shift with Randy Kessler give him a token on his last day of work on Thursday before his retirement.

T-R PHOTOS BY LANA BRADSTREAM — Marshalltown Police Department officer Randy Kessler’s last day on the job was Thursday. He retired after more than 31 years on the job.