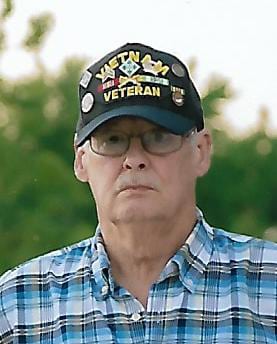 Edward Arthur Mills, 70, of Marshalltown, passed away on Wednesday, July 25, 2018, at Iowa Methodist Hospital of a ruptured aneurysm.

Memorial services for Ed will be held on Tuesday, July 31, 2018, at 9:30 a.m. at the Mitchell Family Funeral Home in Marshalltown. Immediately following the service, there will be a luncheon and then all are invited (family understands if you are unable to make it ) to go to the Iowa Veterans Cemetery in Van Meter at 2:00 p.m. for the interment and military rites. Public visitation will be on Monday, July 30, 2018, from 5:00 p.m. until 7:00 p.m. also at the funeral home. For more information or to send a condolence, please visit www.mitchellfh.com or call 641-844-1234. Mitchell Family Funeral Home is caring for Ed and his family.

Edward Mills was born on November 12, 1947, in Grundy Center, Iowa, to Art and Carrie Mills. He was a graduate of the Grundy Center High School Class of 1966. Ed was employed for many years at Swifts as well as had jobs for Grundy County, Schwan’s Ice Cream as a warehouse manager and at Aspro and Handy. On May 1, 1977, Ed was united in marriage to Linda Lubbert. Ed proudly served his country in the United States Army from 1967 until 1969 during Vietnam. He was very proud to be a Vietnam Veteran and wore his shirts and hat proudly. Unfortunately, Ed suffered from Agent Orange which gave him several problems. Ed enjoyed fishing and bowling when he was able. He also loved to go to the casino, if for nothing else to just visit with the people, and had also worked a couple of years in the valet. He knew no stranger. Ed also enjoyed his dogs, drinking his coffee and going to stock car races every Friday night unless he was sick. He spoke about his grandkids all of the time and was always ready to go visit them. He had plans to go to Virginia to spend Christmas with them this year and that is all that he could talk about. Ed also had two very special neighbor kids; Jordan and Pepper that would come over to see him and he thought so much of them.

Ed is survived by his wife of 41 years, Linda; his daughter, Heather (Jim) Dickey, of Virginia and grandchildren: Austin Dickey, of Virginia and Taylor Dickey, of Ohio. He is also survived by his sister, Sandra (Ed) Morrison, of Marshalltown and his nephews Mike and Yvonne Morrison and their family from Colorado Springs and Don and Shannon Morrison and their family, of Marshalltown, along with many other family and special friends Jack, Arlene, Rick and Vicki that he enjoyed going out to eat and do things with.

Ed is preceded in death by his parents, Art and Carrie.