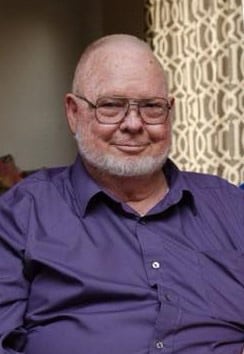 The honored and faithful soul of Larry Dale Campbell, 80, of rural Beaman, left this earthly life on the afternoon of Wednesday, July 25th, in the peace of his home with family at his side.

Funeral services will be at 10:00 a.m. Saturday, August 4th, at the Mitchell Family Funeral Home in Marshalltown, Iowa. Visitation will be from 5-7:00 p.m. Friday at the funeral home. Memorials may be directed to the Family to be designated at a later date. Military Honors will be provided by the United States Air Force Honor Guard. For condolences or questions please visit: www.mitchellfh.com or call 641-844-1234. Mitchell Family Funeral Home is caring for Larry and his family.

Born on March 4th, 1938, in Marshalltown, he was the son of Dale Elgin and Goldie Maxine (Foreman) Campbell. He received his education in the Laurel Schools. On May 10th, 1958, he was united in marriage to Barbara Lounsberry at the Bethany Evangelical Brethren Church in Marshalltown.

Larry served his country honorably and passionately in the United States Air Force from 1957 until 1977. The couple called many places in the world home until returning to Marshalltown after 20 years in the active service. In 2000, they moved to rural Beaman to the country home they always dreamed of owning.

After retiring from the military, Mr. Campbell was employed as a truck driver, delivering RV’s across the country, and worked for the Marshall County Veterans Affairs. Truly a man of God, he was a member of the Calvary Baptist Church in Union, and led his life daily in ways to help others. He was a passionate advocate of veterans and supported them through his computer research on their behalf long after he retired from his position with the county. Larry loved working with his hands, especially in creating beautiful pieces with wood.

Larry authored a poem “Today We Lost a Veteran” which he framed and delivered to area funerals of veterans. He was a Viet Nam veteran himself and a lifetime member of the VFW, American Legion and AMVETS.