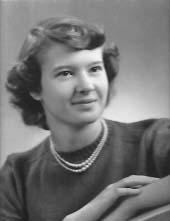 Janet was born to Juanita (Mason) and Durwood Wintrowd in 1933 in Toledo, IA at the home of the midwife near her mother’s home. Her home was Garwin, Iowa in the country family home. Her family moved from the Garwin area when Janet was 12 years old to Marshalltown. She attended the First Baptist Temple Church in Marshalltown and later joined the church at the age of 14. Janet was married at the church to Wilbert “Dick” Butters in a double wedding service with Don and Jeanette Johnson. After the wedding the guys had a few hours to spend with family before they had to return to Fort Riley, Kansas, where they were in infantry training and were to be sent to Korea and Japan.

In Janet’s later years she was fond of traveling with her husband, Dick, and keeping her mind sharp by doing word find puzzles.

Janet is preceded in death by her husband Dick, parents Durwood and Juanita, and a son in infancy, Richard Kenneth Butters.