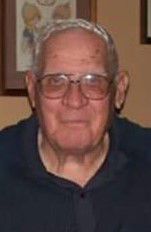 Harlan Hazen, 92, one of the greatest generations, passed away in the peace and comfort of his home on Monday, April 20th.

Private family funeral services will be held for family on Saturday, April 25th, at Rose Hill Memorial Gardens. Due to state mandates, no public services will be held at this time. For condolences, please visit www.mitchellfh.com. The Mitchell Family Funeral Home is caring for Harlan and his family. Ph. 641-844-1234.

Born on September 27th, 1927, in Marshalltown, he was the son of Fred and Lida (Snyder) Hazen. He received his education in the area of his birth. Harlan served his country honorably in the United States Army at the end of WWII.

On August 18th, 1945, he was united in marriage to the love of his life, Dorothy Slifer, in Atchison, KS. They made their home in Marshalltown all of their married lives where he operated heavy machinery and equipment.

Harlan was a former member of the Moose Lodge and served as a drummer in a country western band years ago and also did a comedy routine as a hillbilly. He and Dorothy enjoyed traveling and made crafts together and sold them at events and made wood train letters for all their grandchildren. A weekly highlight was traveling together to Des Moines to Bonanza to eat.