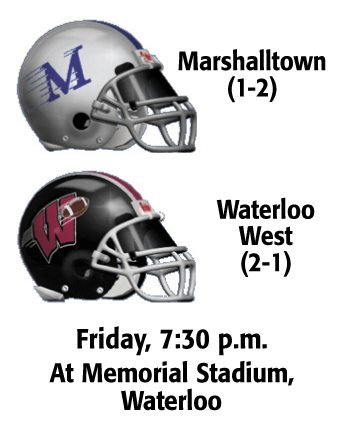 Last Friday, the Marshalltown football team suffered an agonizing three-point defeat at the hands of Waterloo East in a game that featured a litany of errors by the Bobcats (1-2) that could have swung the momentum in their favor.

Looking towards the team’s upcoming road matchup with Waterloo West on Friday, MHS head coach Adam Goodvin said his guys are eager to get back onto the field and hopefully wash the taste of last week’s 19-16 home loss out of their mouths.

“That one was tough to swallow, losing any close game like that is hard no matter who you play,” Goodvin said. “Our guys have bounced back well I think, they are excited to get back out there on Friday and compete.”

After losing such a close game, some coaches choose to not watch the game film and put the past behind them, but Goodvin said he and the team took time to study just what went wrong last week against Waterloo East before setting their sights on this week’s matchup.

“You want to look at the film and learn from all the mistakes and use that as a teaching moment, and then we buried it and come out on the practice field and try to limit those mistakes,” Goodvin said.

Waterloo West (2-1) lost a dynamic, play-making quarterback in Devon Moore — who now plays in an Iowa State uniform — but taking his place is senior Cadd Dodd, who has already thrown for over 700 yards in the first three games.

Goodvin said the Wahawks have a lot of talent on the offensive end, but he thinks the defense is prepared to limit their attack.

“They lost a good quarterback from last year who’s in Ames right now, but they have some good athletes back and some fast kids and that’s no secret,” he said. “We watched film on them and hopefully we have a good game plan and our kids can execute and it all goes well.”

“It’s been awesome to see their improvement throughout the first couple of weeks here,” Goodvin said of his defensive backfield. “We only look for them to keep improving and I think they will. I believe in those guys and they believe in our system and what we do and what coach Eggleston prepares for them, so hopefully good things will happen.”

Last week, the Bobcat offense had its best day of the season, as quarterback Sam Irwin threw for 163 yards and a touchdown and ran for 121 yards and a touchdown. Junior Alex Rockingham also was effective running the ball, chipping in 43 yards on the ground, and senior Josh Melde caught two passes for 54 yards.

Goodvin said the Waterloo West offense is an athletic unit, much like its offense, but the Wahawks don’t bring anything the Bobcats haven’t already faced this year.

“They like to take advantage of their athleticism, they will show some man and they like to mix it up and keep the offense off balance,” he said. “They aren’t going to show us anything we haven’t seen, our guys are prepared for any look we see secondary-wise and up front. They keep it pretty consistent so it all comes down to execution and being tough and physical.”

Fortunately for Marshalltown, it’s already been in this situation, looking to bounce back after a home loss with a road win. After losing to Ames to start the season, the Bobcats went on the road and defeated Mason City in a tight 16-13 decision.

Goodvin said that experience of shaking off a loss with come in handy when the team travels north on Friday, but they still need to bring some extra pop if they want to walk out of Waterloo victorious.

“We have been telling them to play with that chip on their shoulder,” Goodvin said. “We have to be the more physical team and set the tone and come out and give it 100 percent every single play and compete to give ourselves a chance to win.”

Marshalltown and Waterloo West are slated for a 7:30 p.m kickoff on Friday at Memorial Stadium in Waterloo.