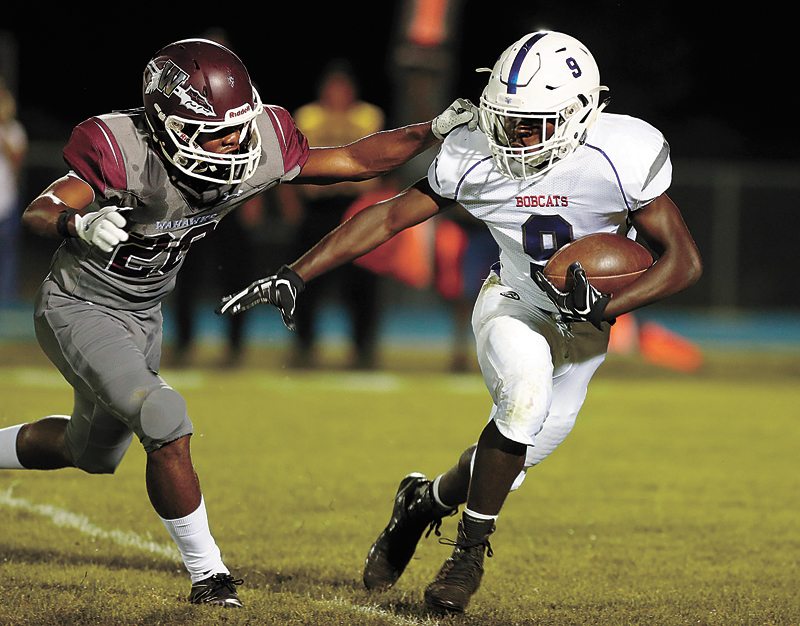 PHOTO BY MATTHEW PUTNEY/THE COURIER • Marshalltown running back Kabba Pins (9) tries to turn the corner on Waterloo West’s Zacc Sanders in the second half of Friday’s game in Waterloo. The host Wahawks won 56-14.

WATERLOO — Waterloo West wasted no time in taking control after it appeared Marshalltown was going to run stride-for-stride with the Wahawks.

Marrio Wright reeled in a 37-yard touchdown pass from Dodd to cap the game’s opening drive, but Marshalltown (1-3) responded with a quick scoring surge of its own. A 76-yard pass play from Sam Irwin to Josh Melde set up Alex Rockingham for a 3-yard touchdown run, and the Bobcats answered West’s fast start for a 7-all tie.

But Marshalltown didn’t score again until the fourth quarter, and Waterloo West went crazy in between. Richardson Gbeynie’s 32-yard touchdown run broke the tie and Dodd threw three more touchdown passes before a bad snap on a Bobcat punt led to a safety. Dodd found Wright for a third TD connection to take the game into halftime, 43-7.

“Our guys did a great job of responding to their first drive,” said MHS head coach Adam Goodvin. “We had a big play and drove it right down and got a score. The next drive we gave up a big score and the defense never could settle into a groove.” 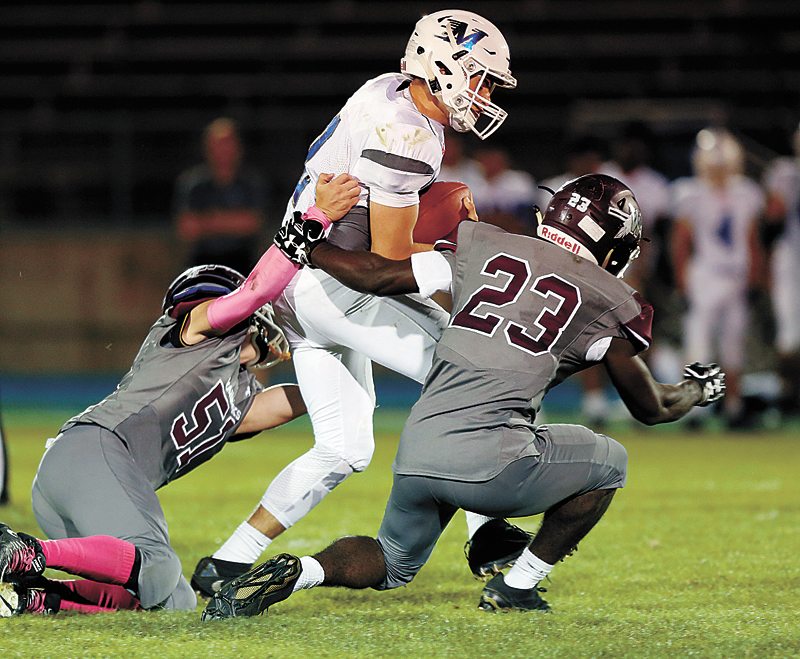 West (3-1) finished with a balanced attack of 258 yards through the air and another 235 on the ground, going for 493 total yards of offense in handing the Bobcats back-to-back losses going into next week’s Homecoming game and Class 4A District 4 opener against unbeaten Newton (4-0).

“We didn’t do a great job of putting our defense out there in great situations,” Goodvin said. “We’ve got to be able to flip the field and make it harder on their offense and give ourselves a chance.”

Dodd finished 8-for-12 for 258 yards with five TDs before relinquishing the quarterback spot for the second half. Wright had four receptions for 175 yards with three touchdowns.

Wyatt Himes led the Marshalltown offense with 20 yards rushing on three carries in the second half, while Irwin had 17 yards on the ground. Irwin was 10-for-16 passing for 161 yards, with Melde’s 76-yard catch and run accounting for nearly half of them. Noah DeVenney had two grabs for 32 yards and Dylan Eygabroad made three receptions for 28 yards.