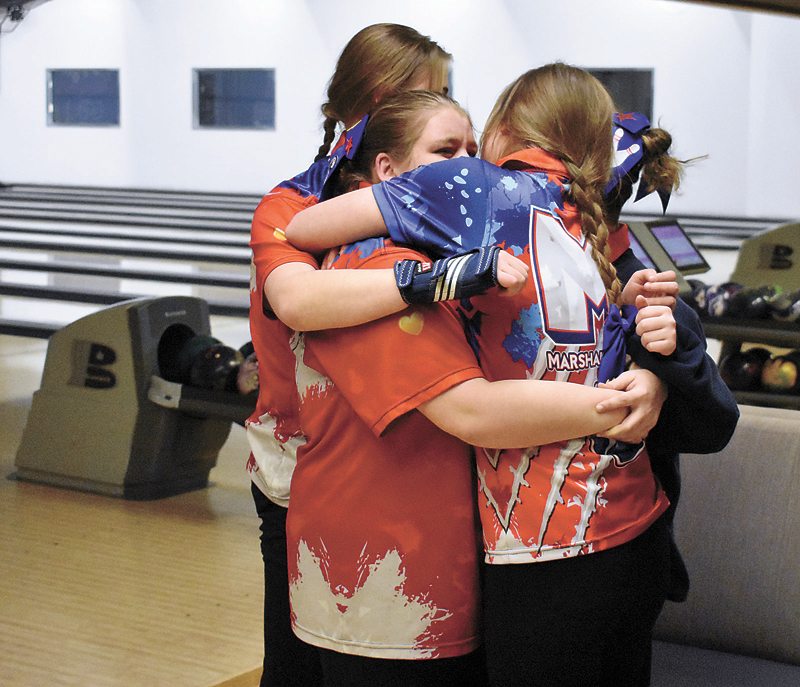 T-R PHOTO BY THORN COMPTON • Marshalltown senior Karlie Potter, center, is hugged by teammates Haley Bell, right, and Kylee Witt as she’s overcome with emotion after winning the individual district title at Wayward Social on Tuesday. Potter enters the state tournament as the top individual qualifier with a series score of 477.

Even before the Class 3A District 5 bowling joint qualifying started on Tuesday at Wayward Social, Marshalltown senior Karlie Potter seemed like a ball of energy.

She kept mentioning to her teammates and those around her that she was “pumped” for the meet, and that energy turned out to be something special, as Potter bowled by-far the best series of her career with a 477 to lead the individual scoring.

Not only was Potter’s 477 the best mark in District 5, it was the best score from any girl in the state at 3A, as Potter now enters the state tournament as the top-seeded individual bowler.

When asked if she knew coming in this was going to be her day on the lanes, Potter acknowledged she had an inkling.

“Kind of, a little bit,” she said with a wry smile. “I was ready for it, I promised my bowling coach that I was going to make it to state for him because he has known me since I was little, so I wanted to try and make that promise and keep it and make it to state, and then I did.” 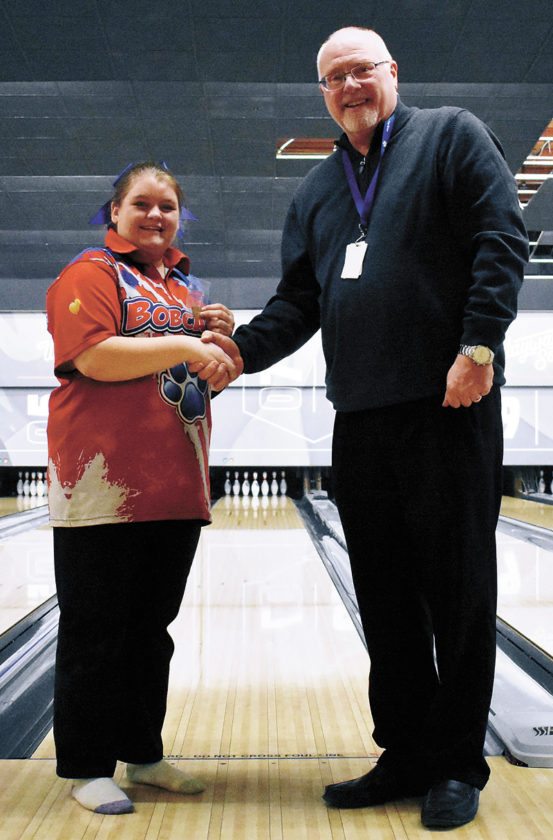 Potter stepped up to the lane for her final frame with a sea of people looking on. She managed to close out strong, though she was so far ahead that she likely could have thrown three gutterballs and still finished as individual champion, and when she turned back around a wave of excited faces cheered for her accomplishment.

Even with the people cheering, Potter said she didn’t quite realize what had just happened until her brother, Carson, hugged her and explained the situation.

“My brother came up and he hugged me and he was explaining to me that I made it, and I was so confused and I didn’t believe him,” Potter said, her voice raspy from cheering all day with her team. “Then it kicked in that I was like ‘oh my, I made it to state,’ and then I just started to lose it and I cried. And then I made [boys head coach Roger Taylor Sr.] cry when I hugged him, and Carson cried and everyone cried.”

Taylor wasn’t the only coach with wet eyes after the qualification, as MHS girls head coach Andy Schwandt also choked up a bit seeing Potter realize a goal she has worked so hard for.

“Karlie did an awesome job and as you could see the emotions were flowing pretty high with her, and so was everyone else, everybody is excited about Karlie being able to go,” Schwandt said. “That was her goal from the very beginning of the season, to go to state, and she showed up this afternoon with a vengeance. With those two scores of 238 and 239 and a 477 series, that was easily her best of the year.”

Once all the celebration for Potter had died down, it was time for the Bobcat girls to get back to business, as they held a narrow lead after the individual sets and heading into the Baker games.

It was a tight battle between Marshalltown, Linn-Mar and Johnston throughout the first three Baker games, with the Bobcats clinging to single-pin leads at times. In the last two games, the Dragons showed why they are perennial state competitors, as they combined to throw back-to-back 203 games to outpace Marshalltown and take the team qualification.

Schwandt said while his girls weren’t able to make it as a team, he is proud of what they set out to do this year and happy they competed so well.

“For this year, I can’t say enough positive things,” Schwandt said. “The girls did a wonderful job, Johnston just showed up and they were the better team there at the end.”

Now that she accomplished the first goal of making it to the state meet next Wednesday at Cadillac Lanes in Waterloo, Potter said there’s really only one other achievement to attain.

“To win state, that’s my new goal,” the top 3A qualifier said.