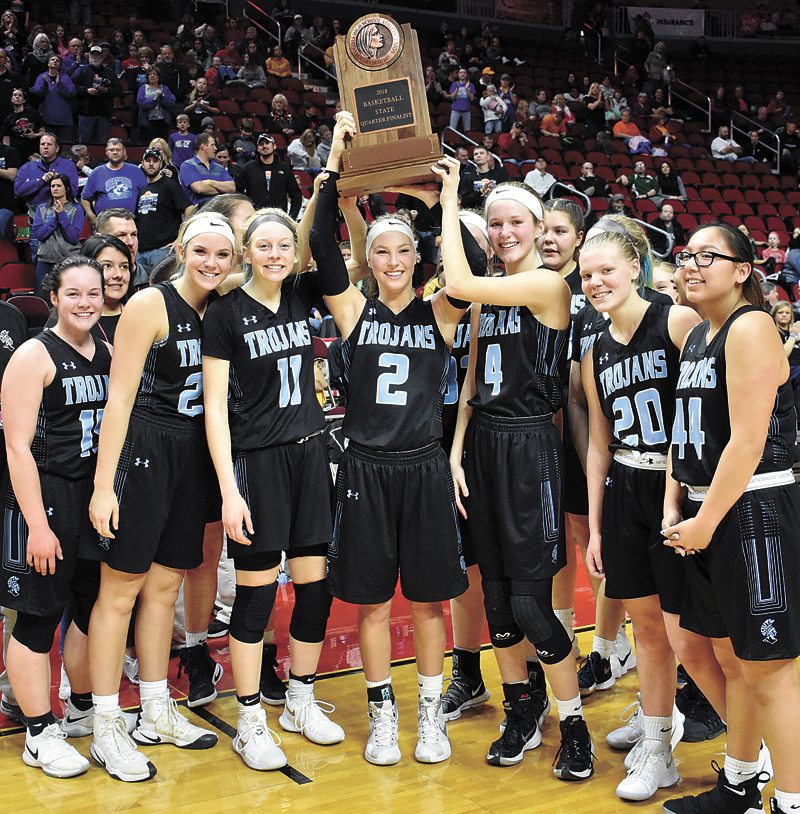 As decided underdogs, the Trojans tried to treat their Class 3A state quarterfinal as just another game.

Turns out it was, but only for top-ranked Crestwood.

The Cadets ran their record to 24-0 with a decisive 66-28 victory over South Tama, ending the Trojans’ season abruptly on Tuesday afternoon at Wells Fargo Arena.

Crestwood’s 6-foot-2 sophomore center Sharon Goodman finished with a double-double of 20 points and 10 rebounds and senior Shannon Pisney added 19 points as the Cadets did to the Trojans what they’ve done to all comers this season. Undefeated with an averaging winning margin of 39.5 points per game, Crestwood cruised into the state semifinals in similar fashion. 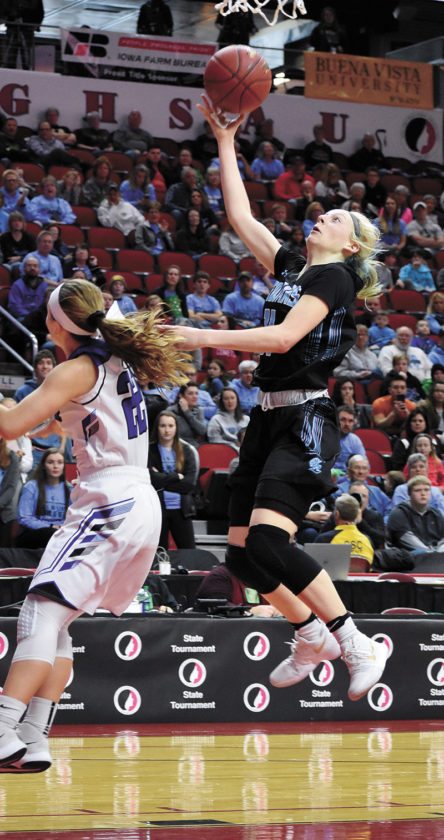 South Tama junior Jessica Musgrave posted a double-double of her own with 14 points and 10 rebounds, but the Trojans (15-10) fell behind by double-digits after the first quarter and remained well out of range for the remainder.

“No one expected us to be here so whatever the outcome was, we were going to be happy with,” said Sadie Smith, the only senior on STC’s roster. “It meant a lot being able to get the trophy as the only senior. It’ll be something I’ll remember forever.”

The Trojans, who stunned No. 6 Roland-Story in the regional semifinals before beating West Marshall to advance to state, simply were outmatched by Goodman and Co. Crestwood scored the game’s first six points before Musgrave knocked down a long 2-pointer, and a free throw for Smith with 2:34 left in the first quarter was the last time the Trojans scored for the next four minutes.

The Cadets led 14-3 after the opening stanza, and South Tama head coach Todd Dale saw the writing on the wall.

“When nothing we shot was falling, when Jessica Musgrave misses two-straight layup shots, you know it’s going to be a rough night,” said Dale. “I don’t think you can keep the ball out of [Goodman’s] hands. Our thought was if we can slow her down, and at times we did a good job, but we just didn’t have enough tall bodies to put against her to do it, and we weren’t shooting good.” 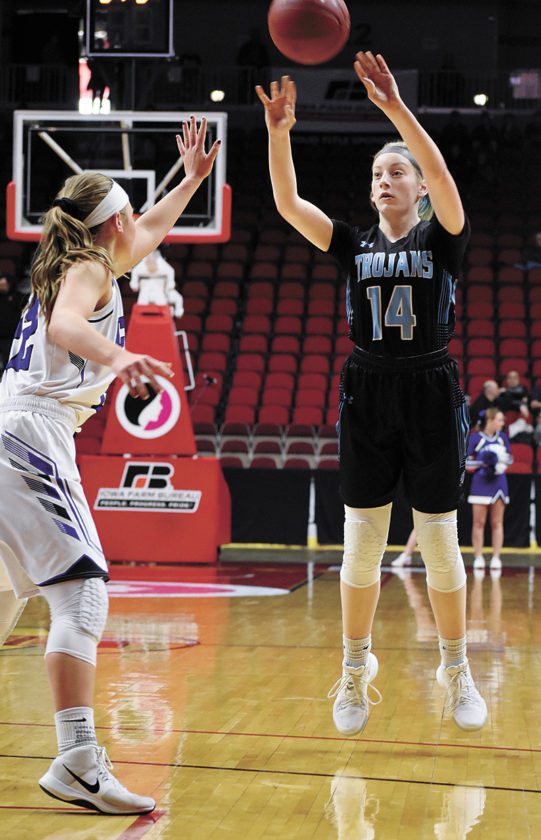 Musgrave ended the day 4-for-20 from the field, while her younger sister Carissa was 2-for-9 with a pair of 3-pointers and was next in line with six points.

“Coming in being like a rebuild year, that’s all I could ask for was to get to state, but it’s kind of sad it came to an end,” said Jessica, 3A’s third-leading scorer at 22.2 points per game. “I knew they were good and saw their scores but I was like, ‘we can hang.’ You’ve got to have that attitude, but they were pretty good.”

Goodman (16) and Pisney (12) helped Crestwood take a 40-12 halftime lead. Emily Friesen pushed the pace for the Cadets and had eight assists before intermission, finishing with nine points, 10 assists and nine rebounds in a well-rounded outing.

“I knew coming in we were going to give them problems inside with our 6-2 girl, so when we can come down and score easy baskets and they struggle, it makes the game appear to be a little easier than it is,” said Crestwood head coach Doug Sickles. “But I was impressed by all South Tama’s kids and I was extremely impressed by their tournament run. They kept their composure in some really big games and we were really hoping not to get it to that point.”

The Cadets opened the second quarter with a 17-1 run and eventually got the deficit beyond 35, forcing the running clock at the 3:25 mark of the third quarter. 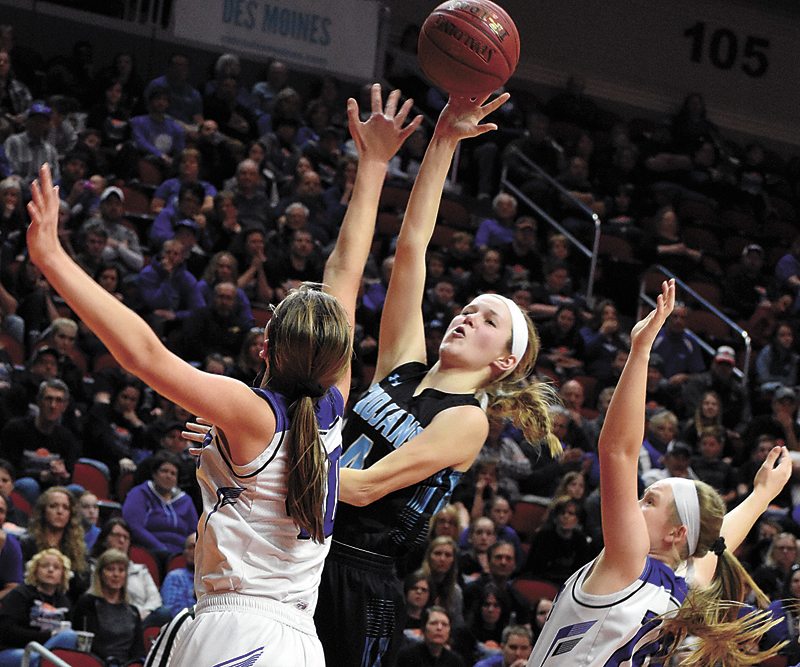 “We knew it was going to be a struggle,” Dale shrugged. “Goodman is 6-2, she looked like she was 6-foot-6 out there against us. We don’t have a lot of height so we knew that was going to be a challenge. We just knew we had to shut her down and we were unable to do that and that’s the results.

“We made it, we made it to state, and South Tama hasn’t done that for a few years so we’re proud to be here. The girls had a really good attitude about it. It’s just another game, we played some really tough competition and this is another one.”

The Musgrave girls combined for 20 of the team’s 28 points, while Berger finished with three, including the Trojans’ only other field goal. Enriqueta Diego pitched in a pair of free throws, while Makayla Backen and Zoee Buffalo both added one freebie.

Smith finished the final game of her senior season with one point and two rebounds in 20 minutes of playing time, including the final minute after coming back on the court.

“It felt awesome to end it here, I wouldn’t have wanted to end it any other way than to be at the state tournament, so it was an awesome opportunity as a senior,” she said. “It was always in my dreams, they always told us it was a rebuilding year and we proved everyone wrong so that feels awesome.

“It was pretty emotional knowing I’m not going to be able to put the jersey on again or have the opportunity to go farther next year. We just wanted to go out and have energy and play and have fun; have fun because it could possibly be our last game.”

And it was for Smith, but the rest of South Tama’s roster will return for next season. That, and the lopsided loss, will give the Trojans something to shoot for next winter.

“I love that [Sadie] can come back home and say, ‘we did that,’ and remember all the memories we made,” Jessica said. “It was a fun time coming here, it was a really great experience. We didn’t want to come in so serious, just being here is fun, but whether we won this game or lost it, it didn’t matter. We were the underdogs and didn’t really have pressure on us.

“I’m definitely going to be more hungry. It’ll be my last year and I’m going to go out with as much as I can.”