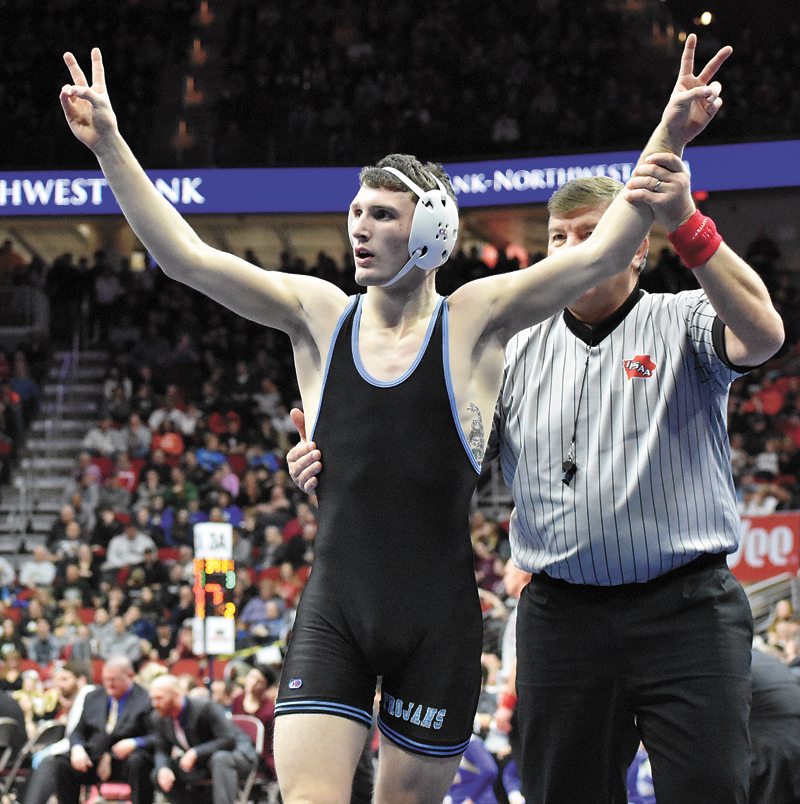 T-R PHOTO BY THORN COMPTON • South Tama County senior Isaac Judge raises two fingers on both hands to the crowd after winning his second-straight Class 2A state championship at 152 pounds on Saturday night in the Iowa High School State Wrestling Championships. The title makes Judge the first ever Trojans with multiple championships.

DES MOINES — For those who haven’t witnessed finals night in Wells Fargo Arena for the Iowa High School State Wrestling Championships, there are a few words that explain the proceedings but one sticks out the most.

Everything feels bigger, and therefore everything also takes much more time, as finals wrestlers have to sit through consolation matches all morning, then go through the Grand March of placewinners, then sit and wait for their name to finally be called to the mat.

Guys who have never experienced the environment don’t necessarily know what to expect, but that wasn’t the case for South Tama County senior Isaac Judge, who was defending his title from last season in the Class 2A 152-pound championship match against Kyler Rieck from Spirit Lake Park.

Judge, who has been ranked No. 1 in the class virtually all season, said after making it to the finals Friday that he had a better idea of what to expect and how to prepare for Saturday night, and boy did that preparation show. 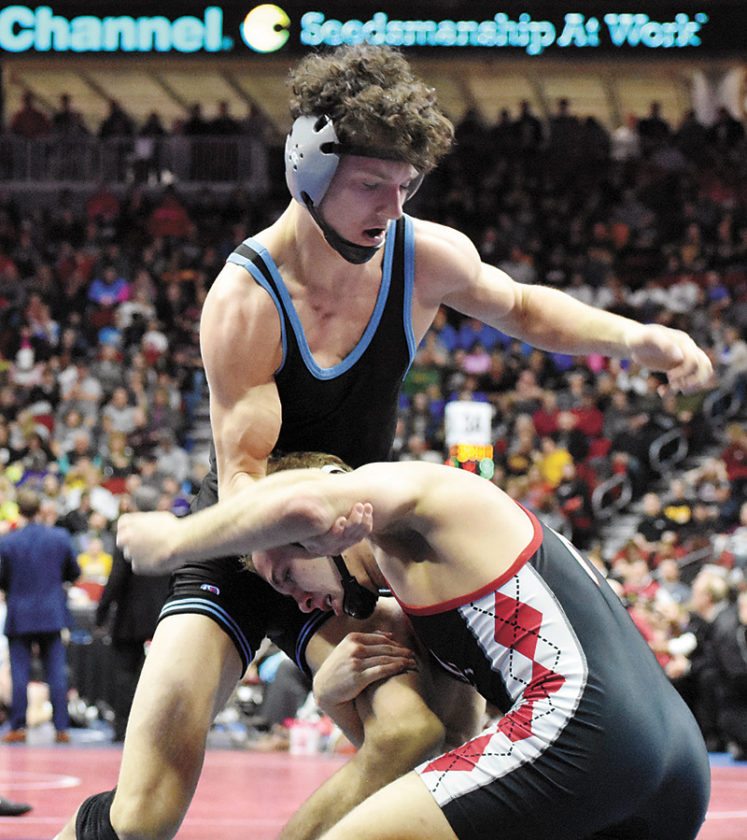 Judge never trailed against Rieck, scoring an early takedown in the first period then adding another two points off an escape and takedown in the second period to finish with a 5-0 victory and become the first ever two-time state champion in Trojans history.

After running off the mat and back into the preparation area in a fit of excitement, Judge caught his breath and said he was overcome with how proud he was of what he just accomplished.

“I got it done and it’s a great thing, great season, great team to be with and I am very proud,” Judge said. “I wanted to push the pace a little more, I should have scored another takedown or maybe even two, give him a point, but I wrestled a smart match, got my points when I needed him and rode him out. He wasn’t doing nothing on bottom so I had to wrestle the match that he gave me.”

Last season, though Judge was highly ranked for much of the year, he wasn’t necessarily expected to take the bracket in his second state tournament bid. Obviously that wasn’t the case this year, and he said that being the hunted instead of the hunter was something he had to get used to.

“The biggest thing was having a target on my back. Last year Joe Kelly, a good competitor, he had the target on his back and I was ready to go get him,” Judge said. “Now this year was ‘Isaac Judge is No. 1, Isaac Judge needs to start doing stuff,’ and I did. I beat a lot of ranked kids badly and I came up short twice, so that really just drove me to be the best I could be.” 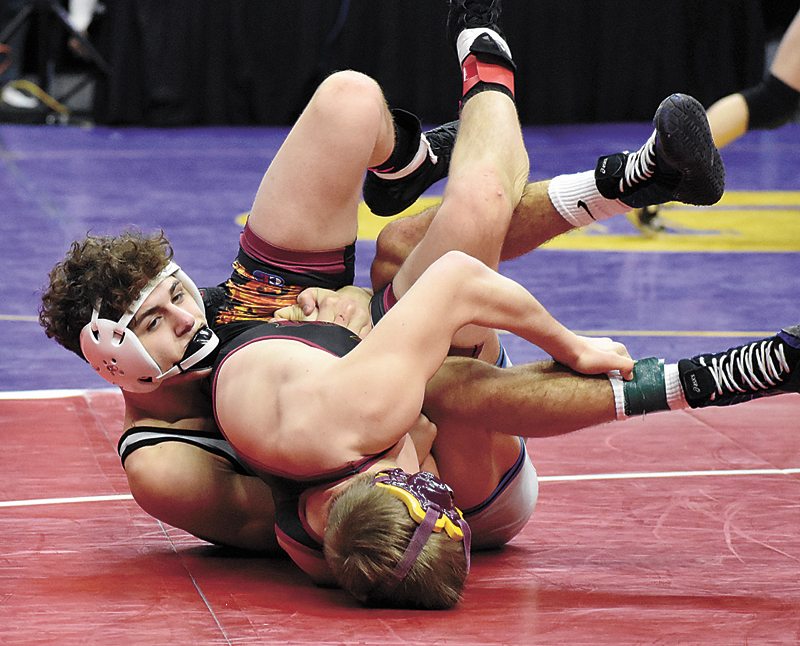 South Tama head coach Nate Van Dyke, who won a title at 152 for the Trojans back in 2003, said Judge’s confidence was at an all-time high heading into the match, and that was just one of the differences between he and his opponent.

“He has a high level of confidence and that comes from earning it,” Van Dyke said. “He’s worked very hard and he’s earned it over a long period of time. Not just this season but all the time he put in during the summer and since he was a little kid.”

Judge wasn’t the lone competitor in the finals for STC, as Brady Fritz faced off with Matt Robertson from Davenport Assumption in the championship match at 132. For a long time, it seemed that Fritz was going to pull out the victory, as he led 3-0 with time running out in the third period, but fans were reminded of just how quickly things can turn in this sport.

Fritz got thrown by Robertson and landed on his back, giving up a takedown and a two-point nearfall at the five-minute mark. Fritz nearly had an escape about a dozen times in the final minute too, but Robertson was able to hold on, quite literally, for a 4-3 decision.

Van Dyke said he will celebrate Judge’s accomplishment, as will the rest of the team, but watching Fritz lose so close before was heartbreaking. 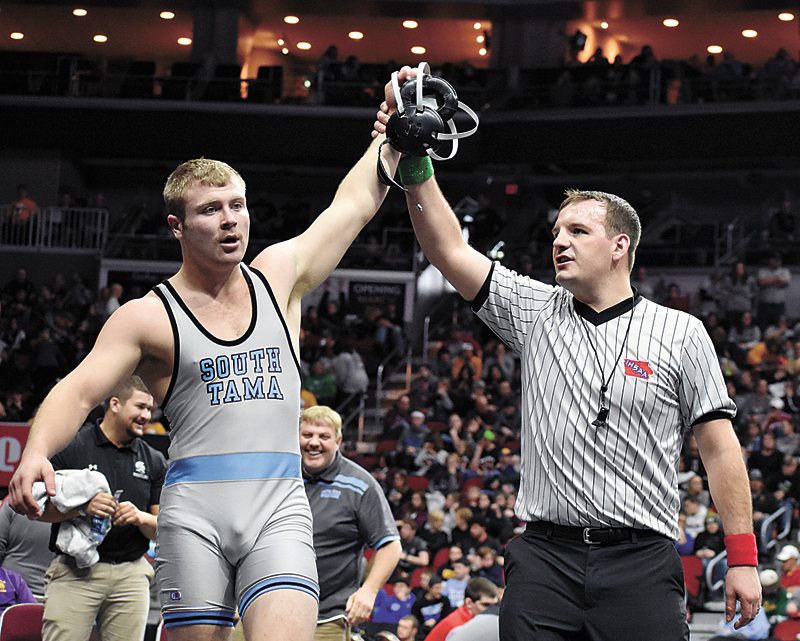 “It’s hard to get really excited because in the back of your mind you feel really bad for Brady,” Van Dyke said. “He wrestled a good match, he dominated for four and a half or five minutes and he had earned it too his whole life and that was his goal too, so it was hard to see him fall short of that but that’s the sport of wrestling and that’s life. He is a resilient young man and he will be OK, it doesn’t define him as a human being but it’s hard to see him come up just short of his goal.”

Judge actually took time in his interview to talk about what Fritz has accomplished, and to say how much he respects his teammate and how his heart also breaks for his fellow senior.

“My heart is out for Brady, he wrestled an unbelievable match and got a move that the kid is great at so I think he beats that kid nine times out of 10,” Judge said. “He’s a great wrestler, probably one of the best in South Tama.”

Fritz still finished in second at 132, his best finish at the state meet of his career.

Also earning his highest finish at state was Tanner Probasco, who started things off for STC in the consolation semifinals after losing in the championship semis on Friday night. Probasco not only missed an opportunity to wrestle for a state title, that was his first loss of the season on Friday, so he had a lot to bounce back from if he wanted to still have a chance at third.

After a stalemate in the first period against Easton Graff from Sergeant Bluff-Luton, Probasco opened up the scoring in the second with an escape, a takedown and a three-point nearfall. He would go on to win by an 8-0 major decision, then Probasco won by the same margin against Colby Tool from PCM with a 9-1 major decision to finish third at 138.

T-R PHOTO BY THORN COMPTON • South Tama County senior Isaac Judge raises two fingers on both hands to the crowd after winning his second-straight Class 2A state championship at 152 pounds on Saturday night in the Iowa High School State Wrestling Championships. The title makes Judge the first ever Trojans with multiple championships.

T-R PHOTO BY ROSS THEDE • South Tama County players celebrate at center court after the final buzzer sounded on the Trojans’ 38-36 victory over West Marshall in the Class 3A Region 7 championship game Saturday at the Roundhouse.

Probasco said he of course would have preferred to be winning the championship bracket, but a consolation bracket win is a nice way to finish his career.

“Last year I had a terrible tournament here,” Probasco said of his motivation. “I went 0-2 and I knew I was better than that so I wasn’t going to let it happen again.”

Probasco’s season was in jeopardy even before it began, as he suffered a torn labrum in his shoulder during the football season that causes subluxation, meaning his shoulder is constantly dislocating itself. Van Dyke said for him to fight through something like that and still finish 30-1 on the year with a third-place medal from state is an unbelievable feat.

“What he did was amazing this year,” Van Dyke said. “He tore his labrum in football and his shoulder sublexes every day and that’s just another level of toughness. What he did to have a one-loss season and come up finishing third place at state is amazing. I am going to be talking about him to a lot of teams for a long time.”

This group of seniors who were all at state — finishing off with Dalton Rosenburg and Colton Vest who placed seventh and eighth respectively at 182 and 145, along with Mario Moncada who was eliminated on day one at heavyweight — is also a group that will be fondly remembered by Trojans fans for generations to come.

When they were freshmen in 2015, the team didn’t qualify a single wrestler for state for the first time in 28 years. Now, just three years later, South Tama finished third in 2A with 75 points and they had five out of six qualifiers finish on the podium.

Judge said to be a part of this group and to now go down in Trojan history as the first ever multi-time champion is almost overwhelming.

“I came here for one reason, I came here to be with the team and I came here to wrestle the Trojan tradition,” he said. It means a lot, there are probably people who should have won two times before this, but it’s a great tradition and I wanted to be a part of that and now that I made history it’s really fun.”

Now looking back on how far this group of guys has come, Van Dyke said he wishes he could have enjoyed this year a little more during the grind of the regular season, but it all paid off with a great finish at state.

“It’s been a blast working with them and all season the expectation has been higher so it’s hard to just relax and have fun with them in their last year, but this weekend I had fun with them and they didn’t disappoint,” he said. “They competed hard, I just loved being apart of it and they all have great support systems. They all build each other up and they are all great kids and it was an honor to be a part of that group.”