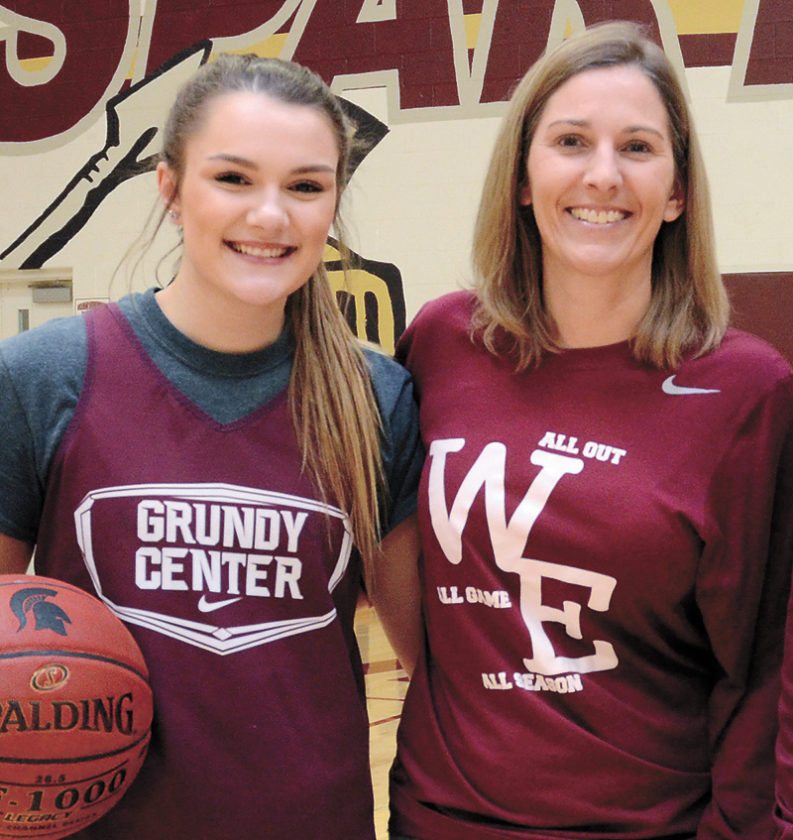 T-R PHOTO BY ROSS THEDE • Grundy Center assistant girls’ basketball coach Tiffanie Saak, right, and her daughter Cora pose for a photograph during a recent practice at Grundy Center High School. Tiffanie is back on the bench after suffering a stroke prior to the start of the basketball season.

GRUNDY CENTER — Tiffanie Saak remembers it being a normal day, the same as so many before. It must have been a Wednesday, because there was early dismissal and she was helping with practice prep.

Her daughter Cora sprang into the gymnasium with stories to share, and as quickly as possible. She had worked out her wardrobe for the upcoming school musical, but Tiffanie found herself struggling to zero in on her child’s words.

She took respite in the physical education instructors’ office, steadying herself in a chair near the door. One of the teachers turned and said something to her, but by that time she could barely understand the words as portions of her face started to feel numb.

With every ounce of dignity and self-preservation she could muster, Tiffanie turned to girls basketball coach Matt Lindeman and muttered, “Something’s not right, Matt.”

“My voice was going and he just looked at me and we were both thinking the same thing and he finally said, ‘Stroke?’ and I said, ‘I think so.'”

A 46-year-old assistant coach and mother to a junior on the Grundy Center girls’ basketball team, Tiffanie Saak was suddenly being driven to the emergency room after suffering a debilitating stroke.

“I was still walking and walked in [to the ER] and told them what had gone on and they did a couple scans here and they took me by ambulance to Iowa City later that night,” she said, recalling that forgettable day in November. “It was a rough night, I don’t remember a lot of it. Lots of family was there, I don’t remember a lot, they’ve told me more. I just remember waking up and being sick to my stomach, and both of my sisters were there taking care of me.”

While Tiffanie was being taken to Grundy County Memorial Hospital, basketball practice persisted. Members of the Spartans’ state semifinal volleyball team were back on the hardwood for just the third time, and expectations for the winter campaign were as high as ever. The Iowa Girls’ High School Athletic Union’s preseason poll listed the team ninth in Class 2A.

But Cora had more questions than Lindeman had answers, and the team tried to endure Tiffanie’s absence as though nothing had happened.

“When we were lifting my dad came in and talked to me, but the initial part of it was so shocking because you don’t expect that to happen to you. The whole team was there supporting me.”

Lindeman considered calling off practice for the day, but he knew Tiffanie would not have approved.

“I know Tiff well enough that she didn’t want us not being at practice,” he smiled. “I couldn’t stop thinking about her because once we got her transported, practice is going on and it’s weighing that we have a team but we also have a daughter here, too, and she hadn’t really seen what had gone on … and I didn’t have all the answers.

“Cora was so strong through that whole practice it was unbelievable.”

As Tiffanie began her long road back to full strength — she acknowledges she’s a long way from it — the girls on the team assembled their well-wishes and warmest thoughts on note cards and combined them with silly pictures in a photo book. Tiffanie takes it with her everywhere she goes, using it as a method of therapy and incentive to keep fighting.

She was hospitalized at the University of Iowa for five days before being moved to Covenant Medical Center in Waterloo, where the team first visited her following a scrimmage at Waterloo Columbus.

“My eyesight was really messed up initially — it’s still not perfect — but I tried to read one of those [note cards] a day and that was helpful,” said Tiffanie. “That was good motivation.

“At Covenant I tried to watch every game I could — I think all of them were live-streamed except the for the West Marshall and AGWSR games — but me watching at that point was interesting in and of itself. But at least I could see them.”

By the time Tiffanie returned home, it had been a month since she suffered the stroke. “It was weird not having her on the bench that first game,” Cora said. Danielle Schmidt, who had joined the basketball team as an assistant coach shortly after volleyball season ended, helped to fill the void while Tiffanie labored her way back into ‘game shape.’

It’s the first basketball coaching experience for Schmidt, who was a member of the last two Grundy Center squads to go to state in 2004 and 2005, and a position she hadn’t planned on pursuing when her family moved back home in October.

“At first, [Tiffanie] was a little quieter and felt like she was a distraction,” Schmidt said. “I think she’s realized people count on her, they want her there, she has so much insight from her own successful basketball career, and I’ve learned a lot from them.

“We’re just so glad that she’s back and able to be a part of it and has been constantly getting better. I think having something like this probably even helps the girls want to play hard for her. It’s been huge to have her back and I’m so glad she’s been able to enjoy this ride with them.”

Tiffanie returned home to watch Cora take on more responsibility than ever before, assuming homemaking duties with a younger sister in the house and an older sister off at college. Tiana came back over holiday break to lighten the load, and family and community members showered the family with support.

“It’s humbling too because you go from trying to provide and be the parent to the kids were having to be the parent almost,” said Tiffanie. “Cora stepped up hugely at home because she’s the oldest child at home. Cora was there every day and had to take over some of the household things which she shouldn’t have to as a high school kid who’s very involved.

“Being able to come to practice daily is almost a therapy in and of itself. When I was first home, it’s tough, you’re wiped out and it’s tough to get out of bed in the morning, but it’s good to have a purpose. My kids are my purpose but this team is a purpose as well and they were there for me. I guess I hope I can return the favor.”

Tiffanie’s return to the bench, much like her battle to return to a regular home life, was a tedious process. It started with attending practice as an observer, and then watching games from the bleachers.

“She always did and still does work super hard to try and gain all that back and exercises at home,” Cora said, “and it was just really frustrating for her to not be able to do as much as she could.”

By the end of January, Tiffanie had recuperated to the point where she felt comfortable contributing to the team again. The Spartans were set for a pair of critical NICL West Division showdowns with ranked rivals West Marshall and AGWSR, and both games were at home.

Grundy Center prevailed over one and then the other, securing at least a share of its third-straight divisional title before claiming it outright with a win at South Hardin a week later.

Shortly thereafter, the Spartans started down the tournament trail with a full-fledged coaching staff and eventually advanced to state for the first time since 2005.

“I think we’re all generally tough people, and when it comes down to it we’re able to handle more than you think you can. It shows, one, that Tiff is one of the toughest people I’ve ever met, and two, I think there is definitely some symbolism of how tough [their family is] and how they reacted to all that and how tough our team is too.

“There’s been moments we all have where you understand you need to appreciate all you’ve got in life. Tiff’s a great example, you would never guess her to have a stroke but it happened so you appreciate every day, every minute, every hour and try and live it to the fullest.”

For Tiffanie, that’s climbing out of bed each morning and taking that next step toward a full recovery.

“My body tells me when I need to back off,” she said. “You learn patience in a hurry with something like this, but it could have been worse and there’s no other option so you do what you do.”