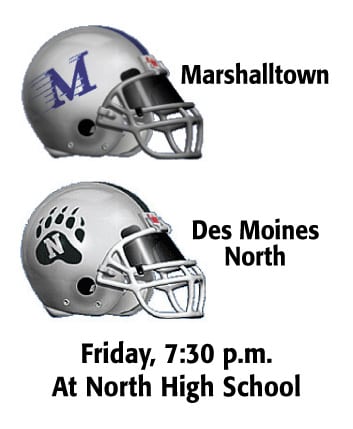 The long wait for football action is finally at an end as the Marshalltown football team gets its latest campaign underway on Friday night when it travels to take on Des Moines North starting at 7:30 p.m.

Bobcat head coach Adam Goodvin said the wait has been excruciating for both the coaches and players.

“It’s about dang time man,” Goodvin said during practice earlier this week. “We are sick of hitting each other but at the same time they are eager to get out there and win, very eager. They are itching to get out there, it’s been a long preseason and we are all ready.”

MHS football will have a bit of a different look in Goodvin’s second year at the helm, both in philosophy and in names on the jersey.

Senior Jacob Smith takes over at quarterback in place of the graduated Sam Irwin, who started the previous two seasons behind center for the Bobcats.

“He’s waited his turn and he’s ready to go,” Goodvin said of the lefty signal caller.

Making sure Smith is upright and completing passes is a talented group of offensive linemen who Goodvin said have been impressive so far in camp.

“Offensively it all starts up front with Keaton Baccam and Kyle Griego, our returning senior offensive linemen,” he said. “David Brintnall, an offensive lineman who had some time last year, we are going to be counting on him too.”

Also bringing Smith along quickly is an experienced group of skill players who all saw significant time last year for MHS.

“At running back we’ve got Kabba Pins and Giorgio DiIorio and Alex Rockingham,” Goodvin said. “[At receiver] Jonathan Hernandez and Dylan Eygabroad, they are both fast kids that are very smart and play really hard, so they will be fun to watch and hopefully we can get them the ball a lot.”

Rockingham and DiIorio were the top rushers a season ago, while Pins is making his first foray into the backfield at the varsity level. Goodvin said those three will be big in bringing the Bobcats to more of a balanced offensive attack, after having 1,480 passing yards to just 746 rushing yards in 2017.

Eygabroad and Hernandez were the No. 2 and 3 receiving threats last year behind graduated senior Josh Melde, and they combined for over 500 yards receiving and three touchdowns.

No team is where they want to be entering the first game of the year, and Goodvin said Marshalltown is no exception, but he thinks they’ve made some great progress and have a good base down for what they want to do offensively.

“We will do what we have to do, we want to win the football game,” he said. “We’ve spent a lot of time on our base plays and we believe those are our strongest plays, so we will stick with our guns and we will see where that gets us.”

On the defensive side senior linebacker Jonathan McKeever is the top returner, coming off of a season where he finished fourth in tackles behind Blake Linsenmeyer, Cole Tesar and Melde, who were all lost to graduation.

Goodvin said though there are holes to fill, he expects his defense to come out with a hard-nosed approach to stopping what could be an opportunistic Des Moines North offense.

“It comes down to being more physical, we have to come out and punch them in the mouth and set the tone,” he said. “North always has great athletes, they’ve got speed and they can be a scary bunch. You have to keep that in the back of your mind, at any moment they could run by you and throw something up and score. We have to be really aware of their personnel and their speed on the outside.”

Last season the Bobcats and Polar Bears combined for a 1-17 record, with the Marshalltown accounting for the only win. Goodvin said though North didn’t come away with any victories in 2017, his guys can’t come out thinking this game will be a walk in the park.

“You see our record last year and this is a new team, but everyone is going to think they are coming to give us their best fight to win a football game,” he said. “We are going to have to go out and prove them wrong, we are going to get what we earn.”

Everything is new for teams starting their season this week, and with that in mind Goodvin said he isn’t worried about what the Polar Bears will be bringing onto the gridiron because he has his own team to consider.

“It really is all about us because we don’t even have film from Des Moines North from this year,” he said. “We can put some of our scouting into last year’s film that we have, but that just forces us to get better at what we do. The message this week is we have to be a tougher, more physical team than them and hopefully we can grind it out and come away with a win.”

With only nine games in a season teams know there is a small margin for error if they want to be successful. Goodvin said his Bobcats need to take the opportunity in this first game to set the tone for what Marshalltown football will be in 2018.

“It’s huge that you can go out and hopefully get a first game victory and get your confidence up,” he said. “That’s what we need, these kids have worked their tails off all summer and they’ve really bought in to what we’re doing offensively and defensively, so I hope it pays off for them.”