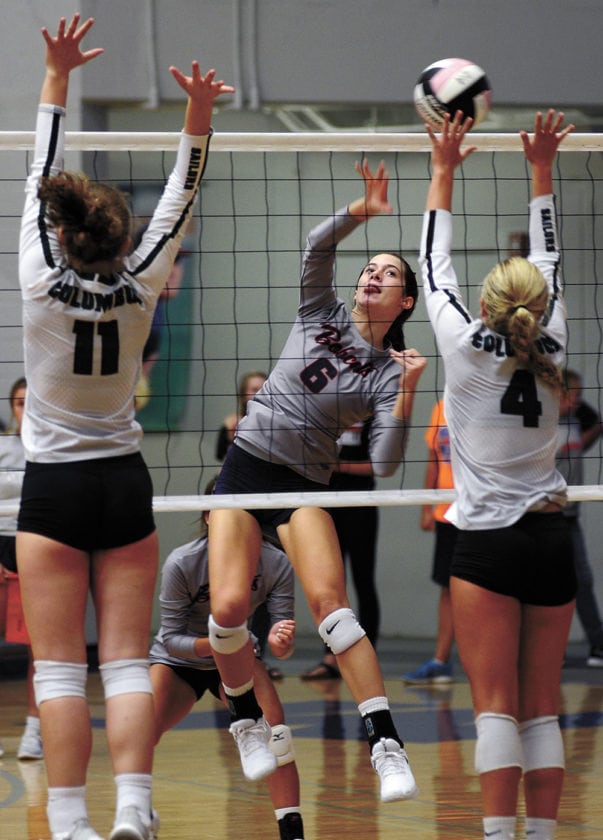 T-R PHOTO BY ROSS THEDE - Marshalltown’s Erica Johnson (6) tries to split the block of Waterloo Columbus defenders Megan Knudston (11) and Emily Surma (4) during the second set of their match at the 2018 Marshalltown Apgar Volleyball Tournament on Thursday night at the Roundhouse.

As unranked Solon lined up for a team photo after going 3-0 to win the 2018 Apgar Volleyball Tournament, members of the unranked Marshalltown squad circled around head coach Chris Brees after an 0-3 night at the Roundhouse.

Only one point separated the teams in their head-to-head battle, including a two-point outcome in the deciding third set, but the Spartans captured the momentum that propelled them past a pair of ranked foes.

Marshalltown, meanwhile, came up empty the rest of the way after nearly knocking off the eventual tournament champions in the first round of Thursday’s four-team, round-robin event.

The Bobcats endured a slow start and still nearly came all the way back to beat Solon, falling 21-18, 17-21, 15-13, in the opening match. The Spartans went on to knock off Class 3A No. 6 Waterloo Columbus and 4A No. 5 Waverly-Shell Rock, but Marshalltown was swept convincingly by both ranked opponents.

It looked a lot different than Tuesday’s season-opening sweep of Des Moines Hoover, but so did Marshalltown’s opponents. 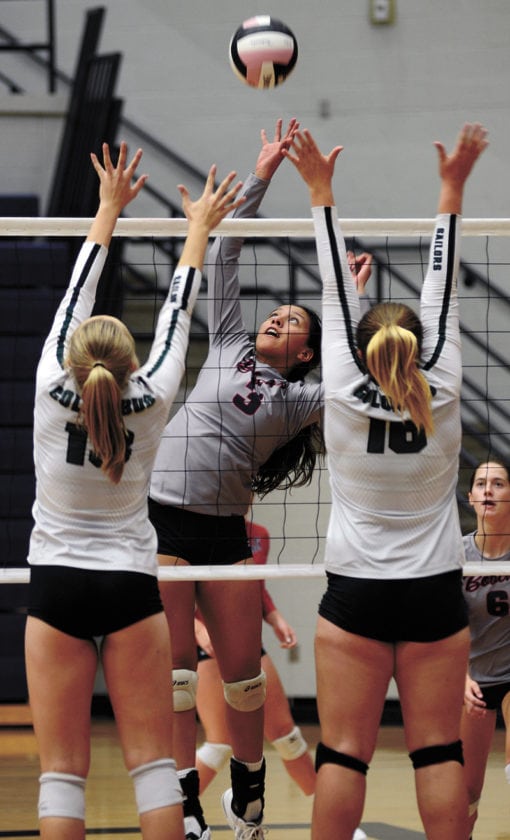 T-R PHOTO BY ROSS THEDE - Marshalltown’s Yatnia Hernandez (3) tips the ball over the double block provided by Waterloo Columbus defenders Avery Kroll (13) and Ali Vesely (16) during the second set of their match Thursday at the Roundhouse.

“The experience showed tonight, but it’s OK,” said Brees. “We did some things really well and it’s a learning night every single night. We needed this because this is what our conference is like.”

So as Solon celebrated its Apgar Tournament title, Brees urged his team to focus on more than wins and losses and find the competitive edge that was clearly missing.

“It’s not about how many kills we had or anything, it’s about our lack of intensity,” Brees said. “That’s what I told them in the huddle is the one thing you can control, you can control your intensity and your competitiveness.

“We lost some good seniors last year, but we lost some seniors who competed. What we’re missing is that, even in practice — competing, going after it hard — so that was probably one of the disappointments tonight because I thought we’d want it more than that.” 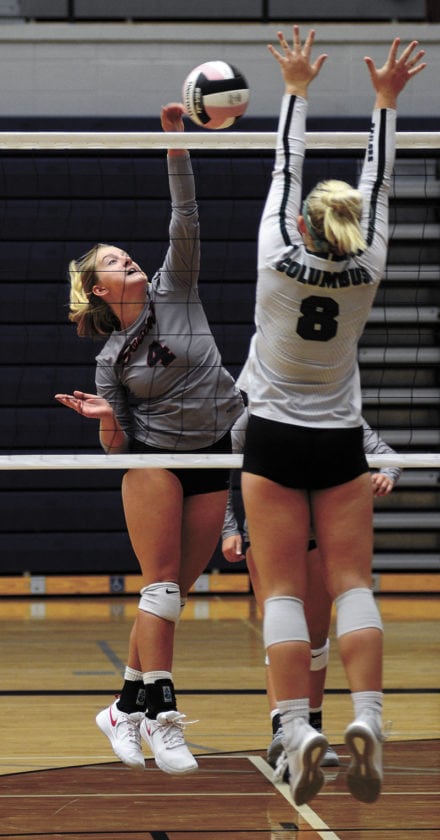 Brees broke serve in the second set of the Bobcats’ finale against Waterloo Columbus, raising his voice during a timeout to the point that all the fans lining the stands at George Funk Gym could hear him. He wasn’t yelling at them, though. He was yelling for them.

“The minute a coach has to start being the cheerleader you put us in a difficult situation because I need to be coaching against the other team,” Brees said, “not trying to coach us to be intense and have excitement. They’re in high school, that should just be natural. Stop taking the game so serious and have fun.

“I wanted everyone to hear me.”

Marshalltown’s tournament began with an 11-0 deficit for the hosts against Solon, but MHS rallied all the way back to within a 21-18 loss in the opening set. The Bobcats took the next game, 21-17, before falling 15-13 in the best-of-three finale.

Erica Johnson had five of her team-leading 12 kills in the match, while Autumn Finch finished with four kills and both Madi Finch and Gabby Himes had three kills. Alyvia Chadderdon and Madi both had 11 digs, Johnson served 12-for-13 with one of the team’s seven aces, and Autumn had the team’s only block of the night. 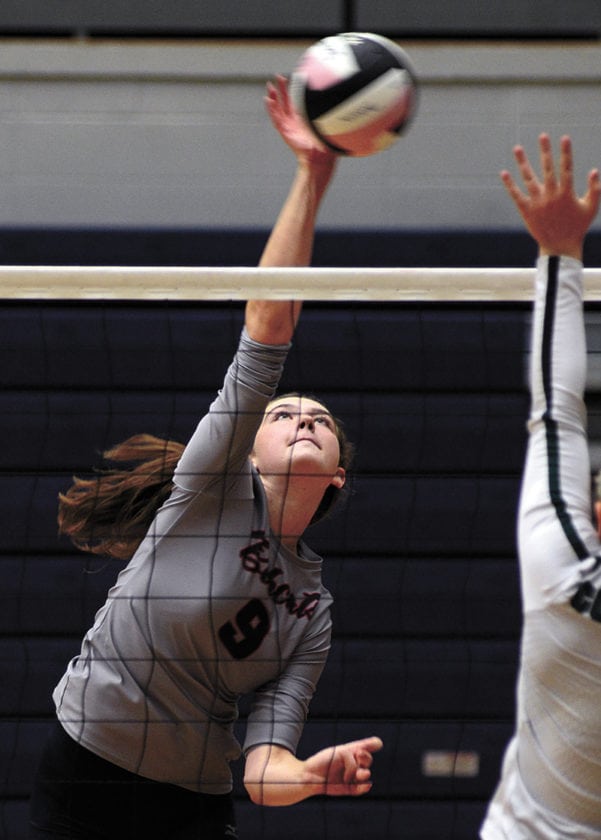 “Us and Solon are unranked, Solon beats everybody, we took Solon to three, we were down 11-0, should have won that third game,” Brees summarized. “That shows a maturity level that we’re not at yet, and it’s not even a maturity level based on their grade because even some of our upperclassmen don’t have court experience.”

In addition to leading the Bobcats with 12 kills on the night, Johnson was the top server going 25-for-26 with an ace in addition to contributing 15 digs. Madi ended with 19 assists, 16 digs and 16-for-16 serving with one ace, while Alyvia Chadderdon led with 23 digs and was 14-for-16 serving with a team-best three aces. Mayah Carson came off the bench to contribute three aces, too.

Hayden Oetker came away with eight kills, as did Autumn, while Kyra Feldman chipped in six digs. Grace Fisher served 14-for-14 with an ace.

Marshalltown finished the night with 11 service aces and 11 service errors, however.

“The problem is we get caught up on is it a win or a loss,” Brees said. “My thing going into it is we just want to get better and we want it to show on the stat sheet. Tonight I’m not sure we got a single block and we missed a ton of serves. I look at more of those things because against every team [tonight] we were at a point in a match where we could beat them and then we missed a serve and we couldn’t pass tonight to save our lives — which is really our strong suit.

T-R PHOTO BY THORN COMPTON – BCLUW junior Madi Ubben (10) goes up for a hit while Gladbrook-Reinbeck senior Rachael Scarf (2) attempts to block it during the Comets’ straight-set win over the Rebels in Reinbeck on Thursday.

T-R PHOTO BY ROSS THEDE – Marshalltown’s Erica Johnson (6) tries to split the block of Waterloo Columbus defenders Megan Knudston (11) and Emily Surma (4) during the second set of their match at the 2018 Marshalltown Apgar Volleyball Tournament on Thursday night at the Roundhouse.

T-R PHOTO BY ROSS THEDE – Marshalltown’s Yatnia Hernandez (3) tips the ball over the double block provided by Waterloo Columbus defenders Avery Kroll (13) and Ali Vesely (16) during the second set of their match Thursday at the Roundhouse. 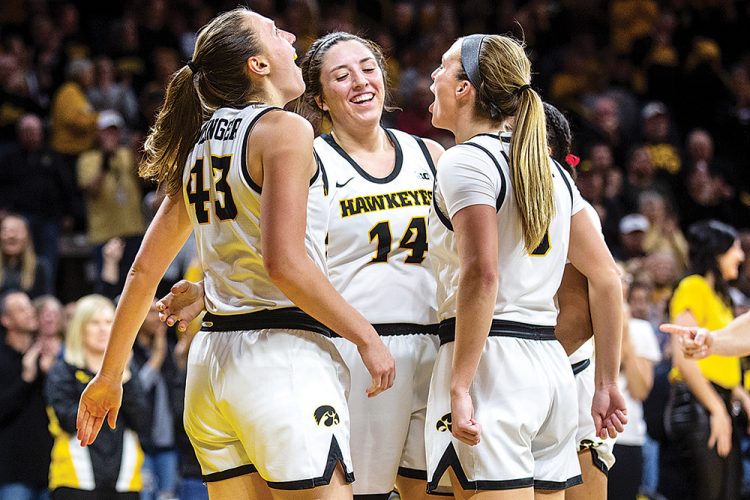