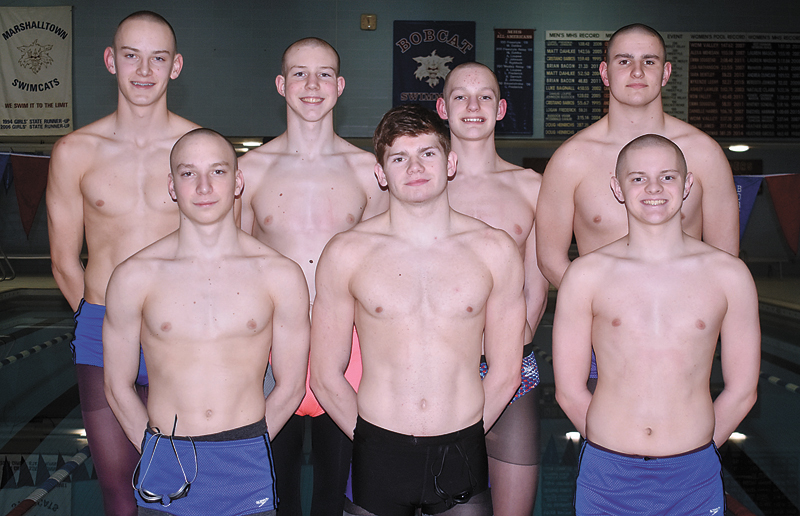 Last season the Marshalltown boys swimming team returned to the state tournament after missing out on qualifications the two prior years.

Just a season later the Bobcats aren’t just heading back to the Iowa High School Boys State Swimming Championships in Iowa City on Saturday, they are doing so with their biggest group of qualifiers in more than a decade.

MHS has nine total qualifications in six different events preparing to swim at the University of Iowa Campus Recreation and Wellness Center, and head coach Mike Loupee said though that’s the most since having nine qualifications in 2006 and 2007, it’s not a surprise after the season his team had.

“We had discussed what we thought our possibilities were if we had a really good taper and how many events and things like that and this is just about where we figured we would be, where we had the opportunity to have guys qualify,” Loupee said during the team’s practice on Wednesday. “We had guys do everything that we asked them to do and we told them what they needed to do to have the opportunity to swim at state and up and down the lineup they did.”

Four individuals and two relay teams make up the nine qualifications for the Marshalltown. Juniors Carson Beals and Nash Perisho and freshman Bryce Edens are all qualified in two individual events. All three will represent the Bobcats in the 200-yard freestyle, with Perisho seeded 14th, Beals seeded 15th and Edens seeded 21st. Perisho is also in the 100 butterfly, seeded 20th, Beals is the 15th seed in the 100 freestyle and Edens is seeded 13th in the 500 freestyle. Senior Ryne Downey had one qualification, as he is seeded 10th in the 100 freestyle.

Of the five individuals who will be swimming for Marshalltown, three in Downey, Beals and Perisho were qualifiers last year, which Loupee said is great both for their preparation and for bringing the freshmen up to speed.

“They know what to expect. When you walk into the University of Iowa pool and the way collegiate natatoriums are set up, it’s big, it’s awesome, it’s intimidating,” Loupee said. “We have enough guys that have been through it before so hopefully it won’t throw them off their game. The freshmen, they follow the upperclassmen and the upperclassmen know what to do. We have a good combination of experience and new and we should be in a good position that the moment and the facility won’t overwhelm anyone.”

Beals agreed with his coach that the experience he got as a sophomore has already made his preparation better.

“Last year I felt like I was a little unprepared. Ryne and I got sick and knowing what’s ahead feels a lot better than last year,” he said. “Last year I was a lot more nervous not knowing what was ahead of me.”

Downey said he also benefits from a couple of extra trips to Iowa City to compete in the pool on the University of Iowa campus this offseason.

“Last year I had swam at the University of Iowa a couple of times, and since then I’ve swam there even more times,” Downey said. “I know what to expect swimming in that pool.”

Not only do a good portion of the swimmers know how to handle the pressure of a state meet, Loupee said he and the coaching staff also benefit from having been to Iowa City last year in the state meet’s first year back on the University of Iowa campus.

“It was everybody’s first time at Iowa City last year, so just to be there for that first time and to know how the [Iowa High School Athletic Association] is doing the parade, is doing the preparation, how they are going to seed us and things like that,” Loupee said. “There is a lot fewer question marks that the coaching staff has to worry about dealing with because the format is set. The state is tweaking a couple of things after the first time but the big picture we know what to expect and we know what we need to do.”

Perisho had a breakout season this year for the Bobcats. He went from not qualifying in anything individually a season ago to coming in with four qualifications, as he is on both relay teams as well as his spots in the 200 freestyle and 100 butterfly.

“It’s been really crazy to think I’ve come so far since freshman year. I just have no words for it,” Perisho said.

Loupee wasn’t surprised by the growth of Perisho, however, as he has done everything the coaching staff has suggested and then some.

“With Nash you tell him what he needs to do and you tell him what we want him to swim and he says, ‘OK’ and then he goes and does it,” Loupee said. “He is a coach’s dream that way. He loves to swim, he is always happy no matter how hard the workout and no matter how tired and beat down they are. He is happy to be in the water.”

Perisho is the first 100 butterfly qualifier for the Bobcats since Aaron Gervich in 2006, and his seed time of 54.26 is just under two seconds away from the school record held by Matt Dahlke of 52.50.

“Since I’m already close to the record in the fly I might as well try to get it on Saturday, and in the 200 I want to get a faster time,” Perisho said.

Beals was a qualifier in the 100 freestyle a season ago, but he didn’t quite have a second event that was strong enough to get to state. That wasn’t the case this season as he has excelled in the 200 freestyle as well as the 100. Loupee said it’s Beals’ constant attention to detail that makes him successful.

“Carson had a great district meet, and every time he came back before I had a chance to talk to him about his race he was telling me what he had done wrong. He was already critiquing himself and looking forward, he’s a competitor,” Loupee said. “He anchors both of those relays, his timing on the exchanges is spot on and he is our competitor, he is the one that is going to get it done on the anchor leg of that relay. We are confident having him as the anchor on both of those relays.”

As for his goals heading to his second state meet, Beals said his main focus is seeing his times continue to go down.

“I want to drop time, obviously,” he said. “I need to drop some times so schools can start looking at me and I can put my name out there, but I want to help the team out as much as I can with my times and that’s about it.”

Downey was a state qualifier in the 50 and 100 freestyle in 2018, but he had a tough showing in the 50 freestyle at the district meet and missed a return to state in the race he focuses on most.

Instead of letting that get him down, Downey bounced back and swam a 47.93 for the 10th fastest time in the state in the 100 freestyle, something Loupee said was great to see.

“As a coaching staff we were pleased, the 50 he identifies as his race, and he could have had his head down and not performed well and he shook it off and came back, I think he felt he had something to prove and he did that tremendously by going 47 in the 100,” Loupee said. “He sits less than a second off the school record in the 100.”

Downey’s eyes have been set on breaking the 50 freestyle school record of 21.33, held by Brian Bacon, and he will still get a chance to break that mark when he leads off the 200 freestyle relay.

In fact, he said not qualifying for the open 50 free might actually be a blessing for his bid for a school record.

“My 200 free relay leadoff time is usually a little bit slower than my other one, just because I’m tired from swimming my two other individuals,” he said. “Since I don’t have my other individual I think I’ll be a lot more prepared and not as tired for it.”

Edens is already one of the top 15 swimmers in the state in the 500 freestyle as a freshman, and Loupee said there’s almost no ceiling on what Edens can accomplish in his career.

“Bryce has been one of our most improved varsity swimmers, as he has acclimated to the increased yardage and the increased workload he has continued to improve,” Loupee said. “It’s exciting to see him swim, he is going to do nothing but get stronger and get so much better in the years to come. I sincerely believe if he continues to develop the way I think we can develop him he is going to be on the podium possibly as a sophomore and I think he can be a state champion before it’s all over.”

Heading into his first taste of action at the state meet, Edens said he is ready to soak it all in.

“I just want to do better than my best and help the team,” Edens said. “Anything else that comes is just extra.”

Like Edens, Loupee said Barker has all the tools to be an outstanding swimmer. Barker just missed out on qualifying individually in the 200 individual medley and the 100 freestyle, and Loupee is also excited for his future.

“Marcus was just right there in the IM and he was right there in the 100 free. He is a big, long kid, and we continue to work on getting his turnover speed quicker, getting those long levers to move faster,” Loupee said. “He did a very good job of that in the 200 free relay and we are going to go with him on the 400 free relay, his open 100 was faster than one of the other guys on the relay and we are hoping that that might squeeze out a little bit more time for us.”

Barker said he is excited to see how everything works at the state meet from the competitor side.

“I think getting an idea for the state atmosphere and the crowd is going to be fun. I have volunteered at a few state meets but I’ve never competed in one,” he said. “I think it will be really fun, I’ve competed in the Iowa City pool before so that will help out a little bit, but still going against people two and three years older than me is going to be a little bit more of an experience.”

After such a great season, going 9-2 in duals and earning the most state qualifiers in 12 years, Loupee said he really isn’t all that worried about his guys showing up and performing well on Saturday.

“It’s all icing on the cake at this point in time,” Loupee said. “We’ve got some work to do, they’ve got some goals and hopefully we stay healthy for the next few days and we go and give it our best shot. We will be happy with wherever we wind up.”

The Bobcats will compete in the Iowa High School Boys State Swimming Championships on the University of Iowa Campus on Saturday, starting at noon.