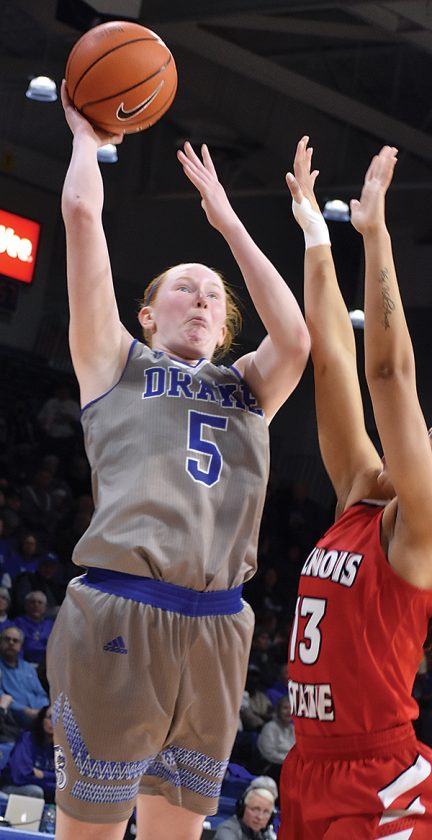 T-R FILE PHOTO - Drake junior Becca Hittner, seen here going to the basket for a shot in their penultimate regular season game against Illinois State, was named the Jackie Stiles Missouri Valley Conference Player of the Year for the second-straight season.

Hittner averaged a league-best 19.9 points in the regular season and she is among the league leaders in several other categories. She is third in 3-point percentage (39.9), fourth in field-goal percentage (48.4) and fifth in free-throw percentage (81.6). She and teammate Sara Rhine, who were both selected as all-conference first-team players, have an MVC-best 14 games with 20 or more points. Hittner has also reached the double figures in 27 of 30 games this year, and she is the third-leading active scorer in the MVC with 1,490 points.

Bachrodt now ends her senior year as a back-to-back defensive player of the year, and she has been on the MVC all-Defensive Team for three straight years. She has also been an all-conference first-team honoree for the the last two years and she was an honorable mention in 2017.

Bachrodt has started all 130 games in her career, and this season she is averaging 9.5 points, 3.7 rebounds, 3.3 assists and a league-high 2.4 steals per game. With 272 steals in her career, Bachrodt needs three more to break Kay Riek’s all-time Drake and MVC steals record that has stood since 1984.

Bachrodt is one of only two Bulldogs to be named an all-defensive player for three years in her career, joining Linda Sayavongchonh who earned the honor in 2003-2005.

Top-seeded Drake will start its run at the MVC Tournament today at the TaxSlayer Center in Moline, Ill., at noon with a game against ninth-seeded Valparaiso.