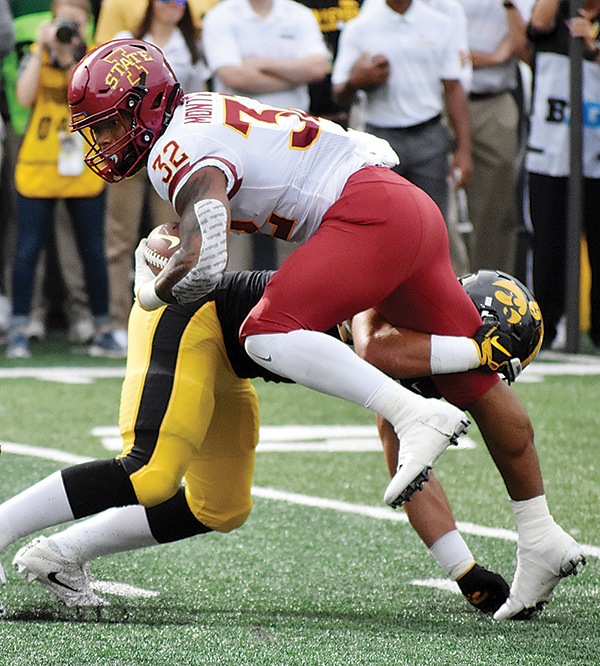 LAKE FOREST, Ill. — David Montgomery used to draw inspiration watching highlights of Walter Payton on his grandfather’s VCR, so consider this a moment of sweetness.

The Chicago Bears addressed one of their biggest needs with their first pick in the draft, trading up with the New England Patriots to take the star running back from Iowa State on Friday night.

Montgomery said he felt “grateful, blessed.” And being drafted by Chicago was particularly special.

“I watched Walter Payton when I was younger,” he said. “Seeing how he ran, trying to correlate a lot of the ways he ran into my game.”

The Bears had a long wait with no picks in the first two rounds for the first time since 2010. They came into the draft in a far different spot after winning the NFC North at 12-4 in coach Matt Nagy’s first season. The Monsters of the Midway ended a string of four straight last-place finishes and made the playoffs for just the second time since the 2006 team’s Super Bowl run.

They sent their first-round pick this year to Oakland in the blockbuster deal for All-Pro edge rusher Khalil Mack just before the start of last season. And they dealt their second-rounder to New England a year ago when they traded up to get receiver Anthony Miller in the second round.

Montgomery is known as a calm, patient runner with size and toughness and a knack for breaking tackles. He ranked third in the Big 12 in yards rushing per game at 101.3 last season.

Montgomery also had 71 receptions over three years despite playing in a run-based offense. And Pace sees someone with “natural hands” who can be a good route runner.

His ability to catch passes out of the backfield is a big plus, considering Nagy’s system favors running backs who can do just that.

Howard’s deficiencies in the passing game made him an odd fit and helped punch his ticket out of town, with the Bears trading him to Philadelphia in March. He went from making the Pro Bowl as a rookie in 2016 and running for more than 1,100 yards in each of his first two seasons to setting a career low with 935 last season. His 250 carries were also the fewest for him, though he still had more combined attempts than the other running backs currently on Chicago’s roster — Tarik Cohen, Mike Davis, Taquan Mizzell Sr. and Ryan Nall. Even with receiver Cordarrelle Patterson expected to get some carries, there still was room for another running back.

In Montgomery, Pace believes the Bears will have an immediate contributor. As impressed as he was with his physical skills, something else stood out.

“There are incredible stories about his work ethic,” Pace said. “Going up to the facility late at night and bringing teammates with him to watch additional tape and get extra work in. You just hear one thing after another about his professional approach to the game, how important it is to him and his work ethic is off the charts. And how infectious that was to the entire team there.”

Chicago heads into the final day of the draft with one pick each in the fourth and sixth rounds, plus two seventh-rounders.

The Bears might look for help at tight end and the defensive backfield not to mention kicker, where they have a major hole. Chicago let Cody Parkey go after one rough season that ended with a double-doink miss off the upright and crossbar on a potential winning field goal at the end of the wild-card loss to Philadelphia. The Bears have three kickers with no experience — Redford Jones, Chris Blewitt and Elliott Fry.

“Looking at the board right now and where we’re at, I feel really good about the draft tomorrow (Saturday),” Pace said. “Like I said a couple of days ago, this is a very deep draft, especially in the later rounds and yeah, I think we’re going to be able to hit a lot of good players tomorrow.”