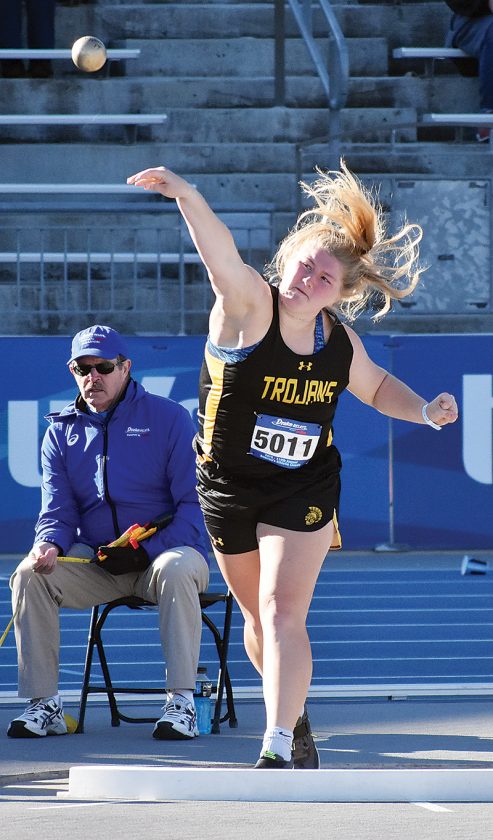 T-R PHOTO BY THORN COMPTON - West Marshall junior Renae Schaper hurls the shot put during the event at the Drake Relays on Friday. Schaper placed 10th in the shot put with a throw of 38 feet, 1 inch.

Puumala had competed on the Blue Oval before in the state meet, but she said the experience of the Drake Relays is unlike any other.

“It was very nerve wracking,” the Mustang senior said. “Me and the girl next to me from Linn-Mar were just talking about how her season has been going and how nervous we were for today. We were just getting our nerves out by talking about it and then we got up to the line and it was just like, ‘alright, lets go!'”

Schaper also has experience throwing at Drake Stadium from last year’s state meet, but unlike at state the shot put takes place on the field and inside the Blue Oval and in front of more fans than throwers are typically exposed to. Schaper said the extra eyes didn’t affect her much, however. 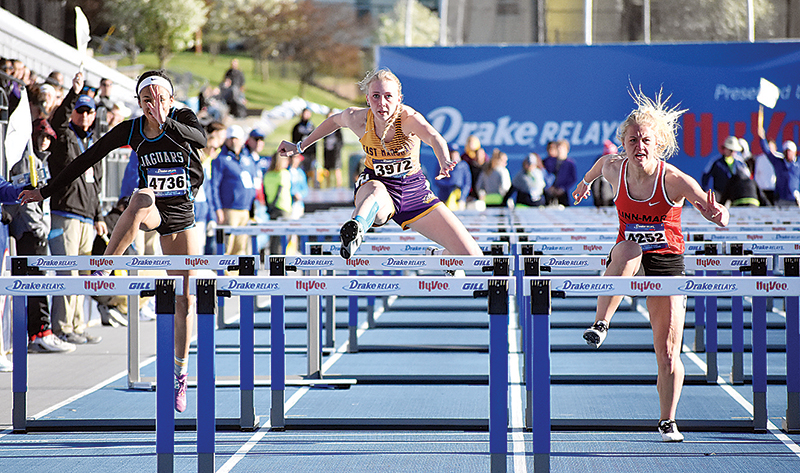 “Actually it wasn’t very different, I didn’t look up into the stands at all so I didn’t feel like I was being watched by thousands of people,” she said.

Schaper also got to cut the tension and her nerves by talking with a familiar opponent in South Hardin’s Brylie Zeisneiss, who finished second with a throw of 45-1 3/4. Jamie Kofron from Tipton, a University of Iowa commit, won the shot put for a second-straight year with a toss of 45-2 1/4.

“Knowing someone on the floor is nice because I could talk with them and get rid of my nerves by having a conversation with somebody I know,” Schaper, who chatted with Zeisneiss and even got to hold Kofron’s winners flag, said. “That was nice.”

While Puumala was 23rd overall, she was actually sixth in her heat and just two hundredths of a second behind fifth, which she said was her ultimate goal.

“I just wanted to stick with the girl on the inside lane, because those are the faster ones, and I did that decently,” she said. “Basically just don’t fall out of the race, that was my big idea.”

Puumala said it was also good to get that race in on Friday because she will be back in action today in the 400 hurdles, a race she comes in seeded 14th. She said she even learned some things from Friday that will benefit her today, particularly in her warmup.

“I didn’t know that there was a warm-up area outside, so I will be using that tomorrow,” Puumala said with a laugh. “I’ll do more hurdle work than I did earlier, I was just kind of walking around nervous to go over hurdles because I didn’t want to interrupt anyone. I just need to do my thing and not worry about other people.”

As for Schaper, she might be done at the Drake Relays for her junior year but she still plans on being back at Drake Stadium for the state championships, and if she were to make it back to the Blue Oval as a senior she will be better prepared.

“I think I thought too much, so I need to relax a little more next year if I make it,” she said.

The third and final day of the 110th running of the Drake Relays starts at 8 a.m. this morning, and Puumala will compete in the 400 hurdles at 1:11 p.m.