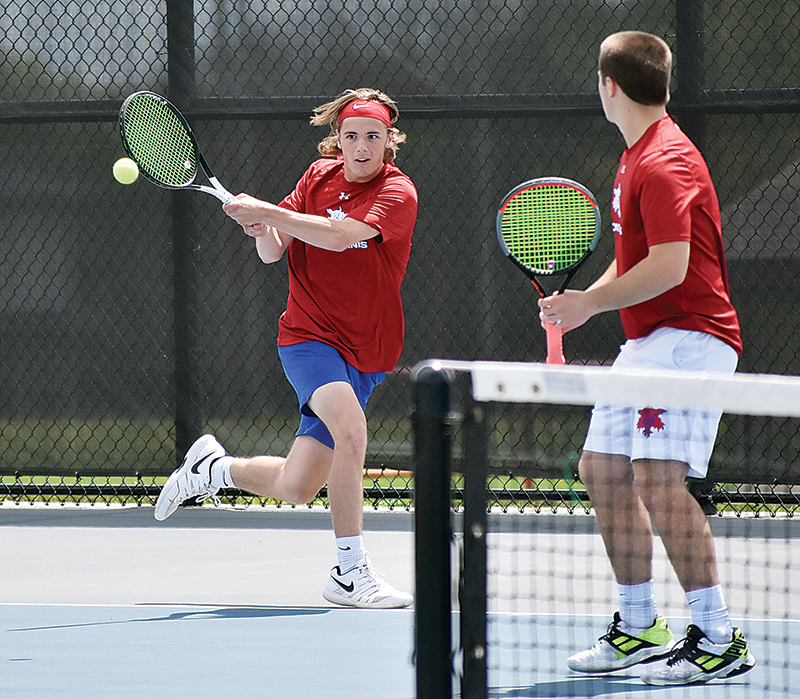 CEDAR RAPIDS — The Marshalltown boys tennis team came into its Class 2A district meet at Cedar Rapids Prairie with lofty goals and a desire to expand upon the success it saw last year at districts, but it left with a sour taste in its mouth.

After having a doubles state qualifier and a singles alternate last year, who all returned this season, the Bobcats not only failed to return anyone to state, they didn’t win a match in the district meet.

“It’s just really disappointing, I feel terrible for the guys,” Marshalltown head boys tennis coach James Christensen said. “They put in a lot of hard work this season to get to this point, we had great records up and down our lineup. Yeah this was a tough draw, but I thought if we execute and come away with some tough wins we could move on either individually or as a team, and that’s probably on me. The guys just didn’t seem prepared to deal with the pressure situations today, we got into a few tiebreakers and a lot of deuce points and that’s stuff we have to play better with and we didn’t today.”

The doubles pairing of Luke Smith and Luke McKibben, who qualified for state a year ago by placing second in districts, started its day with a bye after being seeded second overall. In the quarterfinals Smith and McKibben were pitted against Waterloo West’s Andrew Christensen and Zachary Heyerhoff.

McKibben and Smith started the first match with two game wins and eventually took the first set, but the Wahawk combo fought back and won the next two sets to take the match, 4-6, 6-4, 6-3. 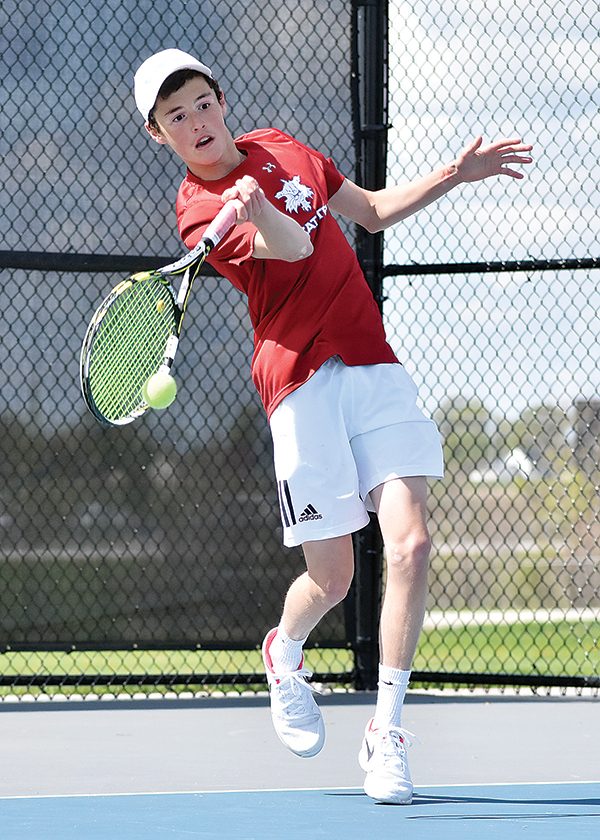 T-R PHOTO BY THORN COMPTON - Marshalltown freshman Kevin Strand makes a forehand return during his first-round match against Thomas Digmann of Linn-Mar. Strand fell in a three-set showdown, 5-7, 6-1, 6-0, in his postseason debut.

“McKibben and Smith, the people they played are a legit team. They just missed out on being seeded, and ultimately they played a game that we had a tough time with,” coach Christensen said. “They were hyper aggressive and really got our guys on their heels, and we weren’t ready to play that finesse game that we tried to, that’s really not our bailiwick. With the wind swirling a little bit we hit a lot of volleys that normally drop in but they were an inch or two out.”

Jack Gruening, a singles state alternate last year, also received a bye in the first round and had to take on Vikashprithvi Ayyappan from Cedar Falls in the quarterfinals. Ayyappan played a slow-paced game to force Gruening into mistakes, which ended up paying off as the Tiger took down the Bobcat in straight-sets, 6-4, 7-6.

“Jack was just searching for his stroke all day,” Christensen said. “He was a couple of inches long here or there, a couple of inches wide, that’s a tough thing to fight through. I think he staved off seven match points there in the second set to send it to a tiebreaker, the Cedar Falls guy was just very solid and made Jack earn every point.”

The other singles competitor was freshman Kevin Strand, and in his first-round match against senior Thomas Digmann from Linn-Mar, Strand actually won the first set in a tiebreaker. He wasn’t able to keep the momentum going, as Strand eventually fell in three sets, 5-7, 6-1, 6-0, but Christensen said that will be invaluable experience moving forward.

“He took it to a third set but kind of ran out of gas, but he’s a freshman and I think he will be back even better,” Christensen said. 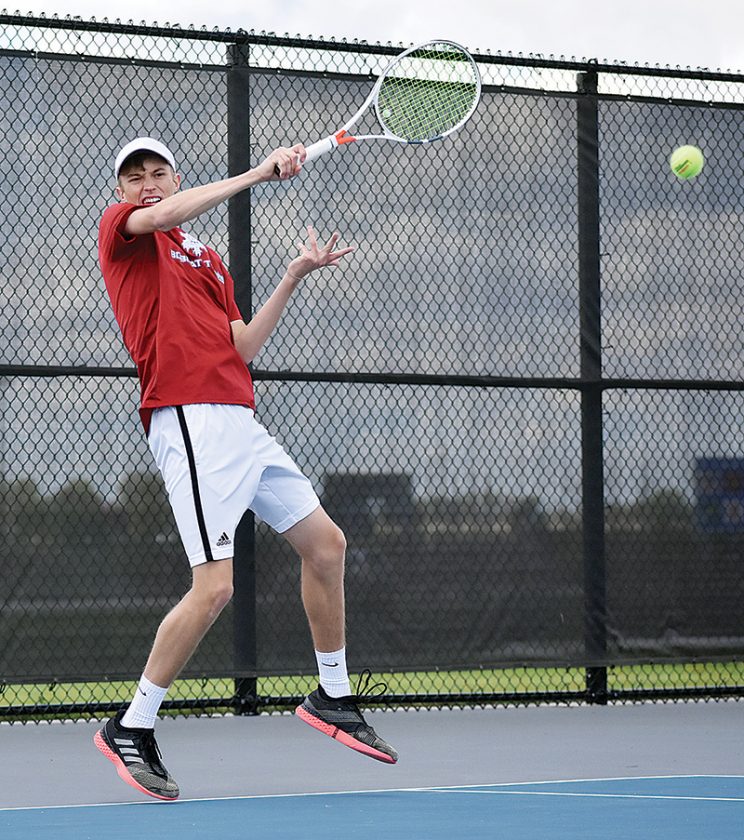 Seniors Jacob Smith and Jacob Eberle made up the other doubles combo, and they also went into a first-set tiebreaker against Nathan Harder and Logan Renner from Cedar Rapids Prairie. Smith and Eberle weren’t able to win that tiebreaker, however, which led them to a 7-6, 6-2, defeat.

“They played a good match but ran into another really good team from Prairie,” Christensen said. “After losing a first-set tiebreak in a pressure situation, Prairie had a little too much for us today.”

Not only not accomplishing the goal of returning to state, but not winning a single match had Christensen understandably somber after his team’s season had ended, but he said looking back on a 9-3 regular season that saw an eight-match winning streak will have some fond memories.

“We had 16 or 17 guys win varsity matches and we have a lot coming back, but today was about the seniors and those guys that aren’t going to be back for us,” he said. “Sending them out on a loss and having today be their final day is a tough thing for me to stomach. I will be up for a while wondering what I needed to do to put them in a better position to win, that will stick with me for a while.”

Christensen pointed out McKibben and Luke Smith in particular as players who have helped grow the program, and their efforts will not be forgotten.

“Those guys came in and have grown a lot over the years. They have shown guys what can happen if you work hard, you can have fun but when it gets down to it you have to grind and get better at tennis,” he said. “Those two specifically subscribed to the, ‘sometimes you have to get worse before you get better,’ idea and both have gone through that process and that’s a tough thing for some of our younger guys to figure out. Those two were able to get worse, figure stuff out and build it up past where they were before.”

After a disappointment like Thursday, Christensen said there’s only one thing his team can do and that’s learn from the experience. And with the likes of Gruening and Strand returning at the top of the lineup next year, he thinks Bobcat boys tennis might be better for it.

“As awesome as our seniors are, and they are going to be super missed, I am still excited about next year,” Christensen said. “We have a huge chunk of freshmen and sophomores and juniors that were challenging for spots all year. Suddenly we have four singles spots open, Jack and Kevin are definitely going to be some awesome leaders for us and we have a lot of other options to contribute.”