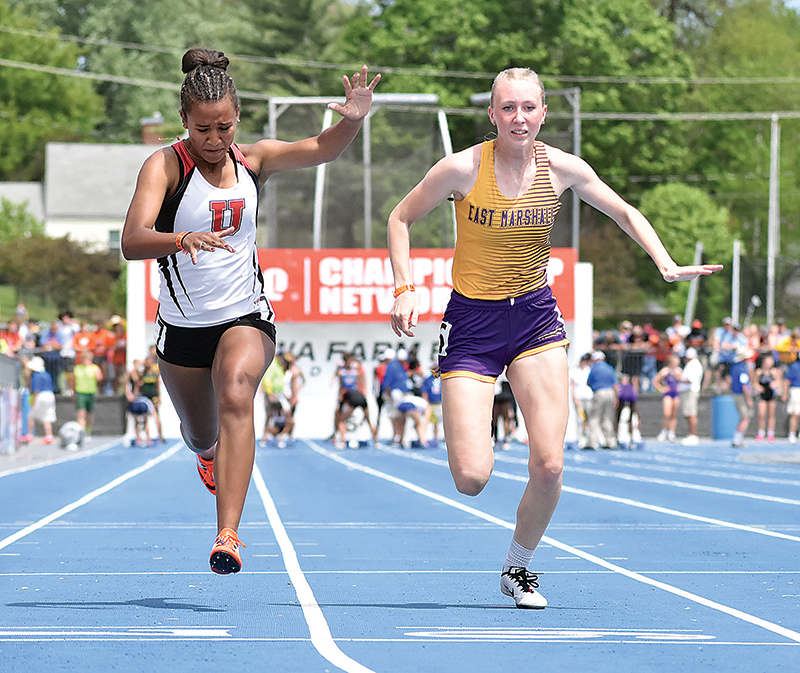 T-R PHOTO BY THORN COMPTON - East Marshall senior Melinda Puumala, right, leans forward at the finish line on her way to a fourth-place finish in the Class 2A 100-meter dash on Saturday at the Iowa Co-Ed State Track and Field Championships in Des Moines. Puumala clocked in at 13.14 seconds, edging out Union Community’s Jasmyn Bush, left, among others in her final high school race.

DES MOINES — East Marshall senior Melinda Puumala lined up in the blocks for the final time as a Mustang on Saturday in the Iowa Co-Ed State Track and Field Championships at Drake Stadium, and in a flash her career was over.

In place of another race, Puumala held a medal, as she finished fourth in the Class 2A 100-meter dash with a time of 13.14 seconds, her second medal of career and the meet.

“It’s really awesome, I’m once again happy I could represent East Marshall in a positive manner,” she said. “I didn’t seed any slower, so I can’t be mad at that.”

“Considering what happened yesterday, I will take that couple thousandths of a second,” she said.

After her final race had completed, Puumala felt both a mix of pride for what she had done and sadness that her track career for East Marshall was over.

“It’s kind of bittersweet,” she said while tears began to stream down her face. “I’m not going to college to run, this was my last race ever, I don’t even have any words. It’s really nice.”

Puumala finishes her career a two-time top-four medalist, and her time of 1:04.06 in the 400 hurdles on Friday to place second is a school record that won’t be touched for some time. At least, she hopes it won’t.

“I know that I have been talking a lot about people from years and years ago, decades really, and I hope that I can be one of those people that is talked about a lot, especially with all of my achievements,” the Mustang great said.

The East Marshall boys also had a race on the final day, with the sprint medley relay team of Landon Elliott, Gage Hulin, Austin Elliott and Korbin Seth placing 21st with a 1:38.39.