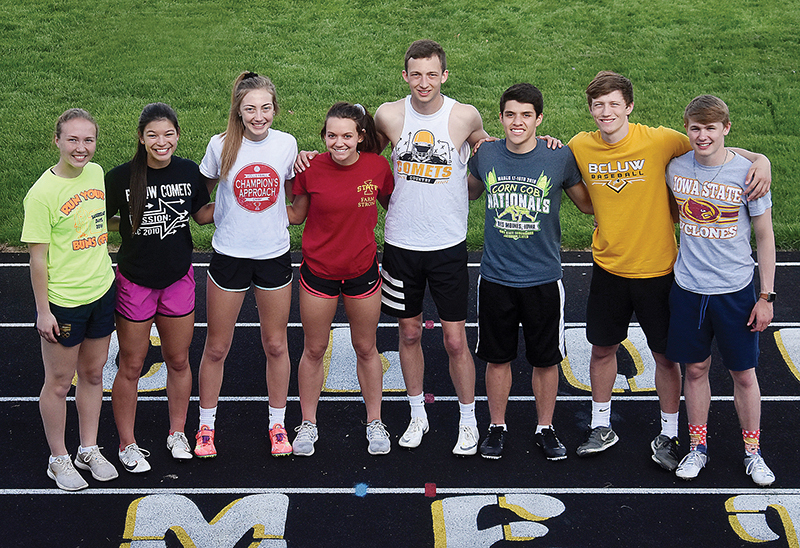 CONRAD — BCLUW senior Jack Garber is known as one of the best hurdlers in the state.

He was second at the Drake Relays in the 110-meter high hurdles with a time of 14.2 seconds a few weeks ago, the 10th-fastest fully-automated time ever run in Iowa high school history. He is an Iowa State University commit and the Comet record holder, but there is one thing Garber doesn’t have.

Last season Garber was the top qualifier in the Class 1A 110 high hurdles after the preliminary races, but in the final he couldn’t manage to break his previous-best time of 14.79 and ended up in third place.

Now he is back in the state meet and is the frontrunner to finally win his first state title, but Garber has more than a gold medal on his mind.

“I’ve been wanting this moment since last year and the year before that, the opportunity to compete for it. I don’t want to just go there and win, I want to set the record,” he said. “Having that record would mean a lot to me to kind of make up for not exactly exceeding expectations the last couple of years. So yeah, a lot of pressure.”

It’s not far fetched for Garber to have his eyes set on the 1A record either. The current state meet record belongs to Cory Woods from Treynor, who ran a 14.41 in 1997. Garber has already proven he can hit that mark, in fact he did it twice on the Blue Oval during the Drake Relays.

He is also leaps and bounds ahead of the field this season. Garber’s qualifying time from his district meet of 14.7, an average time for the Comet hurdler, is four tenths of a second ahead of the second-place qualifier.

Garber said even with the field not quite being up to his speed, he’s not going to let his guard down.

“These guys are still good, they are going to be all-state, but I will have a lot of adrenaline going because if I don’t the same thing that happened last year, I’ll start hitting them, slowing down and losing it,” he said. “I know I’m going to have a lot of adrenaline going because I have personal goals I want to achieve, like that state meet record. It’s not going to be like Drake where I have to push myself against other people, I’m going to be pushing myself because it’s my one shot at that, I don’t get another shot at it.”

Garber also has the experience of fighting through his worst fear earlier this year. During his final run at Drake, he clipped a hurdle just like he did in the state meet a year ago, but this time he handled it differently.

“I started hitting them and saw [champion Austin Larson from West Fork] pass me and was like, ‘well, there’s three hurdles left and there’s not much I can do,'” Garber said. “At Drake it was a little different, I got out and I had it, but I hit one and [Drake Relays champion Trent Davis from Linn-Mar] got in front of me but I said, ‘I’m not going to let this define me,’ because I knew if I let up there I would have gotten passed by everybody. This year I feel a lot better, but I know if I just go do my thing it shouldn’t be close.”

While the 110 high hurdles are Garber’s baby, they aren’t the only thing the Comet senior has a chance to win over the three-day state meet at Drake Stadium. Garber is also seeded second in the 100 and 400 hurdles, and the shuttle hurdle relay team of Garber, Coby Willett, Koty Kruse and Neifer Ralston has the top qualifying mark.

“It’s gonna be very tiring, I’m going to have a lot more stress than just one race. I’m top two in four races,” he said. “The 100, I’m not exactly sure how that happened but I’ll take it for now and I’d be happy with second place but I’m going to try and go get first.

“For the shuttle, we are expecting that first place. We don’t really want to settle for anything less than that, we’ve worked too hard for that. In the 400 lows, I’m going to go out there and I’m going to do my best. Who knows what [Tyson Vander Linden from Lynnville-Sully] will run, I’ll be happy with second but I’m going for that gold.”

Vander Linden will actually be Garber’s roommate at Iowa State, which is a little added motivation for him, but he will also be joined by a current teammate in the 400 hurdles as Ralston is seeded fifth overall.

“It’s pretty cool to have two BCLUW guys in the fast heat of the 400 hurdles, which is an absolutely grueling race,” he said. “It just kind of shows you what our team is like, we have a bunch of hard workers and don’t shy away from the challenges. I’m excited to have a teammate now and a future teammate running with me in that race, I’ve got a lot of guys I want to beat for personal reasons, it should be a fun race.”

Of the six possible hurdle races between the boys and girls 1A state meets, BCLUW will have a representative in every one. Comet boys track and field head coach Anthony Jahr said a lot of the reason the hurdle group is so strong on both sides is because of Garber.

“He could have just kind of settled into the shuttle and the highs, but he’s such a team player in everything that he does,” Jahr said. “He has gotten groups going and it’s just unbelievable how he attacks things and how he supports his teammates and how he is basically our hurdle coach because he is so knowledgeable. It’s clear when you watch him hurdle that, ‘oh, he knows what he is doing,’ but he coaches these other hurdlers too. When you have a guy like that it makes a lot of things easy.”

Jack isn’t the only Garber getting it done on the hurdles either, as his sophomore sister Lizzie is seeded eighth overall in the 100 hurdles with her qualifying time of 16.36. The girls shuttle hurdle of Kiersten Kruse, Payton Pekarek, Olivia Hughes — who also qualified in the 100 hurdles individually — and Lizzie are the top overall qualifier as well, and Jack said seeing so much success in his main event is almost as good as winning races himself.

“That is probably one of the most proud things I could have done this year. We all practice together, we all work hard, it’s in the Comet tradition,” he said. “[Former boys coach Les Penick] was big on that, hurdles is one of those things you can be good at, but to be great you have to put in a ton of time, and that’s what we do here. We put in a ton of time, we work on it hard, keep each other going and hold each other accountable. To be a part of this team with boys and girls having BCLUW Comet in every single hurdle event, that’s pretty cool I think.”

With Jack and the other hurdlers all having a chance at scoring the Comet boys are projected to be fighting for a team title in the meet, but what might make the difference is on the opposite end of the spectrum.

Senior Caleb Silver will also be making his final appearance at the state meet in the distance races, and he has a chance to garner some crucial scoring for BCLUW himself. Silver is seeded fourth in the 1,600 and seventh in the 3,200 individually, and he is part of the 4×800 team that is seeded 15th overall.

A year ago Silver was only a state entrant in the 3,200, which he placed 23rd in, but now he is excited to be back on the big stage with a goal to contribute to his team’s performance.

“Last year, midseason I developed a little bit of a hip injury which caused my times to go up, so I just barely made it to state,” he said. “This year it’s been fun, staying healthy and having a good competition at districts to get those times. It’s great going to state knowing I can be up there and go with those guys.”

Silver isn’t the only distance runner competing, however, as Reuben Montoya also qualified in the 1,600, not to mention the rest of the 4×800 team and the distance medley relay. Jahr said Silver has just as big as Garber when it comes to inspiring his teammates to excel.

“Caleb I think has been overshadowed a little bit by Jack this year, but his season has been unbelievable,” he said. “Same thing with Neifer Ralston, if not for Jack and Caleb he’s all we would be talking about. That’s an awesome problem to have, we have so many seniors that have been great and it’s just unbelievable.”

Silver said it’s actually another Comet coach that helped this recent resurgence in the distance races.

“I’ve got to give credit to Donna Fiscus, our cross country coach. She brought in Reuben and really helped him and he was someone who really pushed me a lot,” Silver said. “You’ve got guys like Treye Teske and Henry Kaisand, and he’s doing awesome as a freshman. It’s great to know they are going to get this experience running down at state.”

Seeing how the team comes together — short races and distance races, hurdles and open, boys and girls — makes Silver swell with pride, especially given what the athletes go through to represent BCLUW.

“Coming from a school that’s made up of five towns, transportation is hard around here,” he said. “It’s great to see all these athletes come together and work for the same goal: to get down there and represent our small school.”

The current projections have BCLUW finishing with 47 points for a second-place team finish, but if the stars aline and the hurdles and distance races compliment each other right, Garber said there’s no reason the Comets can’t come out on top.

“We’ve got Caleb who will do really good things in the distance, our 4×800 team is a bunch of horses, our shuttle hurdle knows what we want to do and then my individual events I obviously want to get those top spots for myself and to help the team out,” Garber said. “There’s never really been a position for me to be a team-first type of thing in the state meet, so it’s different. Coach Jahr was talking about it and he’s really excited, I didn’t even think we could be in the running for anything like this but that’s what happens when you send 11 events and are diversified like we are.”

The Comets will get started in the 1A portion of the Iowa High School State Track and Field Championships in the afternoon session at 2 p.m. on Thursday at Drake Stadium.