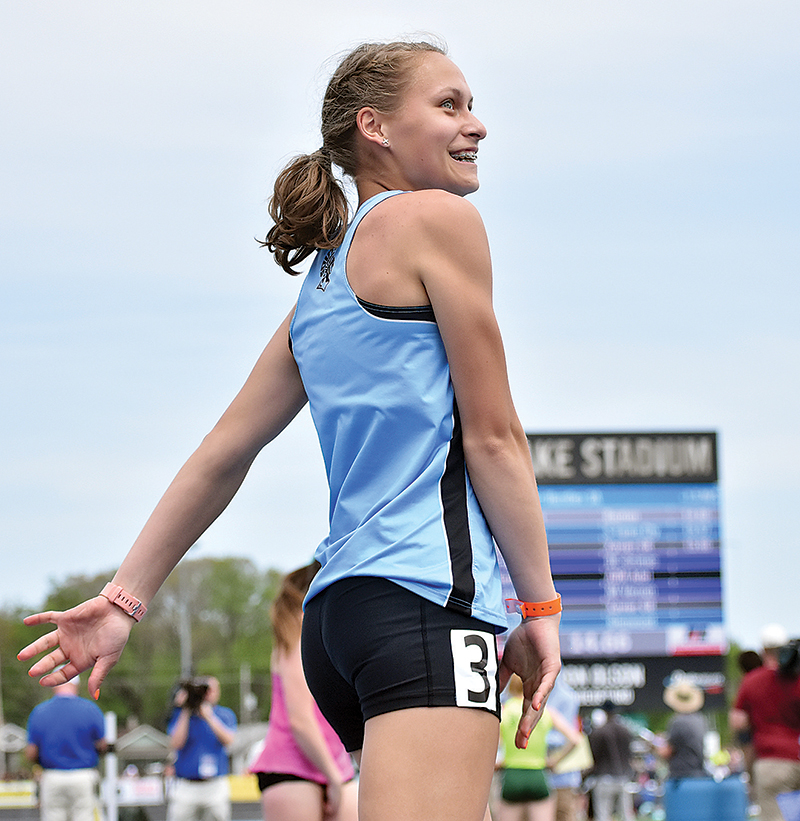 T-R PHOTO BY THORN COMPTON - South Tama County freshman JoJo Tyynismaa looks to her school’s fan base after finishing second in the Class 3A 100-meter hurdles final on Saturday at the Iowa Co-Ed State Track and Field Championships in Des Moines. Tyynismaa clocked in at 15.57 seconds.

DES MOINES — Drake Stadium had already been well introduced to South Tama County freshman JoJo Tyynismaa on the first two days of the Iowa Co-Ed State Track and Field Championships, but on Saturday the young Trojan truly turned some heads.

In tough conditions with a strong headwind, Tyynismaa overcame the odds and the adversity to place second in the Class 3A 100-meter hurdle finals in a time of 15.57 seconds.

“It was really surprising,” she said. “Halfway through the race I could see some of the girls were ahead of me and stuff, but in the second half I just had to run my race and not worry about them, just try to stay where I was.”

Tyynismaa, the only freshman in the field, was so focused on finishing in her best time that she was almost completely unaware of her surroundings, but once she looked up and saw her name listed second with her time she started to skip along the track.

“I didn’t even know what place I finished at first, I knew at least one girl was in front of me, but then I didn’t know how everyone else ended up beside me,” she said of the finish. “When I saw I was second I was like, ‘oh my gosh! That’s so cool!'”

That was second of three total medals Tyynismaa earned on the day, as the South Tama shuttle hurdle team of Tyynismaa, Stacey Slaven, Gracie Vest and Caitlyn Stochl placed eighth with a 1:08.01, and the 4×100 team of Stochl, Ashton Graham, Slaven and Tyynismaa also took eighth with a season-best 50.54.

The girls came into the shuttle hurdle as the fourth-overall seed but a slight slip up by Slaven on the second leg cost them a bit of time. Still, they did well to still run a respectable time, and that had a lot to do with the anchor leg run by Stochl.

“I knew she was going to put everything on herself, but I wanted to finish it for her and run my best for her, that’s really what my goal was,” Stochl said.

There was a few hiccups in the 4×100 as well, but Tyynismaa said she couldn’t complain about both running a season-best and earning a third medal in her state debut.

“That was great, personally Stacey and I had a bit of a rough handoff down there but even though that was rough we still had a personal record, which is really good,” she said.

All week the Trojan girls had worn their blue tops along with black shorts, but in the 4×100 they came out sporting an all-black look with blue lettering, as proposed by Graham.

“We always wear blue, so I was like, ‘why not wear black this time and change it up?'” she said.

Graham now ends her career as a state placer, which she said puts a nice bow on what she’s done.

“It’s a good way to end my four years of high school,” she said.

While Tyynismaa now owns three medals after her first state meet, she still has some catching up to do with Slaven, who finishes her career with three total medals — three in the high jump and two more from Saturday’s relays.

“If you would have told me that as a freshman, I never would have believed that,” Slaven said.

While her days competing for South Tama on the track are now at an end, Slaven said she can look back fondly on what she’s accomplished.

“I am so proud, I came a long way throughout my high school career and I am proud of my teammates,” she said. “I am ready to see them do big things. I’m just going to miss it.”