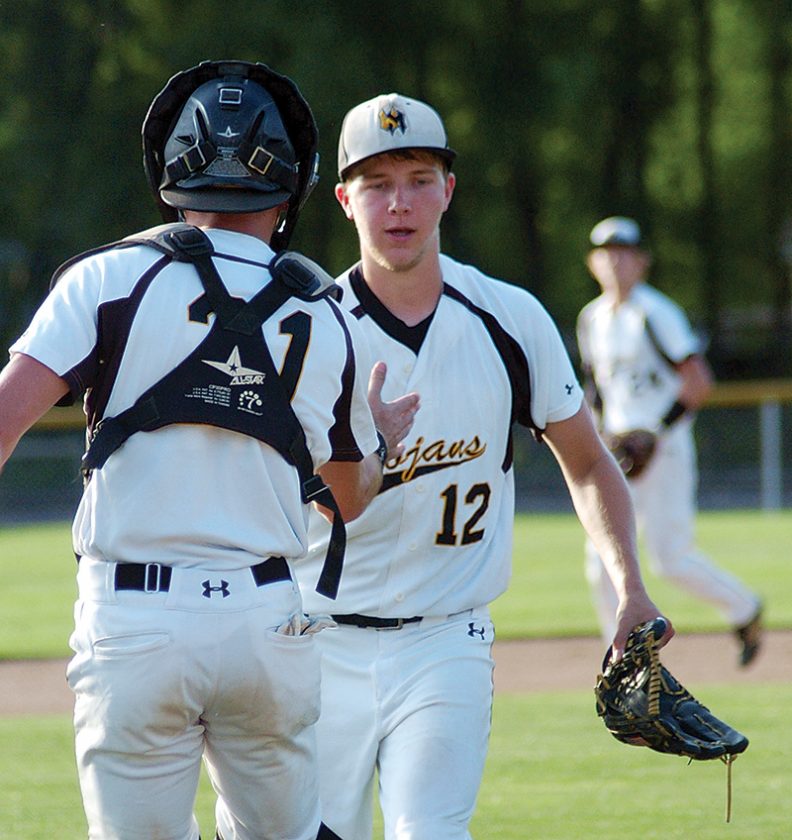 STATE CENTER — It took the Trojans half as long to get twice as many hits as any team has compiled against Gladbrook-Reinbeck right-hander Tyler Tscherter this season.

The Trojan baseball team closed out an undefeated conference slate for the second time in the last three years, doing it in convincing fashion on Friday against one of the state’s top pitchers. West Marshall mashed out 14 hits — 12 in just four innings against Tscherter — and piled up an 8-1 triumph over Gladbrook-Reinbeck (11-9, 7-5) to finish 12-0 in divisional play.

West Marshall senior center fielder Jake Tollefson homered for the third time in as many games, senior left-hander Nat Markle sparkled on the mound and the Trojans (20-4, 12-0) celebrated their entire slice of the NICL West pie with a win against a pitcher they know will make them better down the road.

“[Tscherter] is a great challenge for us, it was one we were looking forward to just because we know he is such a good player, especially on the mound, his stats are very impressive and we’ve seen him before,” West Marshall head coach Jerod Brown pointed out. “We know how good he is, but our kids were really looking forward to the opportunity to do it against a guy like that, which is a great compliment to him.” 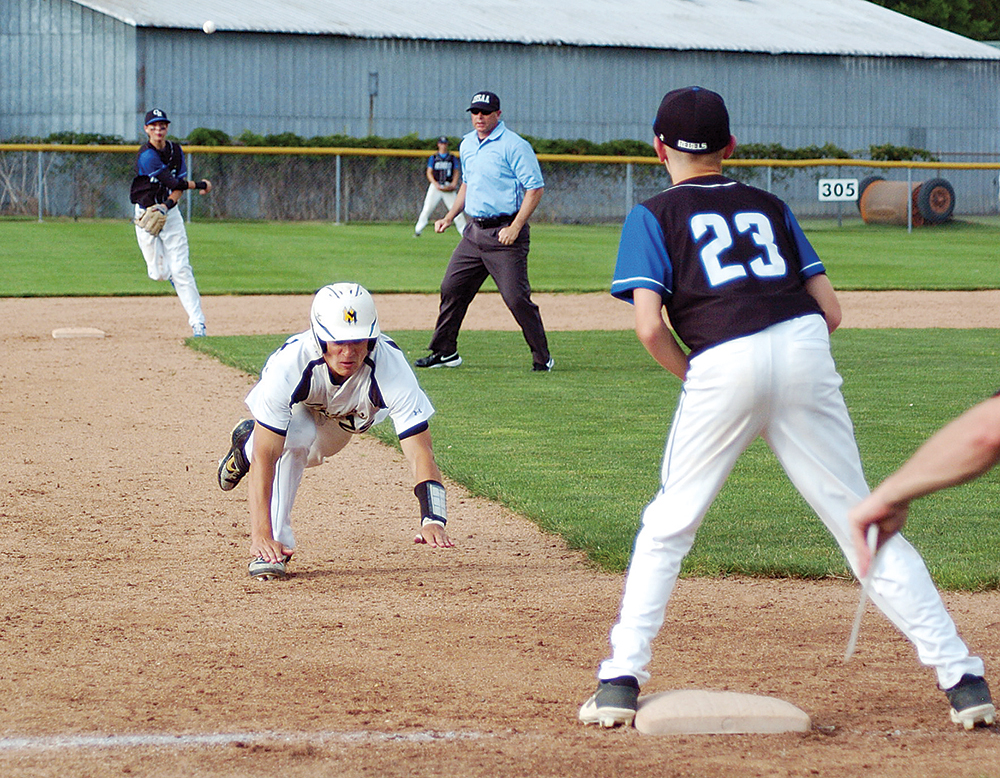 With a junior college scout charting Tscherter fastballs in the late 80s, the Trojans countered with their wily veteran in Markle. A member of the West Marshall varsity squad for each of his five seasons, Markle struck out a career-high 10 batters and baffled Gladbrook-Reinbeck’s lineup with his variance of pitch selections, allowing just three hits while walking one and plunking another in a complete-game performance.

“We didn’t really talk about [going undefeated in conference], we just come into the day trying to go 1-0 everyday,” said Markle. “It’s cool to think about winning it five years in a row.”

Markle did his part this season, going 4-0 in NICL West action with a 0.55 earned run average and 26 strikeouts in 25 1/3 innings. His overall ERA rose from 0.24 to 0.39 with Gladbrook-Reinbeck’s single run in the fourth inning of Friday’s game, but the Trojans already lead 4-1 by that point.

And they kept piling on.

Markle singled to lead off the bottom of the fourth and his courtesy runner Ben Kielman got to trot around the bases when Tollefson lifted a fastball to deep center field and beyond for a two-run homer. Cameron Bannister followed with a single through the left side, Kaden Davis slapped a single to left, and Bannister scored shortly thereafter when Tscherter was called for his second balk of the game. 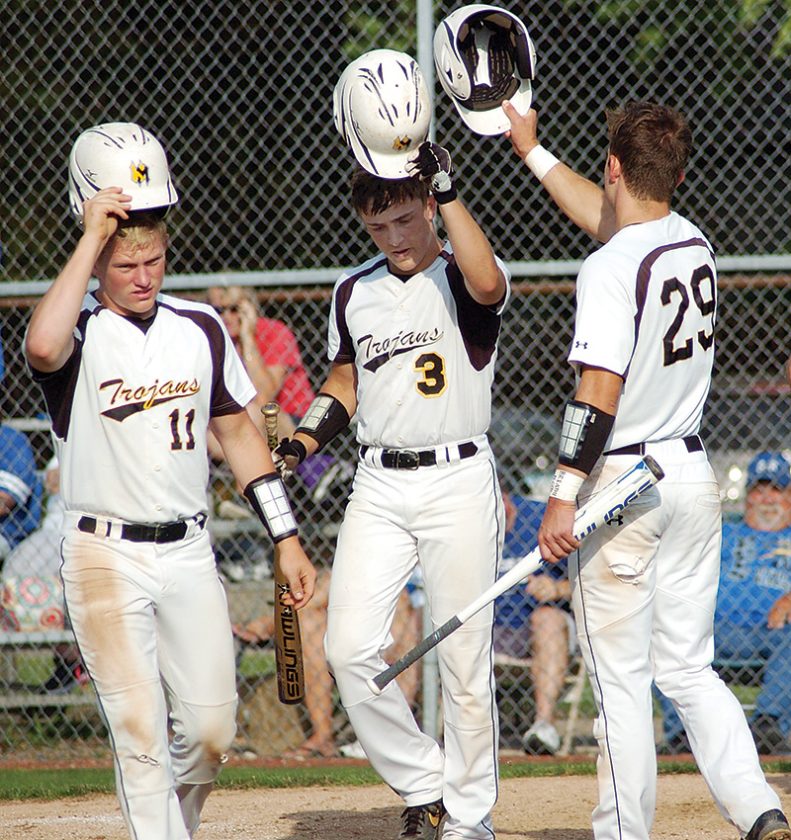 Tscherter didn’t return to the mound for the fifth, having allowed 12 hits and seven earned runs over four frames. He hit one batter and struck out six as his ERA grew from 0.19 to 1.34. He had surrendered just one earned run in his previous 37 2/3 innings pitched this season.

“Yeah, but on the other hand West Marshall is the best team in our league — the best team we’ve played, honestly,” said Gladbrook-Reinbeck head coach Scott Kiburis. “One through nine they hit. That’s the hardest he’s been hit.”

Kinnick Christensen and Brayden Evertsen both finished with three of the Trojans’ 14 hits, including a double for Evertsen to lead off the fifth against G-R reliever Ethan Gienger. Tollefson finished 2-for-4 with an RBI double and his two-run round-tripper, while Bannister was 2-for-3 with an RBI and two runs scored.

Bannister and Christensen hit consecutive one-out singles in the bottom of the first and both would later score on a double by Ryan Reyerson. Josh Larsen and Tollefson had back-to-back doubles in the second, Bannister plated Tollefson with a sacrifice fly and West Marshall quickly led 4-0.

The Trojans didn’t score in the third when Tscherter snared a Gabe Jones comebacker and doubled off Evertsen at first, and they left the bases loaded with an 8-1 lead in the seventh. 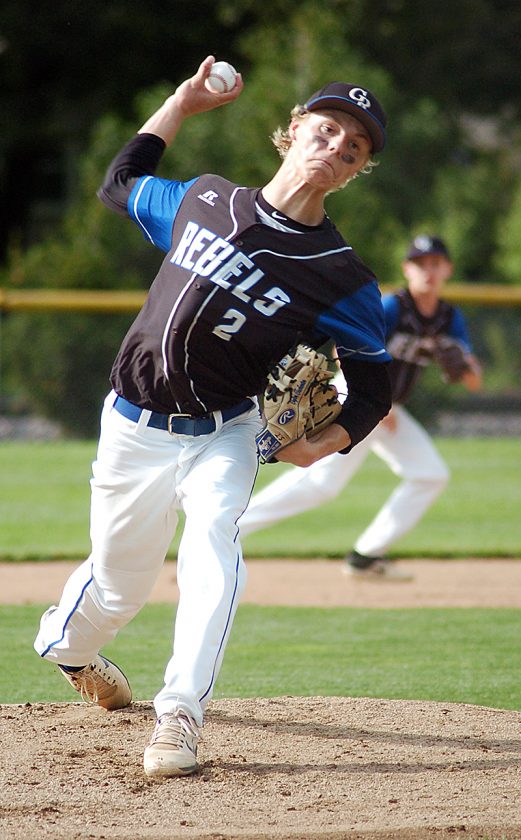 “We’ve been hitting the ball pretty well lately,” said Tollefson, who leads Class 2A’s top home run-hitting team with five. “We’ve got a bunch of guys up and down the lineup who have been putting some pretty good swings on the ball and we started off strong again today.

“It was impressive — he doesn’t get touched up a lot,” Brown said of his team’s hitting against Tscherter. “We came out fast again, and in a game like that you can put pressure on a pitcher of that caliber right away that it gives you such a boost.”

Tscherter had one of the Rebels’ three hits, dropping a one-out triple down the right-field line in his second at-bat one out into the fourth. Keagan Giesking’s flyout to center field allowed him to score, and Jackson Kiburis followed with a single before the inning ended.

The only other hit for G-R was Kale Hasselman’s blooper to shallow center field in the fifth. Back-to-back errors by West Marshall to start the seventh put two Rebels on before Markle walked the No. 9 hitter Aiden Wyatt on a full-count miss with the runners in motion. 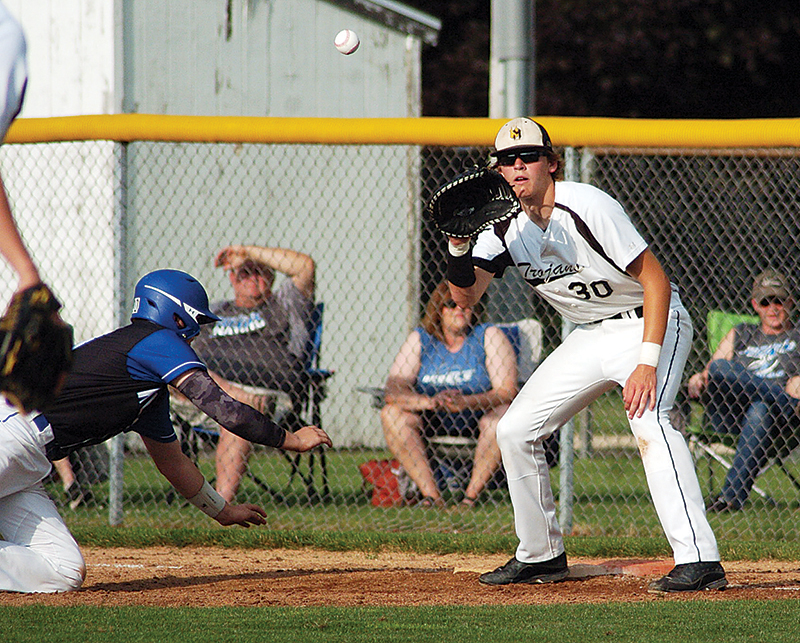 Markle settled back into his groove and got leadoff batter William Kiburis to go down swinging — with Tscherter on deck.

“Earlier in the week I had talked about trying to get him 0-and-3 because he’s a really good player,” Markle said of Tscherter, a junior who ranks second in the state with 10 home runs so far this season. “He’s also one of the three best pitchers we’ve faced this season.”

West Marshall goes out on the road next week for its first three of four games, starting Monday with a trip to Green Mountain for a non-conference game with GMG. Gladbrook-Reinbeck crosses over to the NICL East for a game against Union Community on Monday. 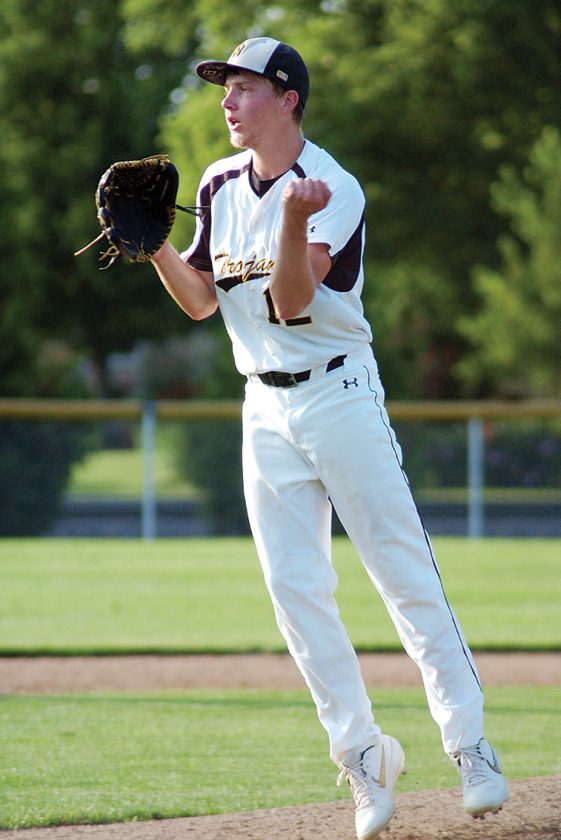