No bombs, no problem for East Marshall 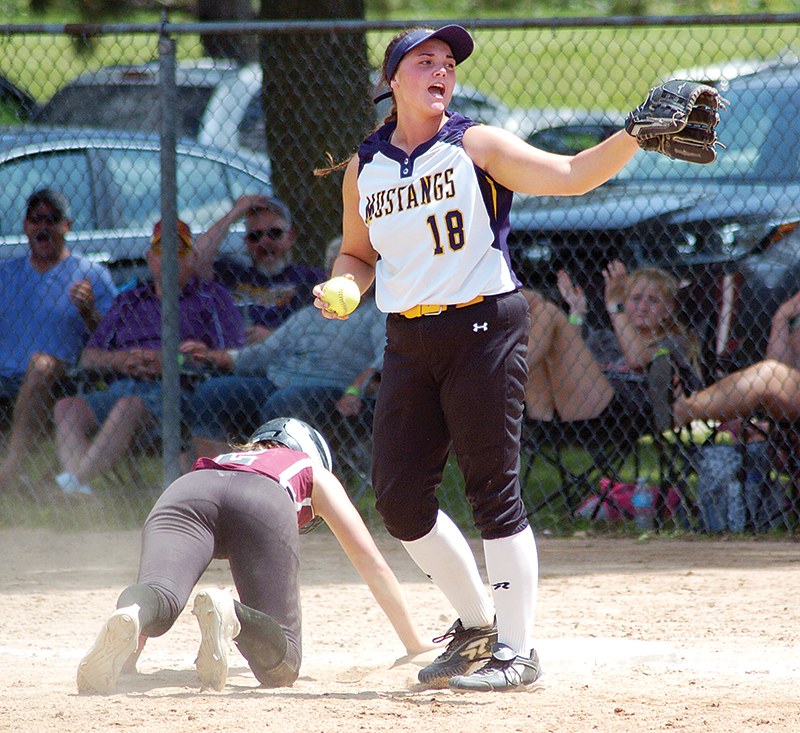 GILBERTVILLE — The Mustangs’ reputation for power hitting proceeds them. But on a diamond designed for more than high school softball, East Marshall was forced to find other ways to win.

The Class 2A No. 9 East Marshall softball team wrapped up a 4-0 weekend at the Don Bosco Tournament with a pair of impressive wins on Saturday, defeating 1A No. 10 Janesville by an 8-2 margin and Pella Christian by a score of 7-1.

Playing on the recreation diamonds of Veterans Park in Gilbertville all but eliminated the idea of hitting home runs, even for the 11th-best home run-hitting team in Iowa, but that didn’t phase the Mustangs (26-4) on a hot and humid day of softball. East Marshall registered two triples against Janesville and one impactful double against Pella Christian, made only one error on defense and got a combined 14 strikeouts from its pair of pitchers to push its win streak to 13 games.

“Good two days, excellent,” beamed East Marshall head coach Jary Hoskey. “The pressure’s off now, obviously the conference is over with so we’re looking to build on hitting and pitching and defense, and we had all of that in the four games we played here this weekend.” 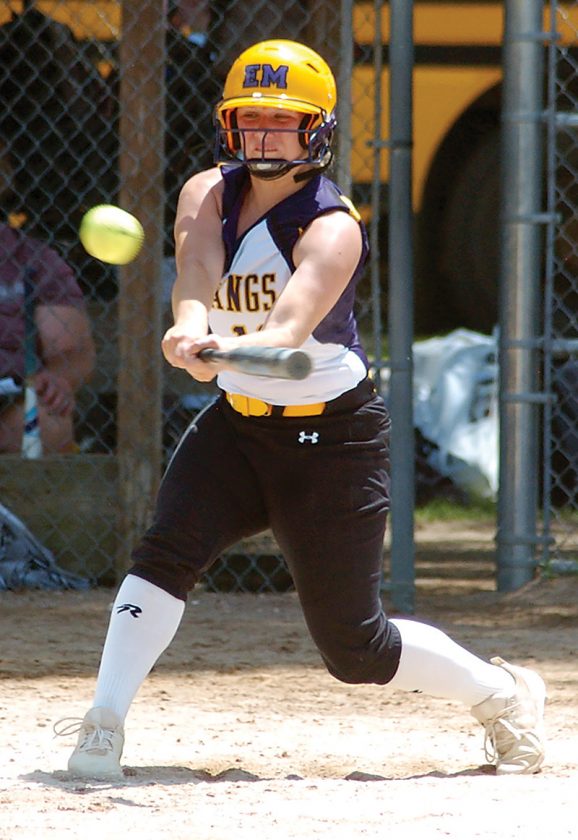 East Marshall senior Maria Rasmusson had a pair of pivotal extra-base hits, one in each game of Saturday’s tournament action. With the score tied 2-2 in the bottom of the fifth inning against Janesville, Rasmusson’s leadoff hit to straightaway center field went for a triple, but she came across to score anyway on an error on the cutoff. That would prove to be the game-winning run. Two outs later, Juliana Arifi tripled to left and scored on a subsequent single by Hannah Birks.

The Mustangs made sure the lead stuck, scoring four more insurance runs in the sixth. A leadoff walk to Kayla Mommer was followed by a bunt single for Emma Pfantz, and both came around to score on a Rasmusson single. Reagan McIlrath and Madison Farrington walked, and Arifi delivered again with a two-run single up the middle to bring the score to its eventual final.

Junior pitcher Kodie Hoskey allowed just four hits, with two of them coming in the Wildcats’ only scoring inning. Janesville took advantage of a walk and back-to-back two-out singles, the last by Naomi Hovenga driving in a pair to even the score at 2-apiece.

Hoskey totaled eight strikeouts and two walks in the win, improving to 15-3 this season.

Pfantz, batting ninth, led the Mustangs going 3-for-3 with an RBI and a run scored. Rasmusson and Arifi both had two hits and two RBIs, with Rasmusson scoring three times and Arifi once. Farrington added an RBI single in the first. 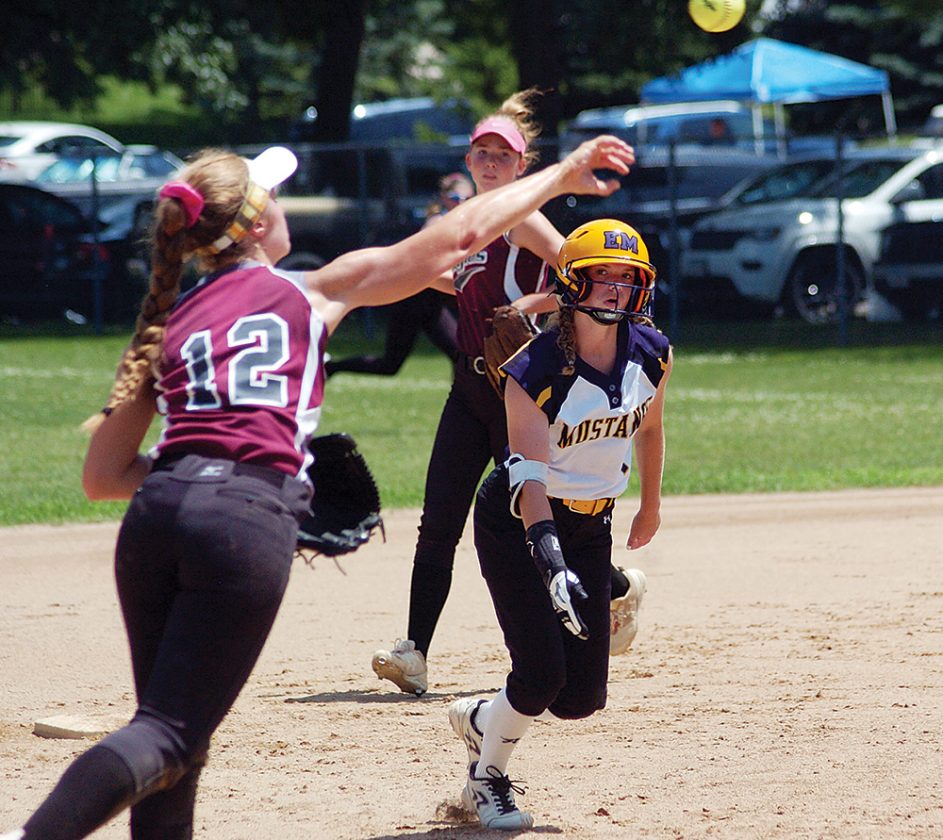 In their final game of the tournament, the Mustangs slogged through the first three innings with only one hit to show for their efforts. Their second, and for Farrington her third time through the order, yielded a seven-run eruption against a pair of Pella Christian pitchers.

Farrington went 2-for-2 in the inning as East Marshall sent 11 batters to the plate, piled up seven hits and capitalized on a trio of Eagles errors to break the game open for good.

“Maria got a big hit,” Hoskey said. “We just needed a spark and we got it and we cashed in on it.”

Farrington, Arifi and Birks led off with consecutive singles, and one out later Mommer blooped a single to right. Farrington’s courtesy runner Abby Ryan scored without a play, but Arifi was caught in a brief rundown between third base and home plate until an error allowed her to score safely.

Pfantz flared a fly ball down the left-field line that dropped out of the fielder’s glove, scoring Birks, and Melinda Puumala reached on a fielder’s choice that retired Mommer at third. 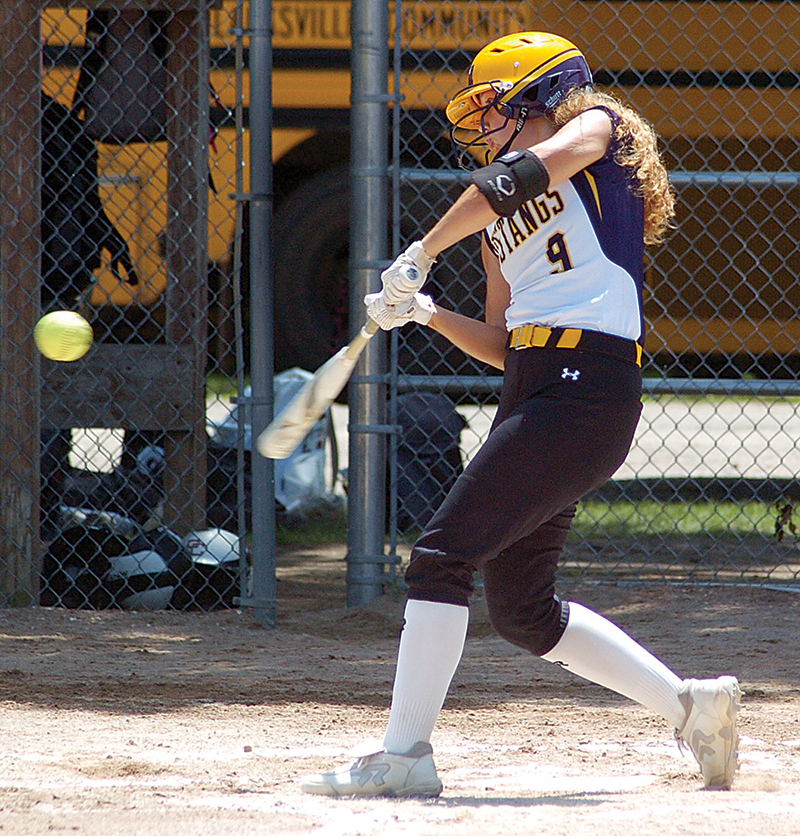 The rally all but stalled out, East Marshall found another gear when Rasmusson blasted a ball into the right-center field gap, making it 5-1 Mustangs. McIlrath and Farrington greeted Pella Christian’s relief pitcher with consecutive run-scoring singles, the last one skipping under the left-fielder’s glove and allowing Farrington to dash all the way to third.

Even in the vast expanses of the Veterans Park’s diamonds, East Marshall proved plenty powerful.

“We were just thinking hit a gapper and sprint as hard as you can,” said Farrington. “As long as everyone’s getting base hits and getting on and we keep hitting them in, home runs are only one extra run. Good hits in the gaps can score runs too.

“We started off so slow, it’s so hot out and this was our second game, but it’s a good thing that inning happened.”

East Marshall didn’t advance to third base in any of its other five at-bats, but one big inning was enough for a team that proved its mettle defensively and in the circle. 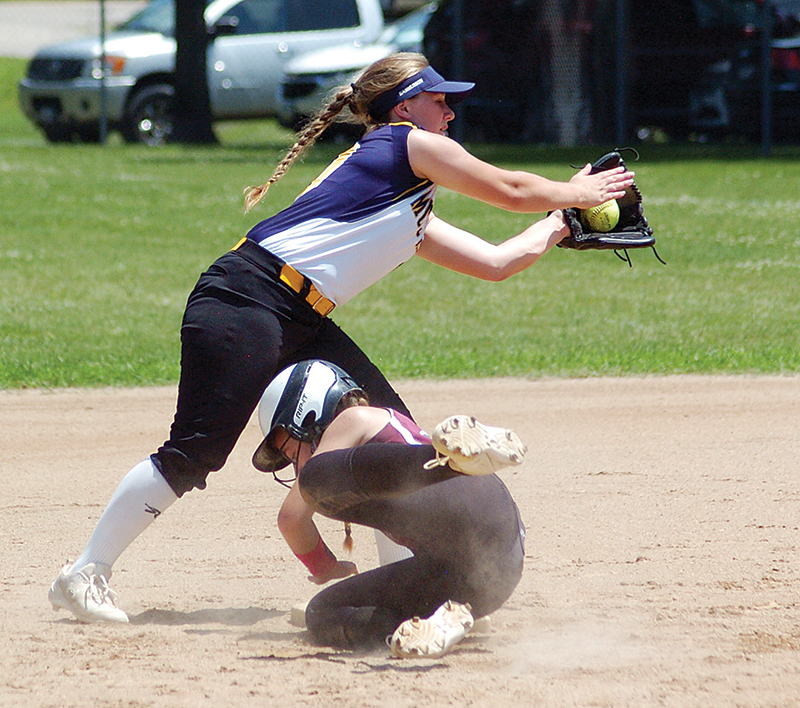 “We still hit the ball hard, but we didn’t have the dingers like we normally do,” said coach Hoskey. “We’re playing good pitching and defense and now we’re starting to move the ball on certain pitchers by making adjustments. I like the way we’re playing right now.”

The Mustangs made their only error of the day in the second game, though it turned out to be inconsequential with McIlrath in the circle. The junior right-hander held Pella Christian to six singles while walking two and striking out six.

“In this heat I’m sure glad we have two pitchers,” said coach Hoskey. “Kodie pitched very well both days and Reagan came in and pitched against Hudson [on Friday] and did a wonderful job against them … and here we played an awful good Pella Christian team and Reag shut them down too.”

Farrington had two of East Marshall’s eight hits against the Eagles, both in the same inning against separate Pella Christian pitchers.

East Marshall’s pitching and defense lived up to the challenge of playing a pair of games without the likelihood of hitting home runs. The Mustangs had homered in six of seven games on regulation diamonds leading up to the tournament and including Friday’s opener against Kee Community played on the Don Bosco High School field.

It shouldn’t be surprising that the Mustangs seemed fine without the round-trippers. East Marshall ranks seventh in 2A having allowed just 63 runs in 30 games so far this season, and the defense ranks eighth with a .951 fielding percentage.

The schedule slows down only slightly this week for East Marshall, which travels Monday to face 2A No. 3 Pleasantville. The Mustangs close out the week next Saturday with games against Grinnell and Colfax-Mingo in Grinnell.

“I think at first at the beginning of the season we found some things we had to work on and we’ve definitely gotten better as the season’s gone,” said Farrington, the senior catcher. “But we’ve also discovered more things. We’re playing a lot of games and we’re lucky to have one practice a week, so when we do we take advantage of that greatly. But next week starts slowing down a bit so we’ll have more practices before regionals, and as long as our hitting’s on and we play good defense we’ll be OK.”

The West Marshall softball team had a less enjoyable weekend at the Don Bosco Tournament, going 0-4 over the two-day event.

Due to Dunkerton dropping out of the tournament on Saturday, the rearranged schedule forced the Trojans to play in back-to-back time slots in the afternoon. In the sweltering heat, West Marshall put up a good fight against a good Waterloo Columbus team before bowing out against the Kee Hawks.

Five of the Sailors’ seven runs came unearned to West Marshall pitcher Loran Nicholson, as the sophomore right-hander struck out four, allowed eight singles and walked only one.

Nicholson also drove in the Trojans’ lone run with her team’s only hit — a sixth-inning double to the gap in left, plating Morgan Cripps who was hit by a pitch to lead off the inning two outs earlier.

Defense proved to be the Trojans’ undoing for the weekend as West Marshall surrendered 17 unearned runs in the four losses. Their tournament finale was no different as the Trojans made four defensive miscues in a 13-3, five-inning loss to Kee.

The Hawks scored six times in the top of the first, however, devoid of defensive errors, against West Marshall freshman pitcher Josie Zahnd. The Hawks got six of their 11 hits in the game in the first frame and had a 10-0 lead in the fourth before the Trojans’ only scoring inning came to fruition.

After the first two batters were retired, Payton Halverson hit a double that sparked the Trojan bats. Consecutive walks were followed by Avery Randall’s two-run single, and a passed ball plated the Trojans’ final run.

Nicholson doubled earlier in the game and Clara Dee added a sixth-inning single as West Marshall was held to four hits by Kee’s Makayla Walleser, who walked seven and struck out three.

The Trojans have three non-conference games to round out the regular season this week, starting with Monday’s triangular with Twin Cedars in Belle Plaine. West Marshall hosts Saydel on Tuesday in the regular-season finale.

T-R PHOTO BY ROSS THEDE – Gladbrook-Reinbeck junior Hannah Quackenbush hammers a two-run double down the left-field line against Aplington-Parkersburg in the final game of Saturday’s three-team round robin in Gladbrook. 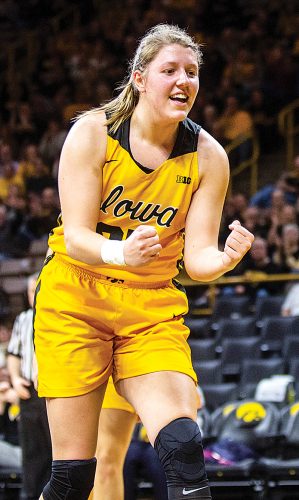 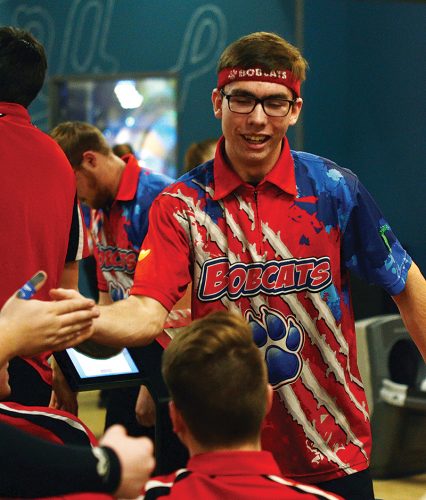