T-R PHOTO BY ADAM RING - Southeast Polk’s Aaron DuToit (17) slides in to home plate just ahead of the tag from Marshalltown junior catcher Will Van Buren during the fourth inning of Monday’s Class 4A Substate 3 semifinal game in Pleasant Hill. The third-ranked Rams eliminated the Bobcats 7-2.

In the opening innings, it was the Bobcats taking advantage of the opportunities Southeast Polk presented them, while shutting down threats the Rams posed. In the latter innings, it was the Rams cashing in on Marshalltown’s miscues. The Bobcats held a 1-0 lead in the fourth inning when the Rams plated three runs and never looked back, taking the postseason contest, 7-2, to advance to Wednesday’s substate final at Ankeny Centennial.

“We knew we had to play well,” Bobcat coach Steve Hanson said. “Southeast Polk is the third-ranked team in the state and there’s a reason for that, because they’re pretty good. We knew our margin for error was pretty slim.

“For four innings, we kind of danced around and gave ourselves a chance. Our goal was to get to the middle innings and be in a position to do something and put some pressure on them.”

Joseph Harris led off the second inning by beating out a throw to first following a third strike swinging passed ball. William Van Buren reached on an error by SEP. Dru Dobbins then drove a double to right field, plating Harris, cashing in on the Ram mishaps. 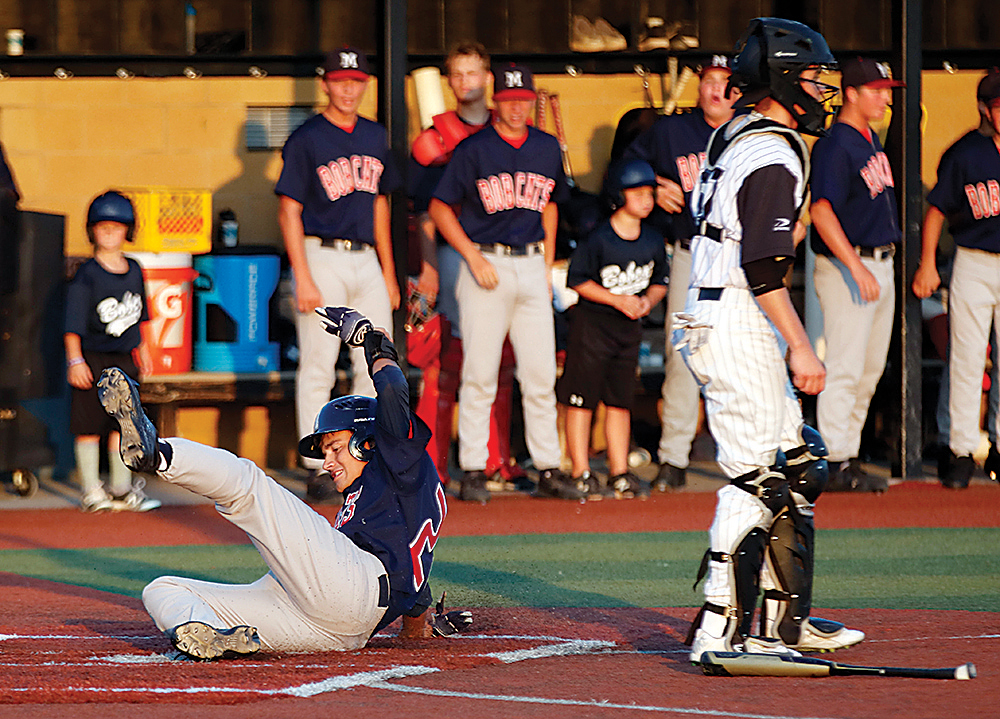 T-R PHOTO BY ADAM RING - Marshalltown’s Dylan Eygabroad, left, slides across home plate with the Bobcats’ second run, scoring on a double by Wade Canaday in the fifth inning of Monday’s Class 4A Substate 3 semifinal in Pleasant Hill.

The Bobcats followed that up with shutting down Southeast Polk’s attempt to tie the game in the third. Kaleb Krier led off the inning with a single up the middle. Tate Kuehner struck Evan Martin out looking and got Adam Schneider to pop out to shortstop. Courtesy runner Xavier Nwankpa then stole second and third base with two outs, but with the tying feet 90 away, Kuehner sat down Carter Olesen looking to strand the threat.

Kuehner tossed five and a third innings on the mound, allowing three earned runs on six hits, walking two while fanning seven but took the loss. Canaday finished the sixth inning, giving up two earned runs on three hits and a walk.

“Pitching was OK,” Hanson said. “Offense had a bunch of chances we didn’t capitalize on.”

The Rams though broke through in the fourth inning.

Calvin Harris notched a one-out infield single. Nwankpa pinch ran, again swiping two stolen bases, and Austin Enos walked to put runners at the corners. Aaron DuToit then drove both of them in with a triple. DuToit scored from third on an error on the throw-in from his triple.

“If you go back and look at the first four innings, we had way more possibilities, opportunities than we thought we’d be offered,” Hanson said. “When you get down to it, we weren’t good enough, and we had chances.

Dylan Eygabroad patiently worked out a two-out walk in the fifth and was driven in on a Wade Canaday double for the Bobcats to get one of the runs back in the next half inning, but more miscues led to SEP stretching its lead.

The Rams stretched the lead back to two at 4-2 in the bottom of the fifth, and plated another trio in the sixth for the eventual five-run lead they would win by. Krier pitched six and two thirds, allowing just an earned run on five hits, walked four and finished with eight Ks. Mason Porepp recorded the final out when the Bobcats had two runners on.

“Our lack of execution, I would attribute to this loss,” Hanson said.