Campbell is a stay-at-home Cyclone 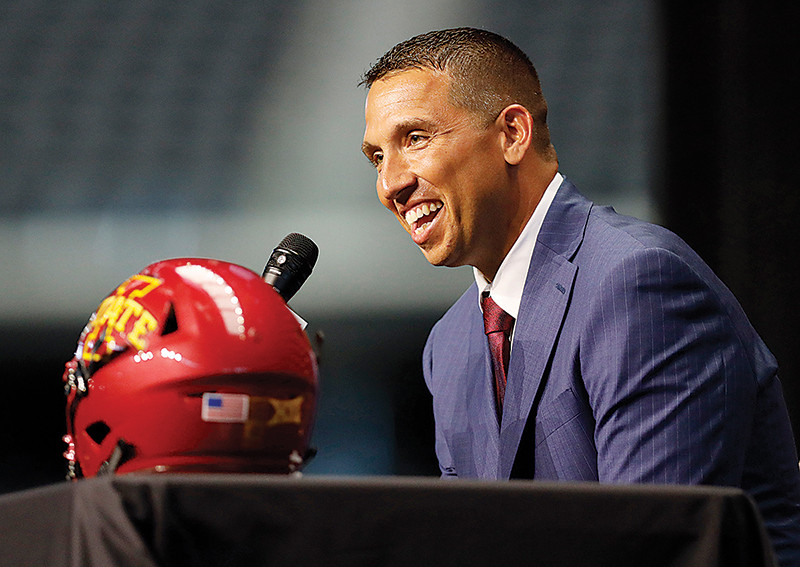 ARLINGTON, Texas — Matt Campbell has never put much thought into being an NFL coach, even though several pro teams expressed interest in the 39-year-old Iowa State coach in the past year.

Campbell is going into his fourth season at Iowa State. The Cyclones, coming off consecutive 8-5 seasons, were picked third in the preseason Big 12 poll — behind only four-time defending champion Oklahoma and Texas, the two teams who played in the league championship game last season.

“My greatest passion is to develop and help 18-22 year-old men go from a young man to a chance to leave as a 22-year-old man,” said Campbell, who was Toledo’s head coach for five seasons before going to Iowa State.

Iowa State is coming off consecutive 8-5 seasons and is the Big 12 preseason pick to finish behind Oklahoma and Texas. The Cyclones have quarterback Brock Purdy, who in 10 games as a true freshman last season threw for 2,250 yards and 16 touchdowns.

The lofty outside expectations are a big change from when Campbell first got to Ames before the 2016 season.

‘Horns down’ on deck

So when is flashing “horns down” considered a penalty and should it always draw a flag?

Greg Burks, the Big 12 coordinator official, said it depends on when and where an opposing player flashes the hand signal that is the exact opposite of the Texas Longhorns’ “Hook ’em horns” gesture.

Burks said Tuesday officials are likely to let it go if someone scores and then turns to their own fans and “it’s real quick.”

An unsportsmanlike conduct penalty comes into play if the gesture if directed at the other crowd or bench — the Longhorns in this case — or it is directed toward another player.

“By rule, anything prolonged and designed to bring attention to the individual rather than the team is a foul,” Burks said.

His advice to those wanting to do “horns down”: do it in the back of their own bench area.

Baylor went from a 1-11 record in coach Matt Rhule’s first season to 7-6 with a bowl victory in Year 2.

Now the question is can the Bears make a similar jump as Rhule’s teams at Temple. The Owls went from 2-10 in his debut season to 6-6 in the second year, and followed that with consecutive 10-win seasons before he got the Baylor job.

“That’s what I would like to do,” Rhule said. “That’s the expectation for me, but it’s way easier said than done.”

Rhule said he judges his teams on how hard they are working. He said these Bears are “the hardest, most industrious groups” he has been around, and work like other Big 12 teams.

New Kansas coach Les Miles says preseason All-Big 12 running back Pooka Williams has been reinstated to the team, seven months after he was arrested and charged with domestic battery in a case involving an 18-year-old woman.

“I did not make this decision, but I stand by it and see it as a right one,” Miles said Monday at Big 12 football media days.

Williams, who will be suspended for the season opener Aug. 31 against Indiana State, went through a legal investigation, and code of conduct proceedings with the university.

“He basically understood very much that if he did not meet the criteria that the board asked that this would not last long,” Miles said. “He’s taken responsibility, he’s been remorseful. He’s learned from this experience, as has our team.”

Williams ran for 1,125 yards and seven touchdowns as a freshman last season.