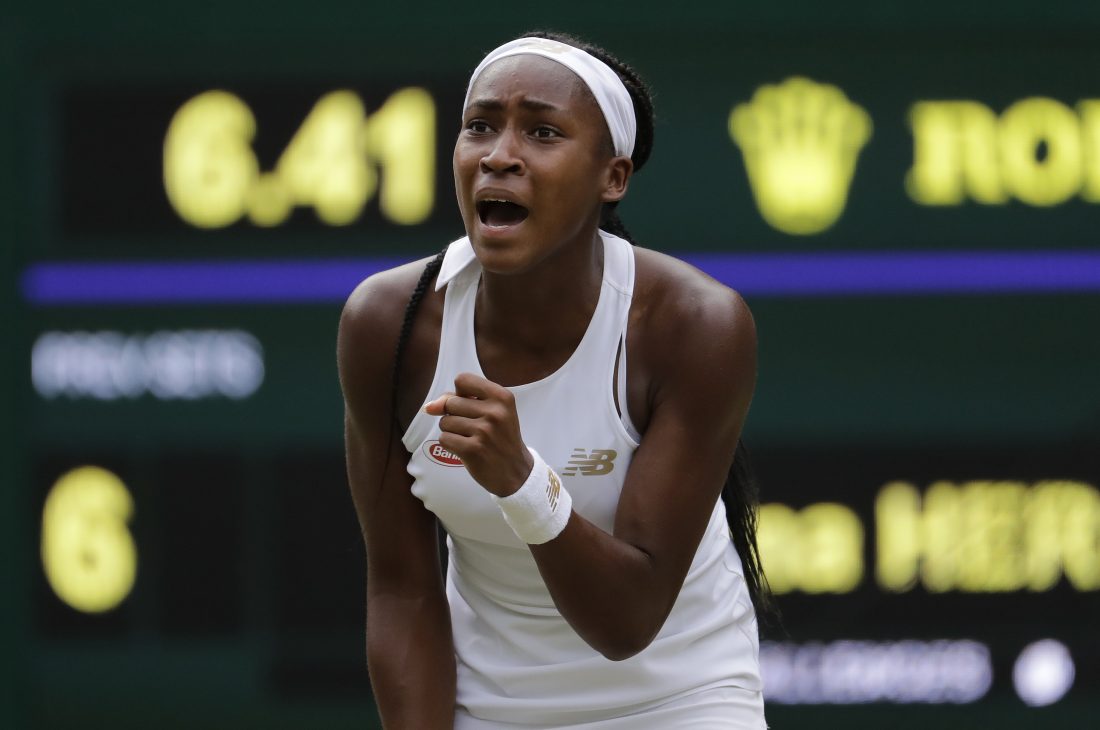 WIMBLEDON, England — It was easy to forget that Coco Gauff is still just 15 as she stood on the grass of Centre Court, pounding her chest and shouting, “Let’s go! Come on!” to celebrate a 32-stroke point that forced a third set in her match Friday evening at Wimbledon.

Up in the stands, Mom rose to pump a fist and yell, “Yes!” Thousands of spectators jumped out of their seats, too, roaring. By then, Gauff already twice had been a point from losing in the third round to Polona Hercog of Slovenia.

Most players, no matter the age, would not be able to find their way out of that sort of a deficit on this imposing a stage, would not be able to handle that sort of stress and figure out a way. Gauff is, quite clearly, not most players. That much has been established. How far can she go, both this fortnight and in the future? The tennis world is watching, waiting to find out.

That Gauff, ranked 313th and facing another unseeded player, was scheduled to appear at Wimbledon’s main stadium says plenty about what a sensation the Floridian already is. That she won this one, and how she did — erasing a pair of match points and coming back to beat the 28-year-old Hercog 3-6, 7-6 (7), 7-5 — offer some insight into what Gauff might become.

“Right now, I’m just super-relieved that it’s over,” said Gauff, who will face former No. 1 Simona Halep in the fourth round Monday. “I always knew that I could come back, no matter what the score is.”

As it is, Gauff was the youngest player to qualify for Wimbledon in the professional era, winning three matches last week against higher-ranked women in the preliminary rounds.

Then, by upsetting five-time champion Venus Williams, who is 39, in the first round of the main event, Gauff became the youngest woman to win a match at the All England Club since 1991, when Jennifer Capriati reached the semifinals at 15.

Next came a win against 2017 Wimbledon semifinalist Magdalena Rybarikova, who is 30.

Against Hercog, who is ranked 60th and is now 0-4 in third-round matches at majors, Gauff dropped a set for the first time this tournament, then trailed 5-2 in the second.

With Gauff serving at 30-40, Hercog was a point from victory. But the teen conjured up a backhand slice winner that dropped right on the chalk.

“I’m happy that the slice down the line went in,” Gauff would say later.

After her aggressive style paid off there, it was Hercog who really went into a shell, playing so cautiously and making mistake after mistake. A big one came when Hercog served for the match at 5-3 and held her second match point: She double-faulted.

They would play for another 1½ hours. Hercog would never again get that close to winning. Gauff didn’t let her.