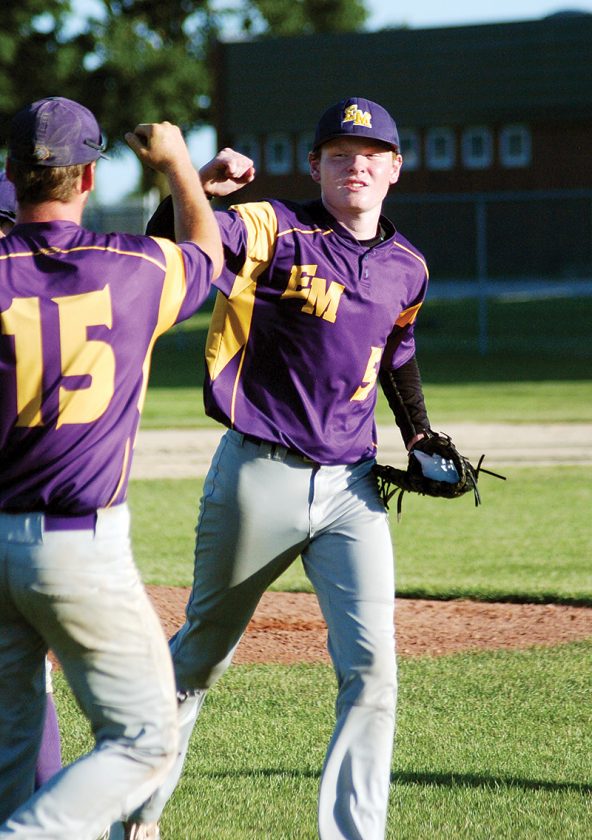 T-R PHOTO BY ROSS THEDE - East Marshall junior Zach Jacobson, right, is congratulated by third baseman Kam Hoskins (15) after striking out the final batter for a two-hit shutout of Lynnville-Sully in Tuesday’s regular-season finale for the Mustangs in Gilman. Jacobson struck out nine for the win as the Mustangs prevailed 8-0.

GILMAN — Not all of the pieces came together, but some of them lined up well enough to give the East Marshall baseball team an idea of what the picture is supposed to look like — and just in time for the postseason.

The Mustangs scored eight runs for the first time in nearly three weeks, got Zach Jacobson’s most efficient pitching performance yet and handed Lynnville-Sully an 8-0 shutout on Tuesday evening.

Jacobson shoved his fastball past the Hawks (10-18) for a dominant two-hit shutout that included nine strikeouts, two hit batsmen and a proficient 81-pitch count. East Marshall (10-17) ground out three runs in the first two innings, pounded out four more in the third and scored at least eight runs for just the fourth time all summer when it tacked on one more run in the sixth.

And as minimalist as it all was — it could have been even better yet for the Mustangs. But Tuesday’s regular-season finale was oddly indicative of the way the season has gone for East Marshall, with some pieces of the puzzle falling into place while others fell off the table.

“I told our kids our margin of error is extremely small because offensively we have not really put it all together yet, so we need to run the bases well, we need to field well, and we need to pitch well because of that margin of error,” said Mustangs head coach Justin Frost. “We have things to work on now for the rest of the week for Saturday.” 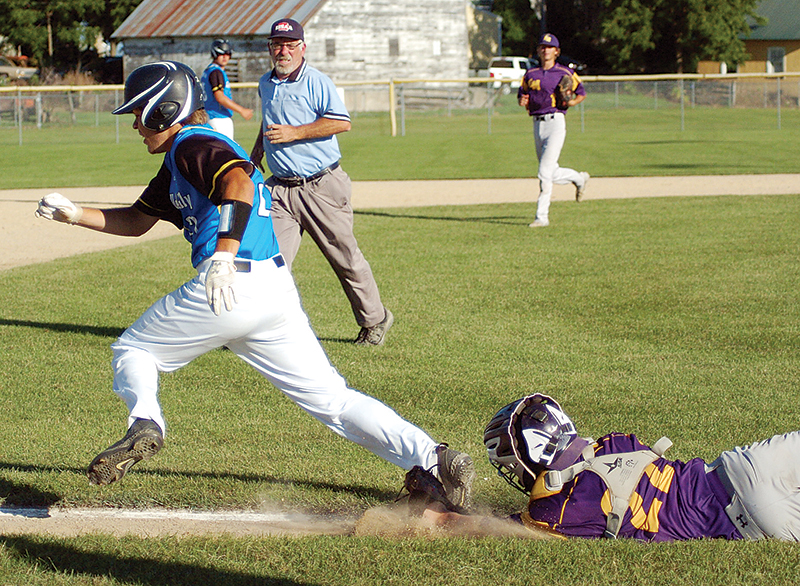 East Marshall opens Class 2A District 10 play with a first-round game at 5 p.m. Saturday at Pella Christian against Williamsburg. The winner advances to face West Marshall next Tuesday night in State Center.

“We haven’t really put it all together yet, which is also a positive because if we can do it during the tournament, maybe we can make a little run at this thing. We really haven’t had a whole lot of practices since the season got going with games, so to have three practices in a row will be very beneficial.”

East Marshall gave itself plenty of wiggle room, working its way to a pair of runs in the bottom of the first inning. Austin Elliott hit a leadoff double, advanced to third on a groundout and scored on a wild pitch before Jacobson singled to left. Courtesy runner Eli Curtis moved up on a passed ball, another groundout and another passed ball to score a 2-0 lead for the Mustangs.

Gage Hulin walked to start the second, stole second and advanced to third when the Hawks failed to field the throw down. One out later, Hunter Vilez got him home with a sacrifice fly for a 3-0 lead.

Elliott started the third inning with another double, moved up on a wild pitch and eventually scored on Jacobson’s groundout. Kam Hoskins followed with a single that allowed Wesley Hamor’s courtesy runner Landon Elliott to score, and Dane Thompson kept the rally going with a single to left. Hulin’s fielder’s choice erased Thompson but put runners on the corners with two out, and Chase Gratopp’s grounder got another run home when the third baseman’s throw forced Lynnville-Sully’s first baseman off the bag. Vilez followed with an RBI single past the third baseman, making it 7-0 Mustangs.

Jacobson, meanwhile, was on cruise control — once he found his lane. An erratic start gave way to more fastballs in the strike zone and curveballs catching the Hawks off-guard, but only when the situation warranted.

“Today I was just trying to pound the zone with the fastball,” said Jacobson, a junior. “I wasn’t trying to throw as many curves today, but it was definitely working when I was throwing it and I’m probably going to try to use that a little more as we go along.”

Jacobson had Nick Rea down in the count before plunking him to start the top of the fifth, and an infield error put two on with only one out. Blaize Kuhlmann followed with a single to load the bases, but the Mustangs managed to wriggle themselves out of the jam. On an 0-1 pitch to Kinnick McFarland, Jacobson bounced a curveball that McFarland attempted to bunt with Rea sprinting down the third-base line for a suicide squeeze. Hamor recovered and chased down Rea, making a diving tag just before third base that forced the other Hawk runners to retreat back to the base they originated from.

Jacobson then finished off McFarland on strikes, foiling the only real uprising Lynnville-Sully could come up with in suffering just its second shutout loss of the season.

“That just goes back to Wes being a great catcher and blocking the ball and making the play,” said Jacobson. “I’m just thankful to have him there behind the plate because I don’t think many other players can stop that ball because it was a wild curve in the dirt.” 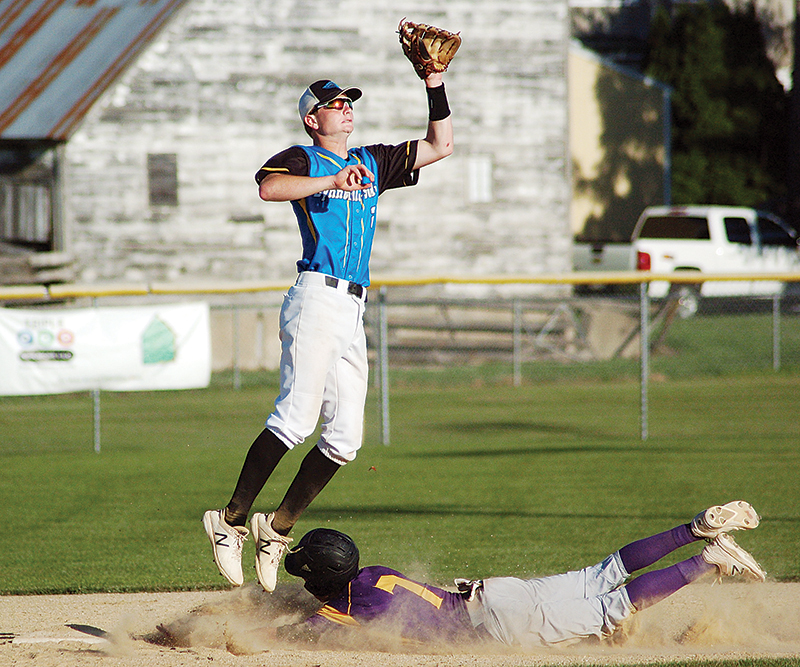 The squeeze attempt surprised everyone.

“I thought the kids did good,” Frost said. “I think maybe we need a little more communication in letting Wes know the squeeze was coming, but we handled it well and Wes ran the kid down and if we did make a mistake we were at least going to force the kid back to third.

“I will admit, though, it caught me off-guard.”

The Mustangs tried to roll the momentum into more runs in the bottom of the fifth, starting with Thompson’s single to left. With Thompson stealing, Hulin’s grounder up the middle was met by the Hawks’ middle infield for an easy force-out at second. Gratopp singled to push Hulin to second, and Vilez blooped a ball to left that landed in front of L-S left fielder Slater Young.

Hulin, however, was still standing on second base by the time the ball landed and was forced out at third on a close play. With a 7-0 lead and their ace on the mound, the Mustangs were still in prime position to win, but they missed their chance to finish the game early. 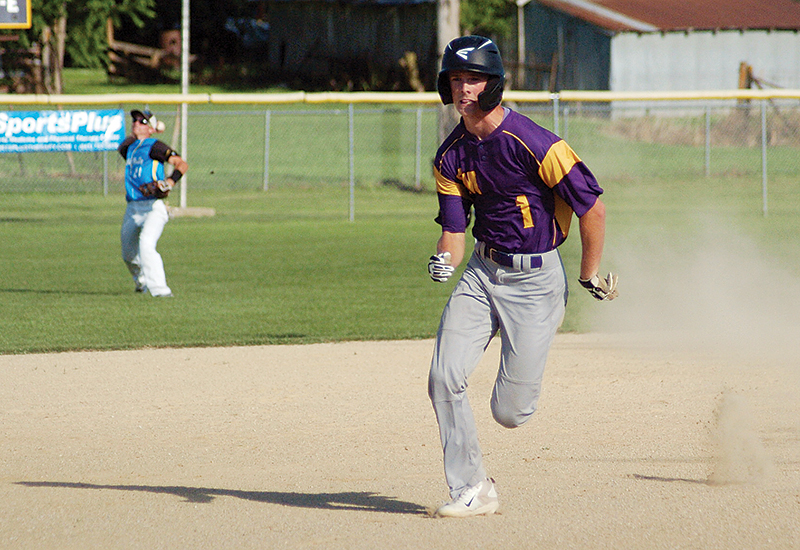 In the sixth, Austin Elliott singled, stole second and scored on Jacobson’s double to straightaway center, but East Marshall couldn’t give their right-hander even one inning’s worth of rest.

Jacobson didn’t mind, especially with the way his center fielder was flying around. Garrett Kerber made one of his two highlight-reel diving catches to help Jacobson get through the seventh, and the Mustangs sealed their 10th victory with Jacobson’s first shutout of the season.

“I guess I just wasn’t always as focused on the shutout and more or less just trying to win each game,” said Jacobson, “but I guess I finally got one here. My defense played really well and my catcher Wes, who I think is one of the best catchers in the state, really helped me out.

“Garrett played really well, he’s been playing out of his mind lately.”

Jacobson, who pitched the first 5 2/3 innings of an eventual 1-0 win over BCLUW on May 29, needed 102 pitches to get that far. He went the distance against AGWSR on June 5 but threw 106 pitches, and held Grundy Center to two runs needing 91 pitches on June 19. 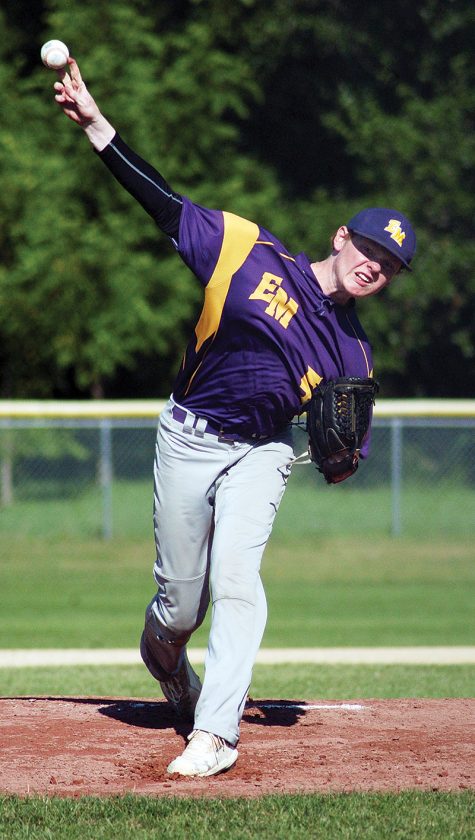 This, by far, was the most efficient outing of his career.

“After the first couple innings he settled in and started really throwing his fastball for strikes and his breaking ball was very effective when he threw it for strikes as well,” said Frost. “If he can get that combination going consistently, he’s really tough.”

Elliott batted 3-for-4 with two doubles and three runs scored to lead off for a Mustang offense that has struggled this season. Jacobson was 2-for-4 with two RBIs, Thompson had two singles and Vilez drove in a pair.

Lynnville-Sully’s only hits were singles from Skyler Sanders in the second and Kuhlmann in the sixth.

“I feel like we have definitely got a lot of momentum coming in,” Jacobson said. “It’s not always been represented in wins and losses, but obviously we came out on top today but we’re really competing and I think if we just keep competing and play clean and swing it up like we did today we can go pretty far.”

T-R PHOTO BY ROSS THEDE – East Marshall junior Zach Jacobson, right, is congratulated by third baseman Kam Hoskins (15) after striking out the final batter for a two-hit shutout of Lynnville-Sully in Tuesday’s regular-season finale for the Mustangs in Gilman. Jacobson struck out nine for the win as the Mustangs prevailed 8-0.