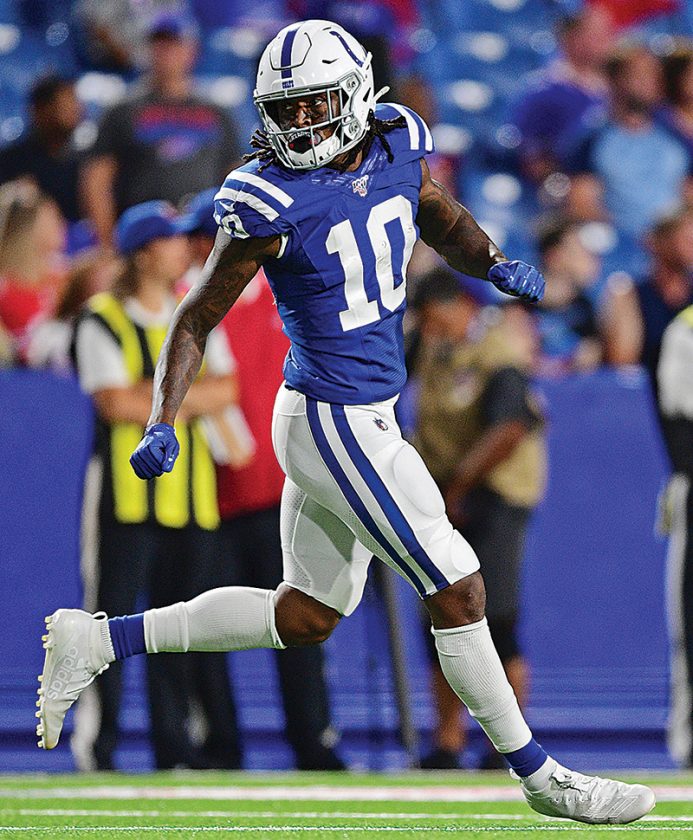 AP FILE PHOTO - Indianapolis Colts’ Daurice Fountain (10) runs a route during the second half of an NFL preseason game against the Buffalo Bills on Aug. 8 in Orchard Park, N.Y. The Bills won 24-16.

The promising second-year player suffered a “significant” left ankle injury that prompted teammates and Cleveland Browns players to take a knee in prayer Thursday during the teams’ second and final joint workout.

“He’s at the hospital, being treated, he’s going to get the best care in the world,” coach Frank Reich said. “We will do whatever it takes to support him and he’ll bounce back. He’ll bounce back. Our thoughts and prayers are with Reece. He’s had a great camp, he’s worked extremely hard and he’s looked extremely good.”

It was a scary scene — and a frightening reminder of just how dangerous this sport can be.

Fountain was injured on a toss sweep and it was unclear what exactly happened before his repeated screams could be heard over a near capacity crowd at Grand Park Sports Campus in suburban Indianapolis. Those near Fountain immediately motioned for the medical staff, which treated Fountain for more than 10 minutes on the field.

While most took a knee, some players from both teams also gathered round the medical staff in prayer before Fountain was put on a stretcher, lifted onto a golf cart and driven away with an air cast protecting his injured leg.

It sapped some of the energy that had been building up throughout the afternoon and clearly shook players.

“I think it was a running play and I think someone ran into him or something like that,” tight end Mo Allie-Cox said. “When I saw his leg, it was kind of crooked and when you heard him screaming, I think that’s what really got us. They were loud screams, and I was like I didn’t want to practice anymore.”

But the practice continued, and a few minutes later Colts receiver Chester Rogers came up limping.

Luck, who continues to rehab from a lower leg injury, wore a red No. 12 jersey and chatted with his predecessor, Peyton Manning, as the two watched. Beckham Jr. is still limited to individual work because of an injured hip.

Neither is expected to play Saturday night when the teams square off for the third time in four days, and Beckham appears to be in no rush to return before the regular season.

“I feel good, I feel great. It’s just the preseason,” he said. “There’s no reason to push anything right now. We play Sept. 8.”

Reich and Cleveland coach Freddie Kitchens might not have wanted their Pro Bowlers on the field anyway.

The practice was marred by a handful of scuffles, most of which ended with players sprinting down the field to gather in circles — partially by design.

“We just have a way that we’re going to treat our practices and that doesn’t ever change, but I think we’ve learned a lot about ourselves here,” he said after challenging his players following Wednesday’s workout. “I think our guys are pretty resilient from the standpoint that we identified a problem last night and we came back and fixed it today.”

Neither team appeared to suffer any serious injuries — aside from Fountain, which could be a huge blow at one of Indy’s deepest positions.

The fifth-round draft pick struggled in his rookie season. He appeared in just one game and recorded no catches in 2018.

But during the offseason, he improved mightily and the 6-foot-2, 210-pound Northern Iowa product dazzled teammates and coaches with one spectacular catch after another including one just a few plays before he got hurt.

“You just don’t want to lose a guy and then to an injury like this, it’s just unfortunate,” Reich said. “I was watching the runner and then I just saw Reece on the ground.”