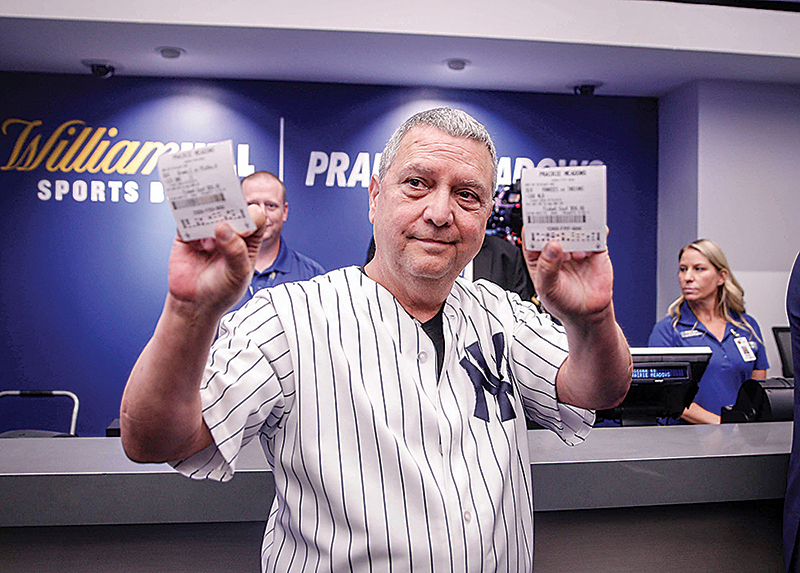 AP PHOTO - State senator Tony Bisagnano (D-Des Moines) holds up a pair of betting slips after placing the first sports bet at the William Hill Sports Book at Prairie Meadows Casino on Thursday in Altoona. Thursday was the first day for legalized sports betting in the state of Iowa.

DES MOINES — Six Iowa casinos began accepting bets on sporting events Thursday, making the state the 11th in the nation and first in the Midwest to allow such wagering.

Casinos in Altoona, Bettendorf, Osceola and Waterloo offered betting on-site and through a mobile app, while casinos in Burlington and Council Bluffs offered on-site betting only until their mobile systems are set up, said Brian Ohorilko, the Iowa Racing and Gaming administrator.

Two more casinos were close to final approval and were expected to be authorized to take bets soon, Ohorilko said. Eventually most of the state’s 19 state-regulated casinos are expected to offer sports betting.

Gov. Kim Reynolds signed a measure in May that allowed sports betting, beginning at noon Thursday. It requires players to first travel to a casino to prove their age and identity and set up an account.

Iowa is the only Midwestern state with legalized sports betting. Indiana is set to start next month, and Illinois has approved it but could be several months away from startup because rules are still being drafted.

That means sports betting enthusiasts are likely to travel to Iowa casinos from adjacent states to sign up and boost business for border casinos including Ameristar in Council Bluffs, where General Manager Paul Czak expects players from Nebraska and Missouri.

“When I looked yesterday Nebraska was 3-to-1 odds to win their half of the Big 10, 12-to-1 to win the Big 10 and 66-to-1 to win the national championship,” he said. “So I would guess there will be a lot of futures bets being placed tonight and this weekend for those kinds of things.”

Iowa’s law requires mobile betting to be done within the borders of the state. Betting software includes precision geofencing technology that nullifies bets made outside of Iowa.

Sports betting is limited to those 21 and older, and the state will collect a 6.75 percent tax on net receipts. Taxes and licensing fees are estimated to bring in estimated annual revenue of $2.3 million to $4 million annually.

At Prairie Meadows Racetrack and Casino in Altoona a ceremonial ribbon cutting marked the opening of sports betting in the state. The first bets were placed by state Sen. Jack Whitver, a Republican, who chose the Iowa State Cyclones to beat the Iowa Hawkeyes at their Sept. 14 football game in Ames.